Senators have shot down a proposed plebiscite on ending non-white immigration.

Senators have killed off any prospect of a national vote on returning to the White Australia policy.

"The bill only asks for a plebiscite to give the Australian people a say on who comes to this country," he told parliament on Thursday.

"I can't think of anything more democratic than that, but apparently everyone else in this room can."

Senator Anning tried to postpone debate on his proposed legislation until next month. 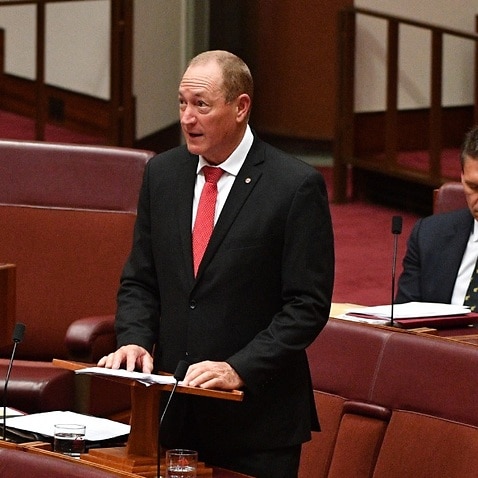 But the government, Labor, Greens and some of the crossbench took the unusual step of refusing the deferral.
Senator Anning's bill was then put to a vote and immediately defeated.

"The quicker the bill is dealt with and consigned to the dust bin of history the better," he told parliament.

"There is no place to debate such racist, xenophobic, hate-filled bills in this parliament."

Labor's Jacinta Collins said postponing debate on the bill would have allowed it to fester.

"We shouldn't allow a matter of this character to sit on the papers and for people looking at the business of the Senate to misunderstand the view of the Senate," she told parliament.

"Australia left behind the White Australia policy 50 years ago and it should remain well in the past."

Government Senate leader Mathias Cormann said the coalition strongly opposed the bill and did not want it to proceed.

"Australia has got a very proud track record over many decades now of welcoming people to Australia from all corners of the world," Senator Cormann told the chamber.

"That has made Australia a richer, better, stronger country."

Senator Anning's call for a division, which would have recorded who voted for and against, was not supported.