Wild weather is lashing Australia’s east and, in some cities and towns, the destruction resembles a war zone. Alongside first responders and insurers, an Australian business is working to keep people safer and in their homes until repairs can be made.

Hailstones up to five centimetres in diameter damaged homes, even cutting through tiles. Large hail stones can cause clean-cut holes in tiles, like this damaged roof in Melbourne.
Source: Downeys Roofing

“When there’s a clean cut like a bullet hole through the tiles then you know those are big hail stones,” builder Matthew Lennox said.

“Those are the hail stones that cause the most damage.”

Experts are assessing the damage and emergency teams are cleaning up, with hundreds of homes reporting damage. 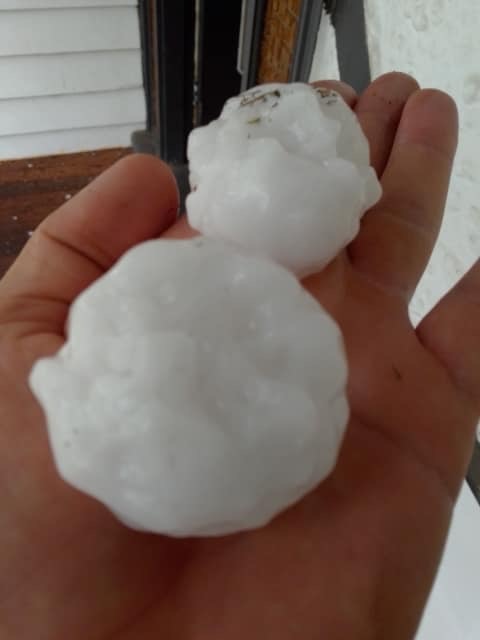 “When you do go through [major storm damage] it’s traumatic, so traumatic,” Mr Lennox said.

"I’ve seen so many tarpaulins fly loose from buildings damaged by storms. Then if another weather event hits, more water damage can occur,” he explained.

His company Stormseal has trained installers in a safer method to protect storm-damaged homes.

Contractors are using a lightweight polymer film that seals the damaged area. He describes his protective technique as ‘shrink-wrap for houses.’

It can cut long-term repair costs by reducing ongoing water damage, he said. Stormseal is heat-shrunk to a damaged roof. The films are hail resistant and Mr Lennox says will remain in place in high winds and rain.

“We have tested Stormseal in 200 kilometre an hour winds, and it’s fire retardant and UV treated. So we can tell insurers and contractors putting it on, that it’ll last 12 months,” he explained.

“It means people can stay in their homes longer-term while insurance claims and repairs are made, which can take many months,” he explained.

Now 47, Mr Lennox has 25 years experience in building and construction. He had the idea for a new way to seal broken roofs while repairing hail-damaged homes in Sydney. Matthew Lennox has 25 years' experience in the building industry.
SBS

“I spent years working with scientists to create a material that would stay put and securely protect a damaged building,” Mr Lennox explained.

“In Australia, we are looking at billion dollar storms now," he added.

“Previously, you were looking at $100 million dollar or $200 million events.

“However, the damage bill from the 2018 Sydney hail storm has run over one billion dollars now,” Mr Lennox said. Storms cause extensive damage to homes, and the repair bills are rising.
SBS

Costs can spiral if water leaks into the roof cavity, collapsing the ceiling and damaging contents, he said.

“We have an increasing population and more houses getting built in storm prone areas, plus the severity rate of storms increasing,” he said.

Stormseal has expanded into the USA and UK, with teams of trained installers securing storm and hurricane damaged properties, including high-wealth homes in the Bahamas. Stormseal has covered hurricane damaged homes in the Bahamas.
Supplied

“We are making a social impact in communities not just in Australia, but globally,” Mr Lennox explained.

“We hope soon to roll Stormseal out in developing countries struggling to cope with natural disasters,” he added.

Stormseal has also received support from the federal government.

“In 2016 we received a $452 thousand commercialisation grant which has allowed us to market our product and help people in Australia, and around the world.”