There’s a lack of new cemetery space in parts of Australia but we could solve that problem by burying the dead among newly planted vegetation belts near our towns and cities, below researcher David Neustein explains his team's the proposal to fix the problem.

Watch Above: Marty has some grave concerns about where we're going to bury our dead.

Burial Belt is a proposal for reinventing the Australian cemetery landscape by creating near-limitless land for burial. The idea is currently on exhibition at the Oslo Architecture Triennale, in Norway.

This new approach to burial would feature native trees rather than rows of headstones.It would reforest cleared land and provide an alternative to high-emissions livestock grazing. It could even prevent suburban sprawl by safeguarding green space in perpetuity.

All it requires is a new way of thinking about what happens to our bodies when we die.

Traditional burial in a local cemetery was the norm for most Australians until late in the 20th century. Today an increasing proportion of Australians choose cremation.

Unlike burial, cremation seems clean, efficient and free of the emotional weight of a sombre headstone in a grid of other graves. Cremation doesn’t have to take up space and ashes can be stored in a special place or dispersed into a favourite landscape.

Cremation now accounts for more than 70% of all Australian interments. That is not surprising when you consider that the average cost of cremation is less than half that of burial.

Soaring land costs and dwindling reserves of existing cemetery space have also contributed to the high cost of burial.

Australian burial plots are among the most valuable real estate in the country.

What else goes up in smoke?

Most people we speak to are surprised to learn that cremation is an energy-intensive and toxic process.

The energy consumed by a single cremation is equal to about one person’s average monthly domestic use.

Each cremation releases on average about 50kg of CO2 and other toxins.

When you consider both the economic and environmental costs of cremation, the obvious solution is to provide more affordable burial space.

But with scarce land available for this purpose close to our city centres, any solution is contingent on persuading large numbers of people to not only return to burial, but to reconsider the entire cemetery experience.

The Burial Belt proposal relies on a societal shift from traditional burial and cremation to natural burial. Natural burial does away with embalming, wooden coffins, concrete shafts and expanses of tarmac.

Bodies are placed in direct contact with the soil and buried within reach of microbes, where they can then truly return to the earth.

Natural burial is also much cheaper to implement than traditional burial.

Where would this take place? That’s where the Burial Belt proposal comes in.

Our future burial parkland already exists, just beyond the outermost suburban lots that ring Australian cities. This border land is currently occupied by sheep and cattle pastures but is increasingly being rezoned and amalgamated into an ever-expanding urban footprint.

Converting this territory into burial parkland, rather than housing subdivision, would protect whatever wildlife and vegetation remains in this cleared and denuded landscape, while curtailing urban sprawl.

The key element of this proposed transformation is that, while natural burial land quickly becomes indistinguishable from bushland, current legislation provides for preservation of cemetery spaces in perpetuity.

Incorporating burial within the forest establishes a covenant over the revegetated grazing land that cannot be reversed. No more urban sprawl.

Fields and allotments would be individually acquired by public or private entities and converted into burial forest. Adjoining sections of forest would be gradually amalgamated into a single Burial Belt, a linear green swathe that halts further development and protects agricultural land and remnant habitat on the other side. 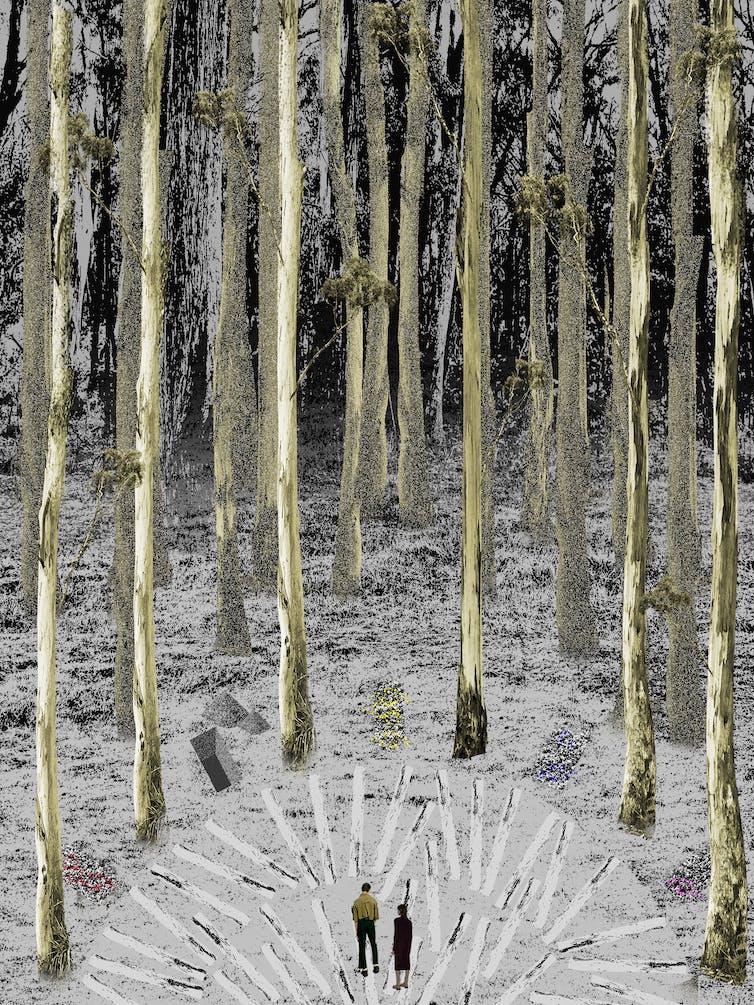 View of a burial ring at the edge of a clearing in a proposed Burial Belt. Other Architects, Author provided.

From an architectural point of view, there are many ways this general idea could be implemented to suit different site conditions and communities.

In the current proposal, large clearings are carved out of the immensity of the forest, with smaller hollows containing intimately-scaled burial spaces dispersed around the edges of these clearings.

Access could be provided via boardwalks and other temporary facilities similar to those found in national parks. The proposed forest cemetery requires little upkeep. Rather than returning periodically to sweep away leaves or lay flowers on a loved one’s traditional grave, visitors are free to let nature do its work.

There is no reason why the Burial Belt idea could not be widely implemented by local operators and councils as an effective method of funding habitat regeneration while providing for the community’s long term burial needs.