President Donald Trump has been accused of putting his "head in the sand" after saying that the wildfires raging across the West Coast were "about forest management".

Top officials in West Coast states where record-breaking fires have killed 31 people accused President Donald Trump on Sunday of being in denial about climate change, as he prepared to meet emergency services workers in California.

"This is climate change, and this is an administration that's put its head in the sand," said Los Angeles mayor Eric Garcetti, speaking on CNN's "State of the Union."

Mr Trump plans to meet Monday with the heads of California's emergency services, battling history-making infernos that have now burnt through nearly five million acres (two million hectares), an area roughly the size of New Jersey and an annual record - with nearly four months of the fire season still to come.

Officials warned of further fatalities with swathes of land in California, Oregon and Washington still cut off by flames fueled by tinder-dry conditions of the kind climate change causes.

Mr Trump has made little comment about the blazes in recent weeks, but at a Nevada campaign event on Saturday he acknowledged the scope of the disaster.

"They never had anything like this," said Mr Trump, who systematically downplays global warming.

Mr Garcetti hit back, saying that "anybody that lives in California is insulted by that." A woman holds her dog after several days of staying in a tent at an evacuation center at the Milwaukie-Portland Elks Lodge in Oak Grove, Ore.
AP

"Talk to a firefighter if you think that climate change isn't real," he said.

"We need real action. We need to reduce the carbon emissions that we have. And we need to make sure we can manage this water. This isn't about forest management or raking."

Democratic presidential candidate Joe Biden said Saturday it was "undeniable" that "climate change poses an imminent, existential threat to our way of life."

"Over the past few years, CA has experienced some of the largest, most destructive wildfires in history - fuelled & intensified by the climate crisis," she wrote.

Over the past few years, CA has experienced some of the largest, most destructive wildfires in history—fueled & intensified by the climate crisis.

While Trump denies the evidence of this crisis, @JoeBiden will get to work taking the drastic action we need on day 1 to combat it. https://t.co/NNWHl4aJjT

Worsening the sense of doom, all five of the world's most air-polluted cities Saturday were on the West Coast, according to IQAir, with dense smog and ash coating the atmosphere from Los Angeles up to Vancouver in Canada.

"It's maddening right now we have this cosmic challenge to our communities, the entire West Coast of the United States on fire, to have a president to deny that these are not just wildfires, these are climate fires," Inslee said.

'Dropped out of the sky'

More than 20,000 firefighters are battling the blazes, with officials warning that cooler weather could end Monday as warmer, drier conditions return.

Most of the fatalities have occurred in California and Oregon, with emergency services in the two states recording 30 deaths.

Among them was a 13-year-old boy in Oregon, found in a car with his dog in his lap. The road was so hot it had melted the tires as he tried to flee.

Preparations have been hampered by online claims that "extremists" are intentionally setting fires in Oregon, which have been debunked by the FBI. 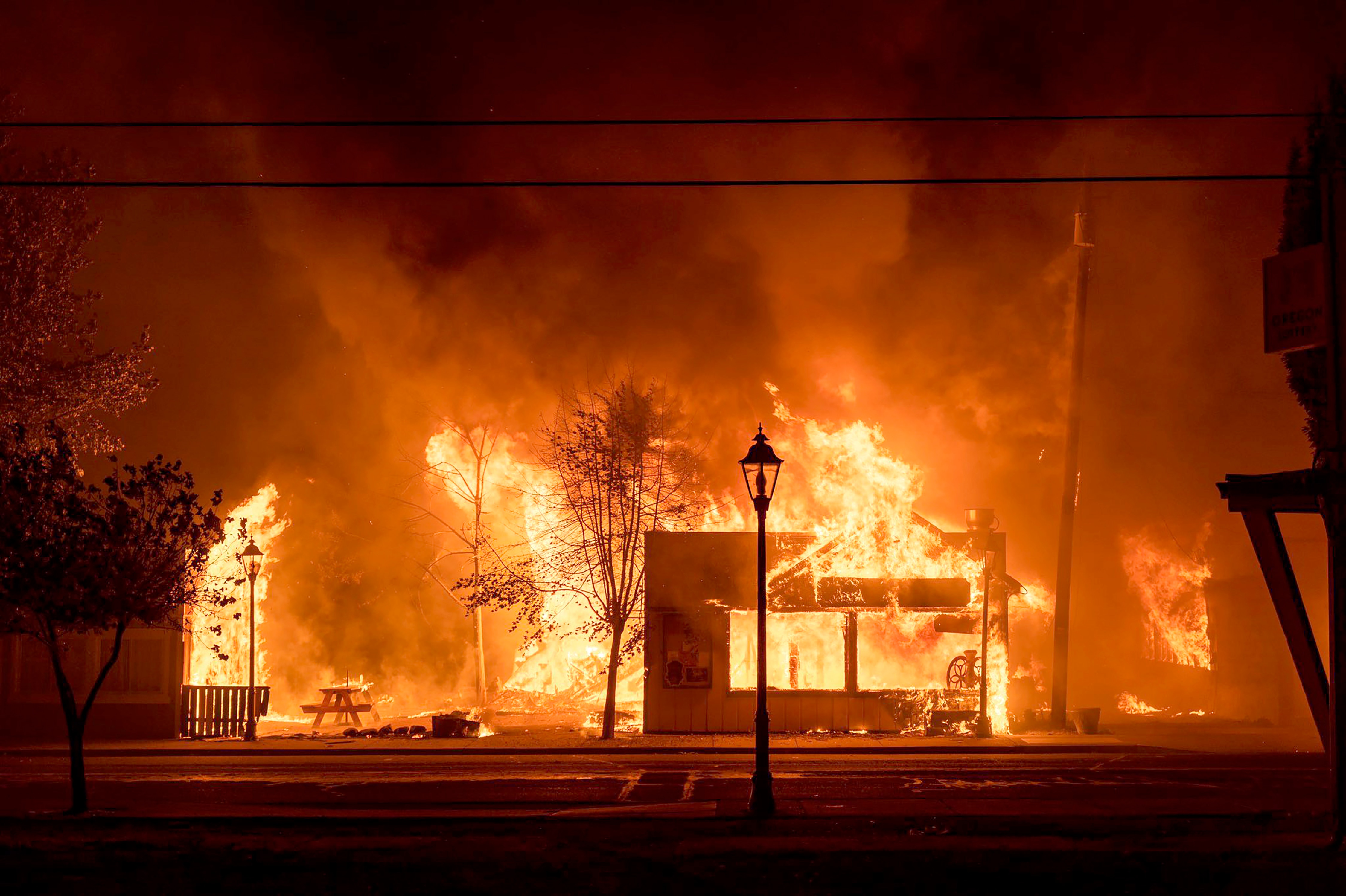 Buildings are engulfed in flames as a wildfire ravages central Oregon.
AAP

In Estacada, a rural Oregon town just miles from a fire, that was deserted earlier this week, some inhabitants returned from evacuation Saturday and patrolled the streets with guns for fear of looting, according to an AFP reporter.

Others holed up indoors as thick, acrid smoke hung in the air and fresh layers of ash from nearby blazes continued to blanket the streets.

Police in Multnomah County, where Portland is situated, issued a notice threatening arrest to armed residents who had established roadblocks near their communities.

Joy, a 56-year-old woman sheltering outside Portland who declined to give her last name, told AFP that she and her daughter don't know if their house in Aims - a short drive east - is still standing. They decided to evacuate when they saw a flying bird had "completely dropped out of the sky".

"If it's killing God's creatures, I don't want to die too," she told AFP.

In California, Butte County sheriff Kory Honea said additional officials had been brought in to check for human remains, but it was too hot to search.

In a rare sliver of good news, one believed fire victim in Butte County turned out to be a burned anatomical skeleton from a local classroom.

Victoria's restrictions on gatherings, weddings and outdoor events to ease after no new COVID-19 cases recorded