Despite being tipped that “Congress itself is the target” on 6 January, Capitol Police were ordered not to use their most powerful crowd-control weapons, according to a scathing new watchdog report.

The US Capitol Police had clearer advance warnings about the 6 January attack than was previously known, including the potential for violence in which “Congress itself is the target".

But officers were instructed by their leaders not to use their most aggressive tactics to hold off the mob, according to a scathing new report by the agency’s internal investigator.

In a 104-page report, the inspector general, Michael A Bolton, criticised the way the Capitol Police prepared for and responded to the mob violence on 6 January. The report was reviewed by The New York Times and will be the subject of a Capitol Hill hearing on Thursday (local time).

Mr Bolton found that the agency’s leaders failed to adequately prepare despite explicit warnings that pro-Trump extremists posed a threat to law enforcement and civilians and that the police used defective protective equipment.

He also found that the leaders ordered their Civil Disturbance Unit to refrain from using its most powerful crowd-control tools - like stun grenades - to put down the onslaught. 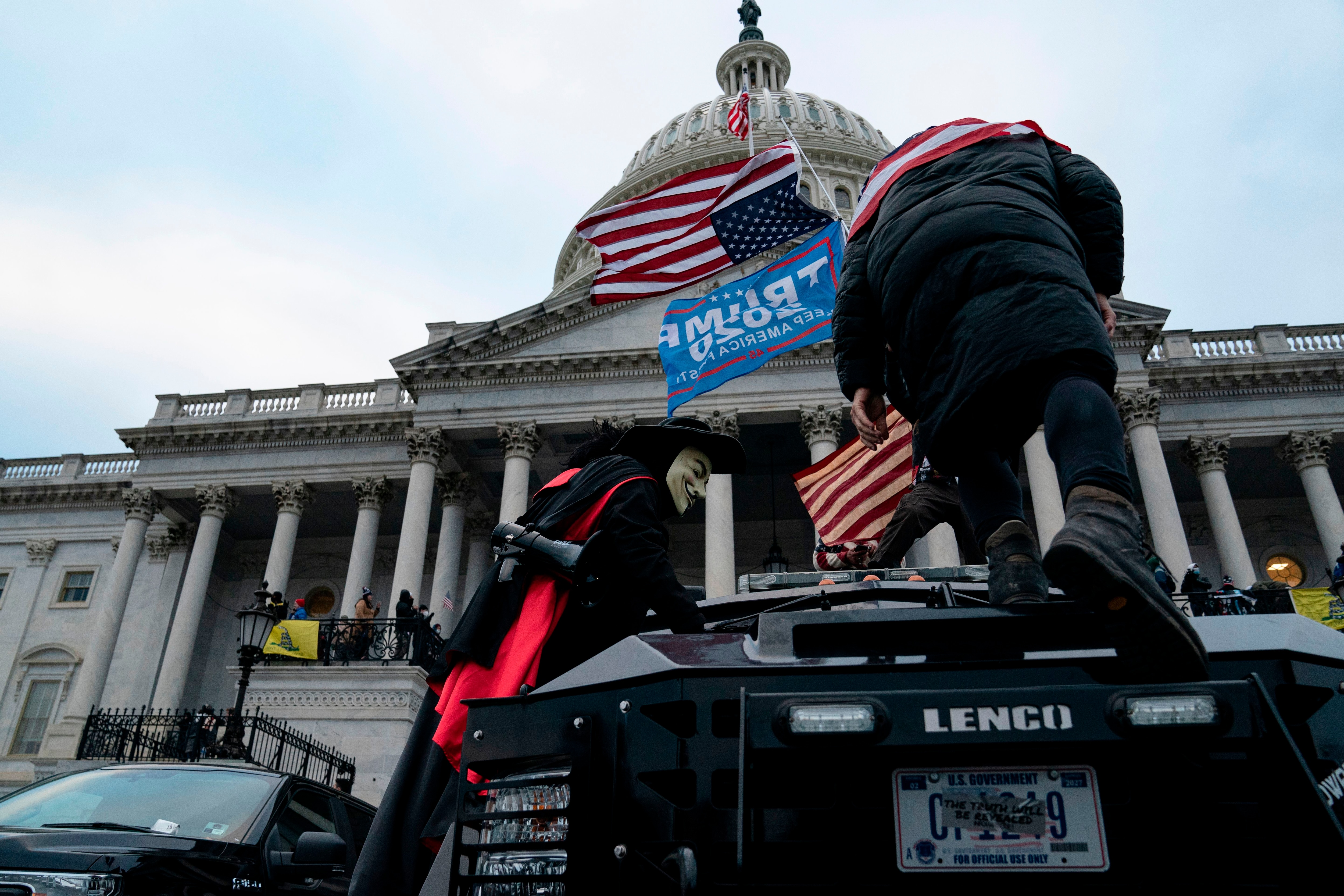 An upside-down American flag, a symbol for national distress, is flown outside the US Capitol during the riots.
AFP

The report offers the most devastating account to date of the lapses and miscalculations around the most violent attack on the Capitol in two centuries.

Three days before the siege, a Capitol Police intelligence assessment warned of violence from supporters of President Donald Trump who believed his false claims that the election had been stolen. Some had even posted a map of the Capitol complex’s tunnel system on pro-Trump message boards.

“Unlike previous post-election protests, the targets of the pro-Trump supporters are not necessarily the counterprotesters as they were previously, but rather Congress itself is the target on the 6th,” the threat assessment said, according to the inspector general’s report.

“Stop the Steal’s propensity to attract white supremacists, militia members, and others who actively promote violence may lead to a significantly dangerous situation for law enforcement and the general public alike.”

But on 5 January, the agency wrote in a plan for the protest that there were “no specific known threats related to the joint session of Congress". And, the former chief of the Capitol Police has testified that the force had determined that the likelihood of violence was “improbable". Mr Bolton concluded such intelligence breakdowns stemmed from dysfunction within the agency and called for “guidance that clearly documents channels for efficiently and effectively disseminating intelligence information to all of its personnel".

That failure conspired with other lapses inside the Capitol Police force to create a dangerous situation on 6 January, according to his account. The agency’s Civil Disturbance Unit, which specialises in handling large groups of protesters, was not allowed to use some of its most powerful tools and techniques against the crowd, on the orders of supervisors.

“Heavier, less-lethal weapons,” including stun grenades, “were not used that day because of orders from leadership,” Mr Bolton wrote. Officials on duty on 6 January told him that such equipment could have helped the force to “push back the rioters". Richard Barnett sits inside the office of US Speaker of the House Nancy Pelosi during a riot at the US Capitol in Washington, DC, on 6 January.
AFP

Mr Bolton’s findings are scheduled to be discussed on Thursday afternoon, when he is scheduled to testify before the House Administration Committee. He has issued two investigative reports - both classified as “law enforcement sensitive” and not publicly released - about the agency’s shortcomings on 6 January. He is also planning a third report.

CNN first reported on a summary of the latest findings.

The report, titled, “Review of the Events Surrounding the 6 January, 2021, Takeover of the US Capitol,” reserves some of its harshest criticism for the management of the agency’s Civil Disturbance Unit, which exists to prevent tragedies like 6 January.

Instead, nearly 140 officers were injured, and one, Officer Brian D Sicknick, later collapsed and died after being assaulted by rioters.

The Civil Disturbance Unit, Mr Bolton wrote, was “operating at a decreased level of readiness as a result of a lack of standards for equipment". In particular, Mr Bolton focused in on an embarrassing lack of functional shields for Capitol Police officers during the riot. Some of the shields that officers were equipped with during the riot “shattered upon impact” because they had been improperly stored in a trailer that was not climate-controlled, Mr Bolton found. Others could not be used by the police in desperate need of protection because they were locked on a bus in the middle of the siege.

“When the crowd became unruly, the CDU platoon attempted to access the bus to distribute the shields but were unable because the door was locked,” the report said, using an abbreviation for the Civil Disturbance Unit. The platoon “was consequently required to respond to the crowd without the protection of their riot shields.”

Since the 6 January attack, Congress has undertaken a series of security reviews about what went wrong.

The three top security officials in charge on that day resigned in disgrace, and they have since deflected responsibility for the intelligence failures, blaming other agencies, each other and at one point even a subordinate for the breakdowns that allowed hundreds of Trump supporters to storm the Capitol.

“None of the intelligence we received predicted what actually occurred,” the former Capitol Police chief, Steven A Sund, testified in February before the Senate. “These criminals came prepared for war.” 'We did not do enough': US Capitol Police chief apologises for riot security failure

But the inspector general report makes clear that the agency had received some warnings about how Mr Trump’s extremist supporters were growing increasingly desperate as he promoted lies about election theft.

“Supporters of the current president see 6 January, 2021, as the last opportunity to overturn the results of the presidential election,” said the assessment three days before the riot. “This sense of desperation and disappointment may lead to more of an incentive to become violent.”

The Department of Homeland Security warned the Capitol Police on 21 December of comments on a pro-Trump website promoting attacks on members of Congress with a map of the tunnel system, according to the inspector general’s findings.

Among the comments reported to the Capitol Police: “Bring guns. It’s now or never,” and, “We can’t give them a choice. Overwhelming armed numbers is our only chance.”

On 5 January, the FBI’s Norfolk field office, in Virginia, relayed another threat from an anonymous social media thread that warned of a looming war at the Capitol.

“Be ready to fight. Congress needs to hear glass breaking, doors being kicked in, and blood from their BLM and Pantifa slave soldiers being spilled,” the message read.

“Get violent … stop calling this a march, or rally, or a protest. Go there ready for war. We get our President or we die. NOTHING else will achieve this goal.”