A Victorian police officer filmed appearing to kick a man in the head during an arrest has been suspended amid an internal investigation into the incident. 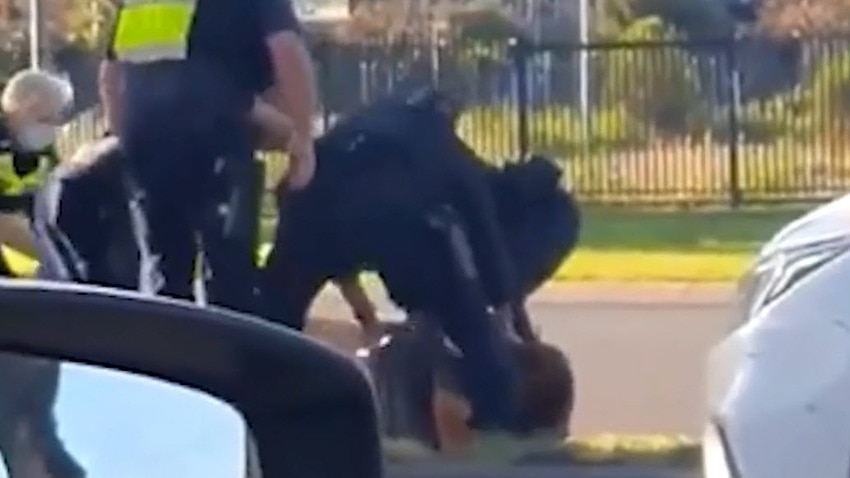 Victoria Police are investigating an incident in which an officer appears to stomp on a man's head. Source: Supplied

A Victorian police officer filmed appearing to kick a man in the head during an arrest in Melbourne has been suspended and the incident will be investigated by the state's anti-corruption body.

The senior constable was suspended after footage shared on social media showed him appearing to kick the man's head while he was on the ground at Epping on Sunday.

Video also showed a police car hitting the man as he walked in front of it before being arrested.

The 32-year-old has bipolar disorder and is in an induced coma following the incident.

His father, Glenn Atkins, has called for the officer who kicked his son's head to be sacked.

He said his son had gone to the Northern Hospital for treatment before running outside to meet a work colleague, which prompted hospital staff to call the police.

Deputy Commissioner Neil Paterson on Tuesday said he'd seen footage of the incident and formed the view that "it's an inappropriate use of force by a police member with regard to the kick, or the stomp, to the head of the man involved in that incident".

"I've also formed the view that the use of force in using a police vehicle with the man involved in that incident is concerning," he said.

The driver has had their authority to drive a police vehicle withdrawn, he said.

Dept. Comm. Paterson said the arrested man was waiting for treatment at Northern Hospital when he allegedly broke some glass doors exiting the facility and police were called.

"It was a very dynamic situation with the man running amongst traffic, kicking a police vehicle, at one stage he hops on the bonnet of a police vehicle, and then we see the police vehicle hit the man and then members tackle the man to the ground," he said.
Victoria Police's internal ethics body is investigating the incident, as is the state's Independent Broad-based Anti-Corruption Commission (IBAC).

"The community is rightfully concerned if someone is injured during an interaction with police," IBAC Commissioner Robert Redlich said in a statement.

"Given the potentially serious nature of this incident, IBAC has determined it is in the public interest to independently investigate this matter."

The force initially said the 32-year-old, of no fixed address, had been aggressive and had damaged a police vehicle as he attempted to avoid arrest.

In a second statement on Tuesday, it said the senior constable from the Critical Incident Response Team had been suspended the previous evening.