Fomer Holland, Ajax and Barcelona great Johan Cruyff has died at the age of 68. Here's a look at some of his most memorable moments and career highlights. 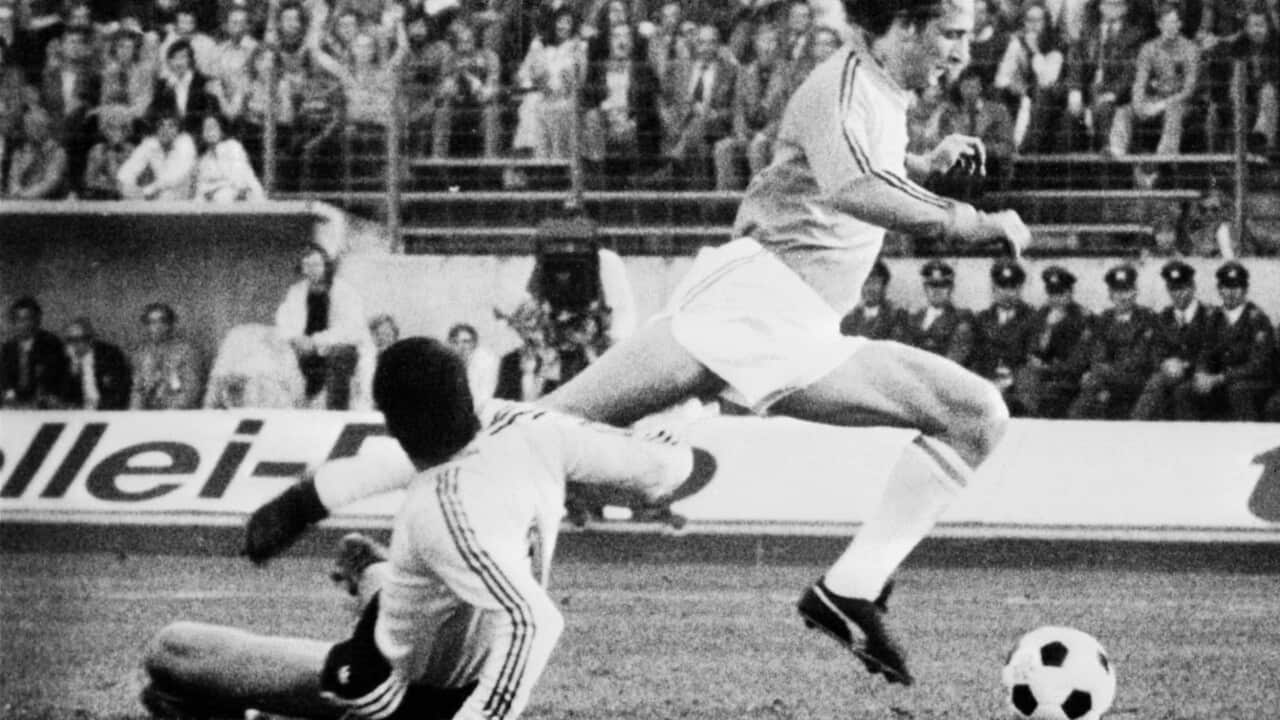 READ MORE
A tribute to a true great of the game: Johan Cruyff

Advertisement
One of the great moments in world football, this was a snapshot of individual brilliance which was immediately named after its creator.

RIP Johan CruyffThat turn. RIP Johan Cruyff - a pioneer of so much that made football great. Posted by SBS The World Game on Thursday, March 24, 2016

Cruyff's bamboozling of Sweden's Jan Olsson with a quick change of direction, leaving the defender on his backside, was the defining image of the 1974 World Cup, where Holland's 'total football' approach captivated the globe and took them to the final only to lose to West Germany.

Cruyff was player of the tournament and won the penalty just a minute into the final before Germany had even had chance to touch the ball.

Cruyff scored 48 goals for Barcelona but few are remembered as fondly as the one also dubbed 'Cruyff's impossible goal'. In a game against Atletico Madrid the Dutchman leapt into the air outside the far post, diverting a cross past goalkeeper Miguel Reina with the outside of his right heel at chest height.

Cruyff returned to childhood club Ajax in 1980, achieving what few players are able to do in scoring a memorable penalty. In 1982 in a match against Helmond Sport Cruyff opted not to shoot but instead tap the spot-kick sideways to team-mate Jesper Olsen, who knocked the ball back for Cruyff to turn it into the net with goalkeeper Otto Versfeld totally confused.

Lionel Messi and Luis Suarez recreated the same penalty in Barcelona's 6-1 win over Celta Vigo in February and afterwards Cruyff said: "What Messi did thrilled me. If anyone can get away with that, it's him."

The Dutch federation (KNVB) had a deal with adidas to supply the national team kit for the 1974 World Cup in Germany. However, Cruyff had a personal sponsorship deal with sportswear rivals Puma and made it clear to the KNVB he was unwilling to wear adidas' trademark three stripes.

Cruyff insisted on having a two-striped version instead and such was his importance and influence to the Dutch, his request was granted.

Cruyff made his debut for the Amsterdam side he joined as a 10-year-old and in his second season (1965-66) he scored 25 goals in 23 games as Ajax won the first of six league championships in eight seasons. He also guided the club to three successive European Cups from 1971 to 1973, their first European trophies.

Cruyff returned in 1980 to guide the club to two more league titles and following his retirement as a player he followed his mentor Rinus Michels in becoming manager but won only two Dutch Cups and the European Cup Winners' Cup, although his attacking football was more than evident as they lost the 1985-1986 title to PSV despite having a goal difference of +85.

Arriving as a then world-record transfer of $2.7 million in the summer of 1973, Cruyff helped the club win La Liga for the first time since 1960, including an inspirational performance in a 5-0 win over Real Madrid at the Bernabeu.

In contrast to the rest of his career, he had more of an influence as a manager as he won the league title four times between 1991 and 1994, won the 1989 European Cup Winners' Cup final before guiding the club to their first European Cup in 1992 at Wembley.

His legacy was much longer-lasting, however, as the brand of football he played became ingrained at the club - as a player Pep Guardiola learned much from him which he then translated into his own coaching style - and those qualities still remain today.