Australia defender Rhys Williams is in discussions with promotion-chasing English League One side Bradford City over a loan deal for the rest of the season, with a stint in the A-League beckoning beyond that. 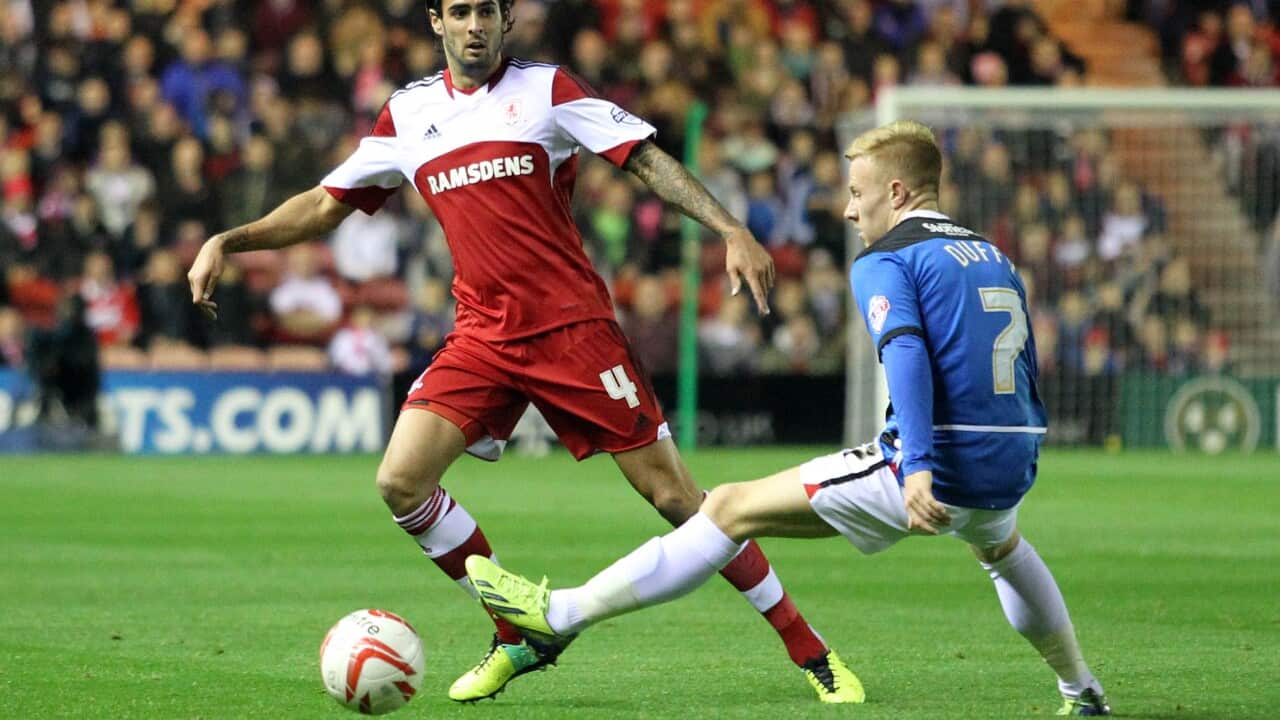 The Middlesbrough utility, fit and hungry for game time after putting two years of injury hell behind him, has been in dialogue with Bantams coach Phil Parkinson since returning from a four-game loan sell at Charlton Athletic.

Advertisement
If the move goes ahead, Williams, 27, would link up with fellow Socceroos defender James Meredith - City’s left-back - and add his weight to the sixth-placed Yorkshire club's bid to cement a play-off spot with 12 regular season games remaining.

Williams is resigned to leaving Boro, who lie second in the Championship, when his contract expires at the end of the season after 11 years at the Riverside Stadium.

And a stint with Bradford could be a springboard for a move back to Australia where a bevy of clubs have expressed interest in the 14-cap Australia defender, with hometown team Perth Glory among the front-runners to snare him.

“I’ve met the manager at Bradford and they are keen to do something straight anyway … they are a big club that’s doing well and chasing promotion,” Williams said.

“It’s a strong possibility. They wanted to do something before I went back home the other week (to attend his grandfather’s funeral in Perth) and it’s looking quite likely it may happen.

“For me, the main thing now is to get games under my belt and proving my fitness. I want to keep the recent run of games going – and what better place to do that than a team challenging to get back in the Championship.

“I know a few of the boys there, including the fitness coach who was at Middlesbrough a few years back. They have a big following and it could be a great shout for me.

“It feels like the right thing to do, but we’ll just have to see what happens in the next couple of days. They are on a good run if wins and if I go there I want to be a part of things and not just make up the numbers.

“I feel great ... right now it’s about people not so much taking a gamble on me, but just showing a bit of faith in me.

“I have been out for so long, people think I can’t get back to where I was. But I feel different about it. Football, though, is a game of opinions and it’s hard to change opinions."

Beyond the remainder of this season, Williams, who has also made five reserve team appearances for Boro of late, said it would take “something drastic” to derail his plans to sample the A-League, where he believes he can make a fresh start and put some of the baggage of being labelled 'injury prone' behind him.

“I need games under my belt to get back to where I know I can be and that's part of the reason why I am going to come home,” he said.

“I have even started looking at properties back in Australia and it’s something I am really interested in, should the deal be right. It will take a lot to change my mind.

“I know the managers in Australia believe in what I can do, and believe they can get me back to where I need to be. I need to play well for a manager who will give me the time to get back in the national team reckoning as well.”

There’s a sentimental link with Perth Glory, whose coach Kenny Lowe arranged for Williams to go on trial at Middlesbrough as a 15 year-old during their time together at talent-factory ECU Joondalup.

“It’s my hometown club and Kenny is a family friend anyway,” Williams said. “We've been talking about this (the possibility of Williams joining Glory) for about a year.

“Maybe it could be about me repaying the faith that he showed in me. You never know.

“Perth are a team on the up, you only have to look at their recent record. It’s something I’d like to be a part of, especially if they carry this on into next season.

“But then again you have the sides in the Eastern States who we are also taking to. I will just weigh up my options at the end of the season.

“The Asian champions League is something I would like to play in and if someone was interested and in the ACL, then I’d maybe lean towards that a little bit.

“Time will tell … there’s really nothing concrete just yet, and until there is, it’s just really all talk."

But Williams is not about to close the door on a return to Europe, or even a stint Asia down the track.

“China is getting really exciting, as is elsewhere in Asia, and I would never rule out Europe again also,” he said. “If I go home and do well and enjoy it I might just stay. But, right now, it’s just one step at a time.”