There are a host of stars who could be playing their last A-League game for their club this weekend as the elimination finals kick off. The World Game looks at those who are definitely on the way out and others whose futures remain uncertain. 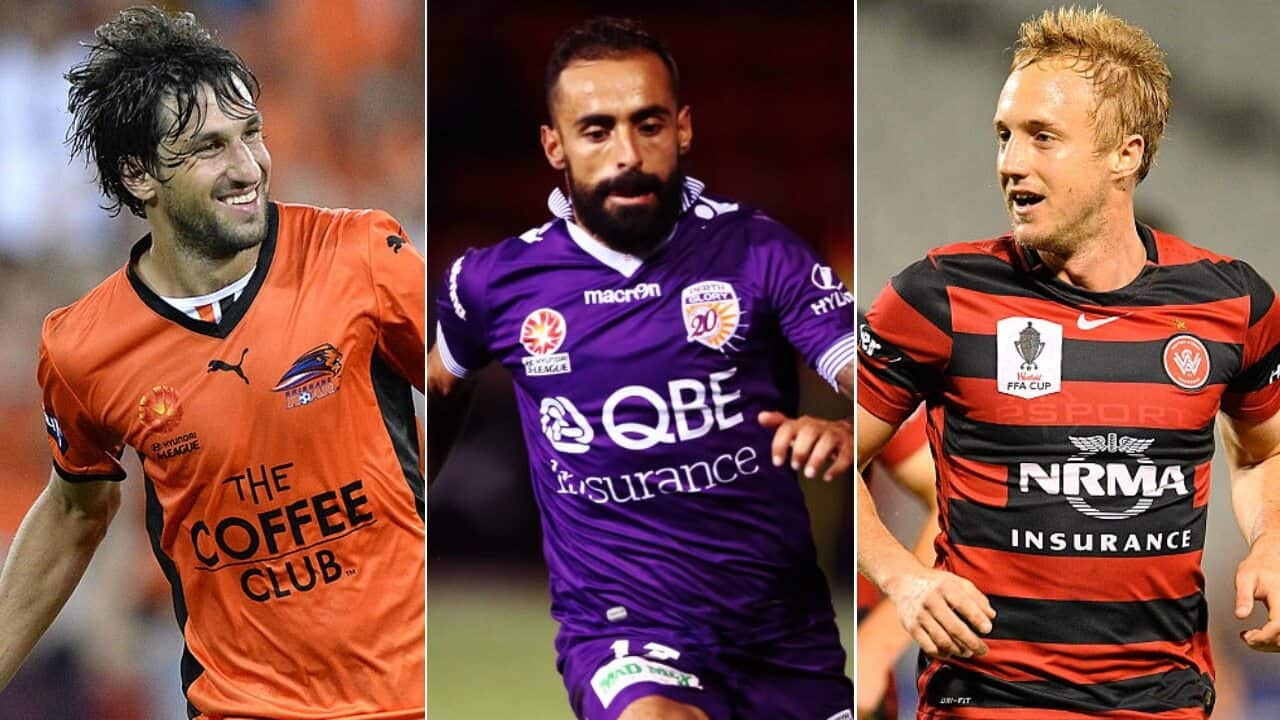 It can be a difficult time emotionally for a player who knows his next game for his club could also be his last. It can be a tricky scenario for clubs to manage, as well. Just ask Thomas Broich and Brisbane Roar.

Broich, the two-time Johnny Warren Medal winner and huge fan favourite, this week chose to announce himself that he wouldn't be at Brisbane next year because the club wasn't sure if it could even offer him a new deal.

The revelation forced the Roar into damage control ahead of Friday night's game against Western Sydney Wanderers at Suncorp Stadium.

Advertisement
It also remains unclear whether playmakers Luke Brattan (Melbourne City) and Diego Castro (Perth Glory), whose teams will clash at AAMI Park on Sunday, will remain with their clubs next season, and the same goes for Wanderers midfielder Mitch Nichols.

The Roar were caught short by Broich's announcement just days before a knockout finals game. The club's football director, Craig Moore, said he understood where the player was coming from, but was disappointed he chose such a time to go public. Coach John Aloisi blamed the salary cap.
Jamie Maclaren also won't be at the Roar next season. He will sit down to consider overseas offers as soon as the team's commitments for this season are over.
Veteran goalkeeper Michael Theo, a winner of five championships (three with Roar and two with Melbourne Victory) remains uncontracted for next season at this stage. He has been duelling with Jamie Young for the goalkeeping spot. Young is contracted for next season.
Veteran winger Manuel Arana is another who is playing for a new contract. Young gun Joe Caletti, who has broken through strongly this season, is in negotiations on a new deal with the club.

Nichols remains keen to try to get a contract in Europe before it is too late in his career, but by delaying talks with his existing club he is taking the risk that there may not be a contract for him there in the end - or not for the terms that might have previously been available to him.

Western Sydney have got to get on with business and they have already been busy in the midfield area, with Roly Bonevacia set to join them from Wellington Phoenix.

There remains uncertainty about whether Nicolas Martinez and Terry Antonis, who are both on loan deals, will be at the club again next season, while 34-year-old captain Dimas Delgado could be on the way out.
It will be the end of an area if Shannon Cole, the last of the players from the original Wanderers squad to be still be at the club, doesn't get a new deal. He is among those players on whom decisions will be made after the season has ended. Bruno Pinatares is unlikely to be re-signed.

Brattan is another who wants to have a crack at Europe. His loan deal from Manchester City is coming to an end, but he remains contracted to the Premier League club beyond this season. Anthony Caceres is in the same boat.
In a recent interview, Brattan said "I could be anywhere next year". Caceres said he could only guess what would happen after this season. City will be relying on them to forget about all of that for the time being and produce the performances the club needs from them in the finals.
The versatile Nicolas Colazo, another loanee and one of the club's marquee men, is tipped to not remain at the club.
Veteran goalkeeper Thomas Sorensen remains unsigned and may be headed for retirement, while 35-year-old defender Josh Rose is walking the tightrope. He joined City on a one-year deal from Central Coast Mariners and could be looking at the end of his A-League career.

Many of their players are playing for new contracts and in some cases would boost their chances of being re-signed with big performances in the finals.
Among those the club will make decisions on at season's end are Dino Djulbic, Nebjosa Marinkovic, Liam Reddy and Marc Warren.
The player the Glory would have loved to have re-signed by now, 34-year-old Diego Castro, will keep them waiting into the off-season while he decides whether to continue playing for another year.
Josh Risdon is headed for the Wanderers and Rhys Williams almost certainly to Melbourne Victory. There has obviously got to be some serious rebuilding done when a team concedes 53 goals in 27 regular-season games.