Mercurial Socceroos midfielder Tom Rogic showed he is well on the way back to his best football with an impressive showing in Celtic's 2-0 win against Aberdeen. 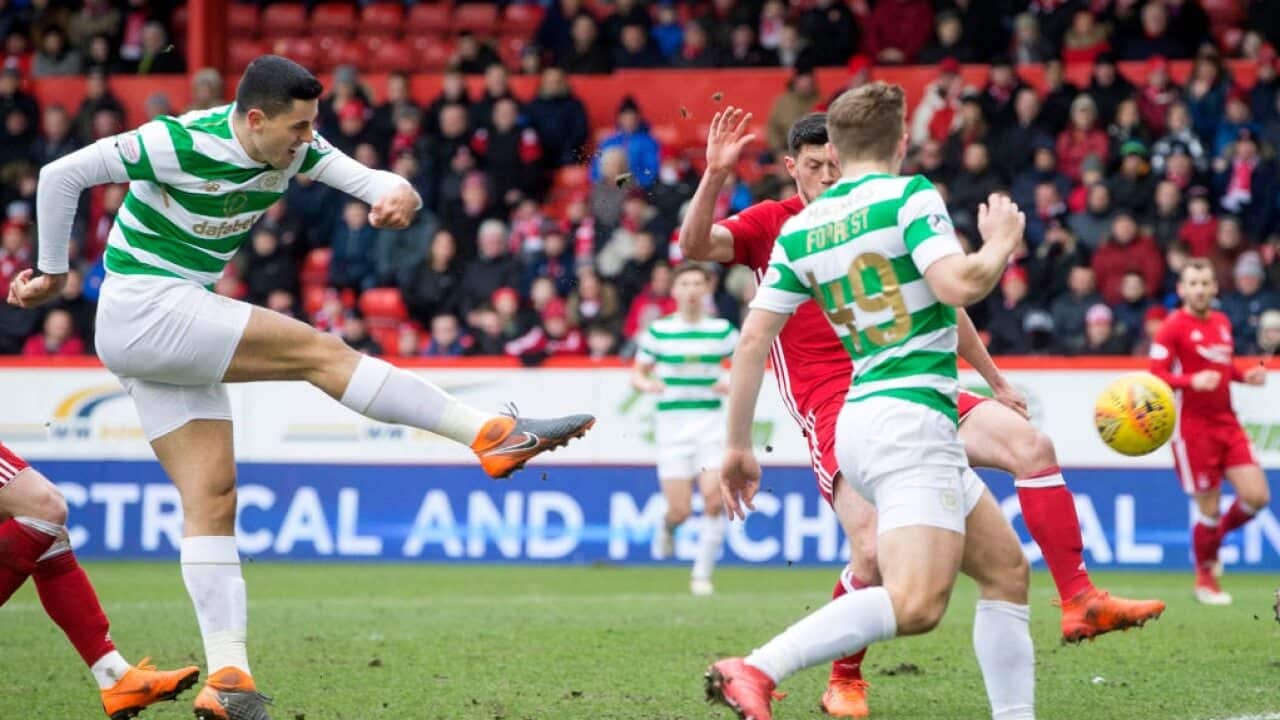 Rogic, playing in only his third game back since a two month layoff due to a knee injury, was a constant attacking threat in the first half creating a number of chances before being substituted in the 72nd minute.

The 25-year-old was denied by Aberdeen shot stopper Freddie Woodman after 19 minutes after breaking free of his defender insider the penalty area.

Advertisement
10 minutes later, Rogic was again unlucky not to have scored when Woodman raced out of his box to block Rogic's header on the edge of the penalty area after recieving a long ball over the top of the Aberdeen defence.

Celtic finally found themselves in the lead when  Moussa Demebele headed home in the 37th minute after a sublime cross from James Forrest to the back post.

The reigining Scottish champions dug in during the second half but were reduced to 10-men in the 76th minute when Swedish defender Mikael Lustig was given his marching orders after a recieving a second yellow card for a crude challenge on Gary Mackay-Stevens.

However, Brendan Rogers side refused to take a backwards step and young left back Kieran Tierney struck in the 83rd minute after a rapid counter attack to wrap up the result.

Celtic have now stretched their lead at the top of the Scottish Premier League to nine points ahead of second placed Rangers.

It was a different story for Rogic's Socceroos teammate Bailey Wright and his Bristol City side who suffered a 1-0 loss to Cardiff City.

Wright, who captained the side, played 90 minutes at right back for Bristol as they battled it out with second placed Cardiff before the Bluebirds found a winner courtesy of Kenneth Zohore in the 82nd minute.

It was a tough result for Bristol who sit just inside the playoff spots in England's Championship with potential Premier League promotion on the line.

Despite remaining in sixth spot on 52 points, the gap to fifth has widened after Fulham upset league leaders Wolverhampton while seventh-placed Middlesbrough and the rest of the chasing pack continue to edge closer.

Bristol City have a chance to return to the winners circle on Sunday (AEST) when they host 17th-placed Sheffield Wednesday.

Wright wasn't the only Australian player to be on the wrong end of a losing scoreline with Feyenoord's goalkeeper Brad Jones struggling during his side's 3-1 loss to Eredivisie league leaders PSV Eindhoven.

Despite a recent run of form, Jones had no answers for a rampant PSV attack as they dominated proceedings and never looked like losing.

Jones, who is tipped to break his Socceroos exile with selection in Bert van Marwijk's first squad ahead of matches against Denmark and Colombia, will be determined to return to form when Feyenoord travel to NAC Breda on Sunday morning (AEDT).

In Germany, Robbie Kruse played 90 minutes for 2. Bundesliga outfit VFL Bochum as they played out a 0-0 draw with Nurnberg.