A cat-and-mouse stalemate, some hard words and a sprint relegation were all packed into the final kilometres as George Bennett (Jumbo-Visma) and Gianluca Brambilla (Trek-Segafredo) fought it for the consolation places on Stage 12 of the Giro d'Italia. 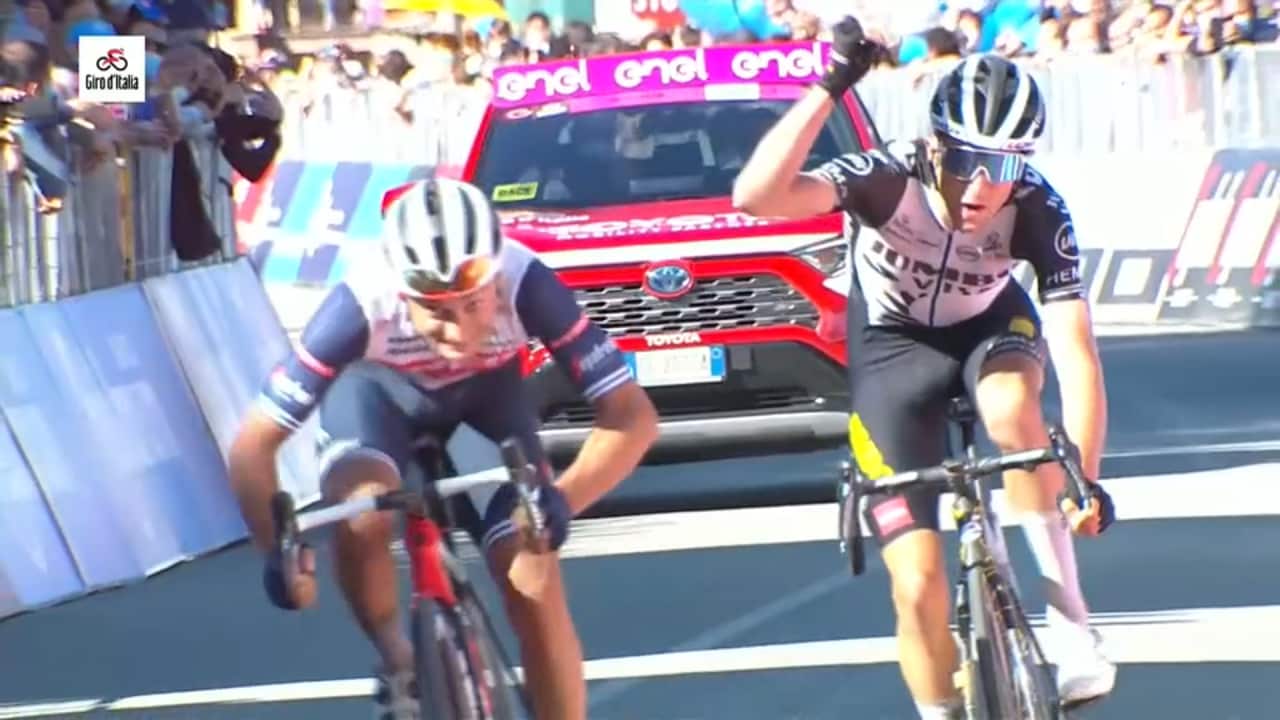 George Bennett gestures in protest as Gianluca Brambilla sprints ahead of him on Stage 12 of the 2021 Giro d'Italia. Source: SBS

Brambilla crossed the line in third place on Stage 12 of the Giro d'Italia in Bagno di Romagna, but the Italian was soon relegated to fourth place behind Bennett after he moved off his line in the sprint for third.

The pair were part of the front of the race after making the late escape on the final climb of the day from the early breakaway but managed to back their way out of a winning position with some bizarre tactics.

Brambilla was hanging behind with three kilometres to go, threatening to launch an attack with a sustained run at the slipstream of another rider. Bennett then dropped back towards Brambilla, but left too much of a gap to the pair of Chris Hamilton (Team DSM) and Andrea Vendrame (AG2R-Citroen). Hamilton put in a surge to move clear with Vendrame following leaving Bennett and Brambilla with a big gap to close behind.

Brambilla tried to launch across but with Bennett on his wheel, he wasn't keen to commit wholesale and Bennett offered little to no help. The pair exchanged words on the run-in to the finish as they chased behind the two leaders, with Brambilla closing the stage by sprinting across the road and cutting off Bennett, who swung up an arm of protest at the finish.

"I have nothing to say," Brambilla said immediately after the finish, before his relegation was decided. "Just ask George Bennett how to lose the race. Sometimes it's better to watch some racing on TV so you can learn how to do it."

Bennett defended his tactics, saying that he was taking tactical risks as he tried to take the victory.

"I'm not going to win the sprint, so I have to gamble," Bennett explained. "If I was a fast guy, I would have ridden that differently, I'd try and cover everything. But if you're 58 kilos and struggle to break 1,000 Watts then what's the point of keeping it together?"

"Today was an opportunity, and like I said we gambled for the win. We're not here to close everything and end up third or fourth in the sprint."

Bennett had come to the Giro with the hope of a good run on the general classification but a series of disappointing showings in the opening week have meant that his goals for the race have had to shift.

"Stage hunting in breakaways is not normally what I do, and maybe it takes a while to get the feel of that a little bit," said Bennett. "I think the next stages as we head into the big mountains, it's more about legs than playing the game, tactics, cat and mouse, so hopefully that's a bit more for me."