Vendrame beats out Hamilton as breakaway fights out Giro Stage 12

It was a fight that came down to the final run to the line at the end of the 212 kilometre stage in Bagno de Romagna, with Andrea Vendrame (AG2R-Citroen) outsprinting Australian Chris Hamilton (Team DSM) for the win. 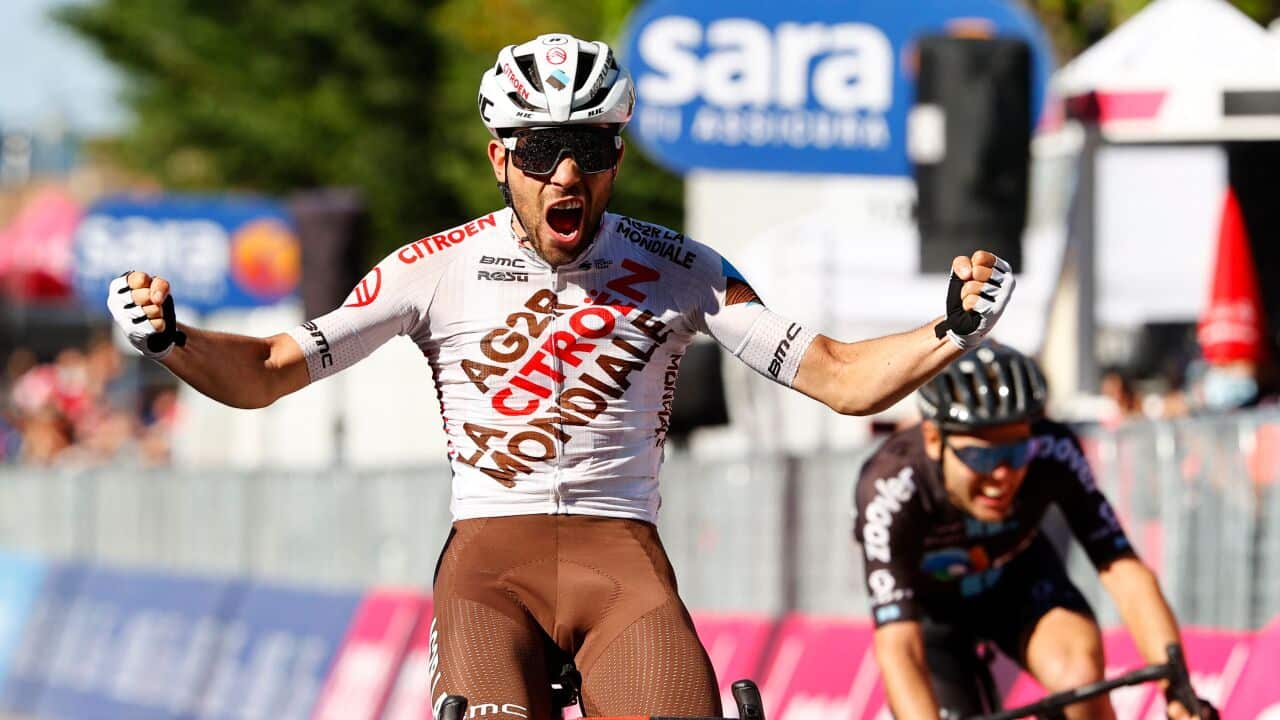 Andrea Vendrame celebrates as he crosses the finish line to win Stage 12 of the Giro d'Italia 2021 Source: Getty

Andrea Vendrame put a series of close misses and disappointments at the Giro d'Italia by taking the win in Bagno di Romagna after riding aggressively from the breakaway on Stage 12 of the Giro d’Italia.

Vendrame was the first to attack from the break over the top of the final climb and then followed Hamilton in the finale as well, jumping clear from a group of four in the final kilometres before beating the Australian in a two-rider sprint.

"I'm super happy because I tried in 2019 but I was second and Chavez won that day, and I tried also last year but I was in a bad position,” said Vendrame. “I have been training hard this year and I made a dream come true. I'm really happy. We've been working to try to get the blue jersey for Bouchard and then in the finish we made it so I could try and get the victory.”

Gianluca Brambilla (Trek-Segafredo) beat George Bennett (Jumbo-Visma) on the line for third place, some 15 seconds down on Vendrame, after the pair missed the late attack and then looked at each other to chase. Brambilla was relegated for changing his line in the sprint, elevating Bennett to third on the day.

It was a hard fought contest on the longest day in the saddle so far this Giro d'Italia, everyone knew the breakaway stood a very good chance and there was a massive fight for the first 70 kilometres of racing to establish the early move.

Bouchard was assisted by Vendrame to extend his lead in the King of the Mountains blue jersey and now has a strong hold on the classification with Egan Bernal the nearest competitor at 48 points, half of Bouchard's 96 point total.

Vendrame was the first to get clear on the final climb of the stage, the Passo del Camano, and drew out Hamilton, Bennett and Brambilla. Each of the quartet had eyes for the stage win, and it was a cagey run to the finish with attacks watched and countered. Within three kilometres to go, the tactical games reached their peak as Brambilla and Bennett backed themselves off the other two, with Hamilton putting in a surge to make sure of the gap, taking Vendrame with him.

There was then a distinct lack of willingness to work between Bennett and Brambilla, which saw the front two riders given a free run at the sprint. Vendrame proved significantly faster than the Australian, taking his first Grand Tour stage win.

Back in the peloton, it was a mostly sedate day, but there was a late injection of pace over the top of the final climb as Vincenzo Nibali tried a Trek-Segafredo attack with Giulio Ciccone. The pair were essentially neutralised, but the veteran Sicilian pressed on alone on the descent, displaying his formidable technical skills. Gianni Moscon (INEOS Grenadiers) tried to chase the former two-time Giro winner back but crashed on a sharp corner on the descent. Nibali battled on, but his reward was just seven seconds on the general classification over the peloton, reducing his deficit to Bernal from four minutes and 11 seconds to four minutes and four seconds.