The A-League fans groups whose boycotts have rocked the competition to its core will call off any further protests if Football Federation Australia CEO David Gallop meets their demands in a critical meeting in Sydney on Wednesday evening. 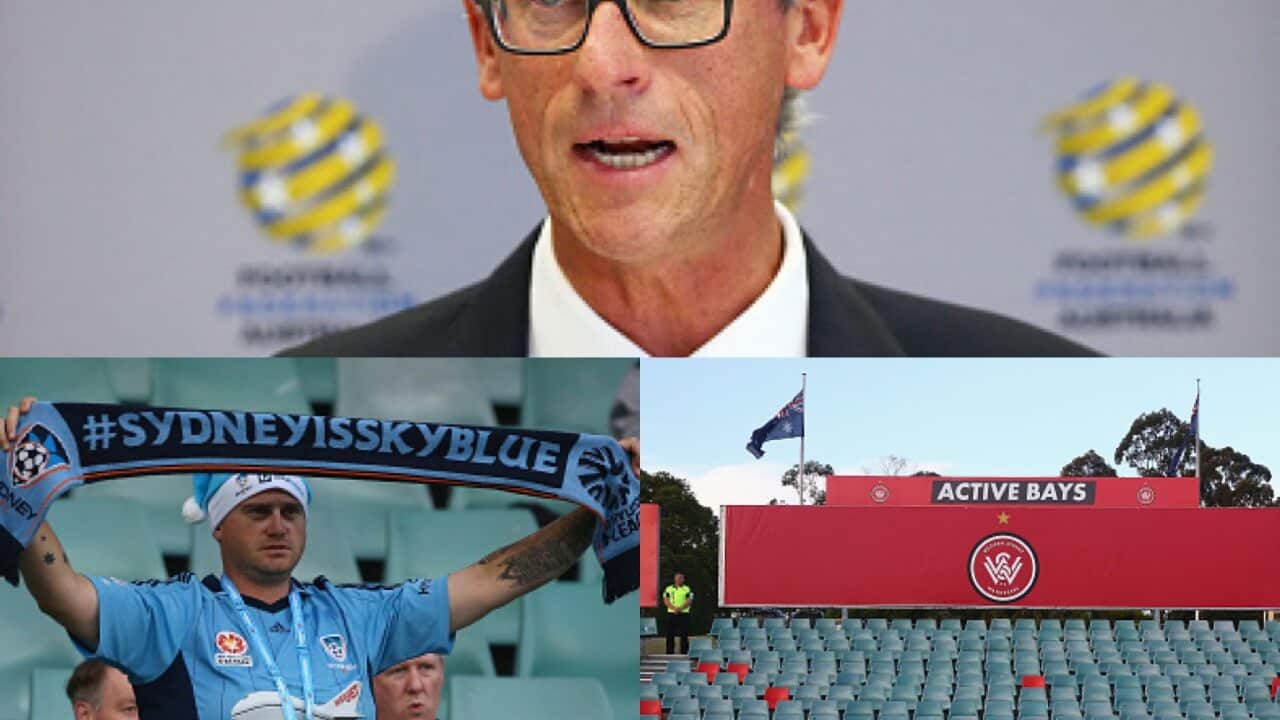 Fans stayed away in their droves during Round 9 matches in the A-League Source: Getty Images

Gallop’s crisis talks with delegations from all 10 active fans groups offers the governing body a way out of a mess many believe is of their own making, so long as it agrees to institute a "fair and transparent" appeals process to supporters serving stadium bans for a number of infractions.

Advertisement
Gallop will also be asked to divulge evidence compiled against the 198 fans that were named in a leaked list published by News Corp Australia two weeks ago.

If that is not legally possible, he will be asked to detail to the fans’ satisfaction of why not.

The FFA, whose meek reaction to the Sunday Telegraph article set-out to smear the code and incense supporters across the competition, is now scrambling to avoid the damaging spectre of another weekend of empty seats and stadiums devoid of atmosphere.

Fans, who feel undervalued and unappreciated by the governing body which uses them to spruik the game in advertising campaigns, have the upper hand in a dispute Whitlam Square has little option but to resolve.

Tribes from across the league have united over the issue of the imposition of an immediate appeals process, as opposed to the pledge from FFA to look at the matter again at its next board meeting in February.

Spokesman Grant Muir, from the Sydney FC group The Cove, said fans will enter a meeting scheduled just hours after summit between FFA and the A-League owners determined to solve the impasse, but unwilling to buckle on their key demands.

“We will be there to solve the problem and find ways to stop the protests,” Muir said.

“But the balls are in the FFA’s court. I am personally hopeful that enough will be agreed upon that we can go back to what we do best: supporting football.

“There’s an opportunity here, and I am happy that every fan group has come to together with the same mind-set.
“When we take that into the meeting, we will come out with what we’re after, so long as the FFA is genuine in their desire to address this issue.”

Muir said fans were not willing to compromise in the quest for an appeals process which incorporates “natural law requirements” and can be demonstrated to be open and not simply relying on evidence, some of which is believed to be of little more than hearsay value.

“The FFA have flagged that there may be legal reasons to the sharing of evidence (with supporters) and if that’s the case they need to properly articulate them," Muir said.

“There needs to be a demonstration of good faith on their behalf. We don't want to see them going on to change their minds at a later date.

“If it is legally possible for someone to see the evidence against them then they should. If not, then the FFA should stop using that evidence.

“The only time it would not be possible to use evidence is if the police are still deciding whether they are going to use it to prosecute somebody. Once that’s decided the person involved has access either way.

“If the evidence comes from any other source than the police, then there’s no legal basis for not showing it to us.”

That would include evidence provided by the surveillance group Hatimoto, who are employed by FFA to inform on unruly fan behaviour.

Muir believes it's in Hatimoto's interests to perpetuate and exaggerate incidents involving supporters.

The united fans front want action on appeals before February, Muir said: “There needs to be a sense of urgency on the process, and it should not simply based around when the next board meeting is.

“There can be an AGM, they can get a quorum. They can’t say they treating it with urgency and then not act accordingly, that’s not a show of good faith.”

While Muir was unwilling to pre-empt the outcome of the meeting, he made it clear fans would extend match boycotts if FFA does not “come to the table and play ball”.

“Nobody wants to be doing this, and it all depends on what is said and done and what our collective interpretation of that is," Muir said.

“As fans, these issues are more important than anything else to us, and they (FFA) would best take note of that.”