Sebastian Hassett takes a look at the final four and who is the best chance of lifting the trophy at the Stade de France on 11 July (AEST). 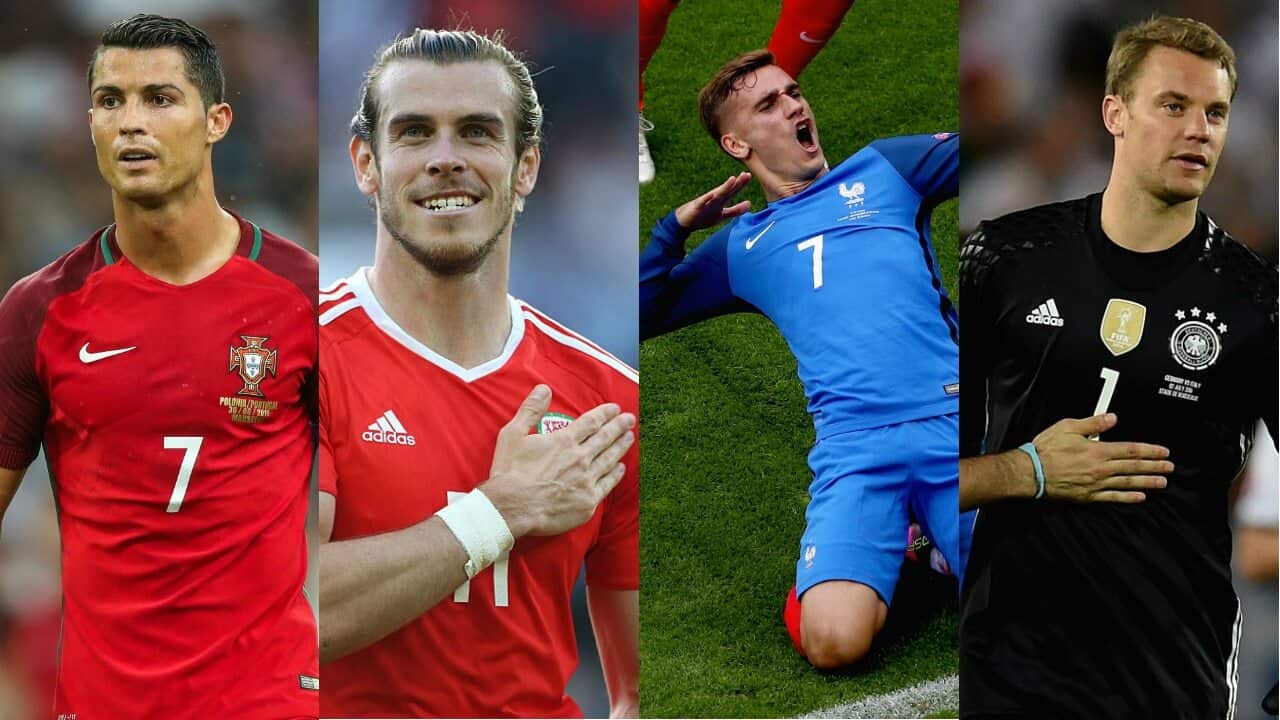 Winless in regular time in all five matches, and needing 117 minutes to see off Croatia, Portugal’s survival to the semi-finals can give hope to teams everywhere - you don’t need to set a tournament on fire to win it. But you do need be tough, and that’s what everyone seems to have has missed. This is a team prepared to do the hard work, even when the goals aren’t flying in.

Semi-final summary: The Euro 2004 defeat to Greece instilled a whirlpool of pessimism in the Portuguese national psyche - one that hasn’t been helped by a series of near misses. Yet it will be hard for the masses not to be thinking about the final, knowing they come up against a side that few saw getting out of the group stages. Wales are clearly a good side but there will be serious recriminations in Lisbon if they don't win in Lyon on Thursday morning (AET).

What gives hope: Resilience. They do seem to be getting better as the tournament goes on - and harder and harder to break down. Portugal have always produced physical, skillful defenders but now they look battle-hardened and capable of going the distance. Pepe, Jose Fonte and Cedric have been terrific, but Raphael Guerreiro - who missed the quarter-final - is a superior option to Eliseu at left-back. They need to get him back.

For the first time, it’s almost tempting to remove Ronaldo from this slot. Yet while he was terrible in the quarter-final win over Poland playing as a lone striker, he did absorb the attention of at least two and sometimes three defenders. The prime beneficiary is Nani and and the new star, 18-year old Renato Sanches, who has arrived at exactly the right time. Still, CR7 will be determined to ensure GB11 doesn’t steal his limelight.

Defying all expectations that Chris Coleman’s side would be back in Cardiff before the tournament even got into stride, they’re not only in the final four but thinking of getting into the decider. And from there, who knows? Regardless, it’s already been tournament for the ages, with a mighty cast of heroes. Hal Robson-Kanu’s Cruyff turn summed up an unbelievable month that will live forever.

Semi-final summary: Though Portugal will be thinking this is the dream opportunity to move through, don’t think Wales won’t be thinking the same - this is by far the best outcome for them. Nullifying Ronaldo has been proven possible by the defences of Croatia and Poland, and Ashley Williams has morphed into some kind of super hero this past month. Catching Portugal on the counter-attack, as they did against Poland, looks the right strategy.

What gives hope: Complete this pattern: Denmark, Greece, Leicester... Wales. Indeed, all the shock results of football in the modern era are being wheeled out as reasons why Wales can indeed go all the way. But more than that is how they played against Belgium - a stunning display of pacy, intelligent football, superb defending, relentless movement, combing direct football with neat interchanges.

Still a chance of being named player of the tournament, Bale’s status has been elevated even further in France and he remains the player most likely of breaking Portugal’s stodgy defence. In the absence of the suspended Aaron Ramsey - himself playing the best month of football he’s ever player - the onus is on Bale to rise even more.

Host nations invariably perform well at national tournaments and France are no exception here. No team has scored more goals in these European championships, which speaks volumes about the way they play their football: creative, aggressive, expansive. There’s been the occasional query on their defence, but without Raphaël Varane, they’ve held up as well as could be expected.

Semi-final summary: France have played better than Germany in patches, but Germany haven’t looked like losing any game they’ve played - whereas France flirted with disaster in games against Romania, Albania and Ireland. One suspects Germany are more balanced and patient but if France hit top gear, anything is possible. But can Blaise Matuidi, Paul Pogba and N’Golo Kante (suspended for the quarter-final) all play together?

What gives hope: Stretches of brilliant football - think the second half against Ireland and the first half against Iceland - indicate a team capable of sweeping all before them. Don’t underestimate the value of playing at home, either. French patriotism is at an all-time high - just see the countless flags in the stands - and they’re ready to roar this team home, as they did in 1998.

Dmitri Payet has been wonderful and Olivier Giroud is growing by the game but it's Griezmann whos threatens to end up as the player who reached the highest level of all. His chip against Iceland to take the lead in the Golden Boot was the stuff dreams are made of. He seems to relish the international stage, following on from an excellent World Cup two years ago. Under pressure, his finishing is exquisite.

The anti-story of the Euros, Germany have lived their stereotype - methodical, efficient, faultless - so well that some might think it as boring. They do whatever they need to do to win but not too much more, which is why the attention has been elsewhere. Still, the battering of Slovakia revealed their ruthless streak and were the only team Italy couldn’t get the better of.

Semi-final summary: The romantics will side with France but the punters will likely be keeping safe - and there’s no safer bet than Joachim Low’s side, one he knows like the back of his hand. Losing Mats Hummels to suspension and Mario Gomez to injury is a blow, but neither were in the starting XI for the first game. Others will sense their opportunity.

What gives hope: This scenario will have a huge sense of familiarity, having defeated France in a quarter-final in Brazil two years ago. They then played, and defeated, the host nation in a 7-1 romp - so none of what is unfolding before them holds any fears. Like no other team in world football, Germany are built for these moments.

At some point during the semi-final in Marseille, France will get on top of Germany and launch a repeat series of raids. When that happens, how Germany responds will probably determine the outcome. Neuer needs to keep the defence tight and ride out the storm. He stood so tall in the penalty shootout against Italy and re-affirmed his status as the goalkeeper in the world.