Former Argentina captain Javier Zanetti has hailed Marcelo Bielsa as “just the right person” to take the Socceroos to the 2018 World Cup in Russia. 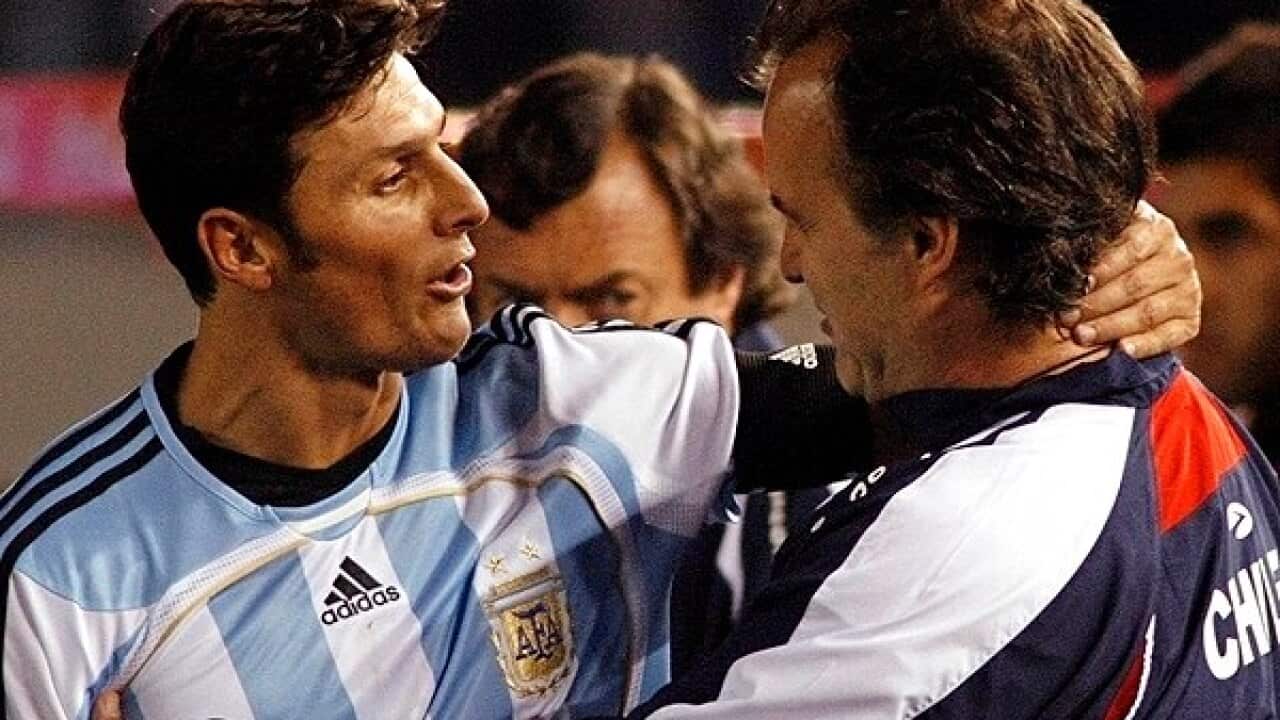 Speaking to The World Game, Zanetti – who spent six years with Bielsa between 1998 and 2004 when the latter was coaching the national team – said there was no better fit for a nation looking to shape its football ideology.

The 62-year old Bielsa is currently out of work following his departure from French club Lille, and leads a list of  legendary coaches the likes of Louis van Gaal, Luiz Felipe Scolari, Ralf Rangnick, Sven-Goran Erikkson and Roberto Mancini, who are all interested in replacing Ange Postecoglou.

And Zanetti, one of the game’s most decorated figures thanks to his 20-year career with Inter Milan and 17-year spell with the national team, has no doubt about Bielsa’s compatibility for the Socceroos.

“Bielsa would do a great job for the Australian team. He can put all his experience, knowledge and abilities to use for the good of the country,” Zanetti said.

“I think he would find the right way to work with such a team and be able to get the best out of them.”

Zanetti, currently Inter’s vice-president, acknowledged there was limited preparation time before the World Cup but that Australia should look to implement Bielsa’s template to construct a complete vision for the game.

“It is true that it is a short time (before Russia),” he said.

“But I think Australia would have to think not only about the World Cup but also about the long term. I think that’s the only way a really good job could be executed and for that Bielsa would be the just person.”

Zanetti said Australia's players would need to get used to a coach who was extremely detailed in his preparation but that it would ultimately benefit them, especially in regards to the opposition.

“Bielsa is a coach who is in all the details, he prepares with great dedication all the matches, what he trains with during the week is what afterwards one finds in the match,” he said.

“He knows perfectly all the rivals and the characteristics of its players, communicates very clearly and transmits great passion.”

Criticism has been levelled at Bielsa for some of his recent experiences at club level, although Zanetti believes there are justifications for why it didn’t work out each time.

“Sometimes it depends a lot on the moments in which the teams are in,” he said.

“At Marseille, I think that for a good period he did a great job – he was on par with the leading teams of that country. In Lazio it did not work out and in Lille he had little time to do an evaluation.”

Asked if the the “El Loco” nickname was a fair one, Zanetti said it was simply a reflection of the way Bielsa passionately lived his life – and that he imbued each player with a love of the game.

“When football is your passion, you live it in an intense way and he is a great professional,” Zanetti said.

“He always taught us about having an 'amateur' spirit that embraced those values of loyalty, respect and humility, added to a culture of work.

“He taught me a lot and he transmitted great football concepts, all of which helped me to grow professionally. Working with Bielsa was a great experience for me.”