A number of long acting servants of the game died in the space of 16 days in December and all should be honoured for their contribution to football and building it in our country. 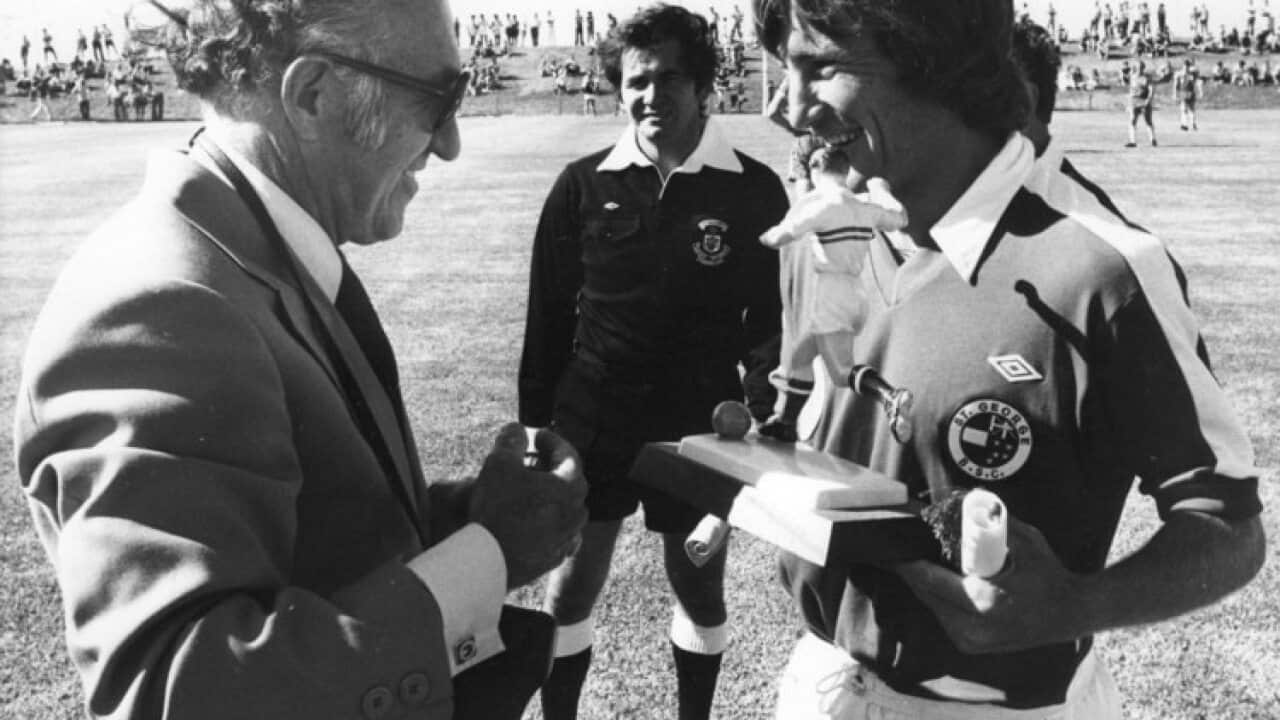 The festive season was not very jolly for us football old timers.

With a number of people who helped football develop in Australia passing away recently, all should be honoured for their efforts and passion for growing the game.

Dr Brian Corrigan AM, the Socceroos’ team doctor for 30 years, died on 9 December at age 87.

Advertisement
Les Bordacs, founder and long term president of St George Budapest SC, passed away peacefully in his sleep at age 98 on 13 December.

Richard Alagich, who dedicated his life to football youth coaching and was probably the highest qualified of all our youth coaches, passed away suddenly, after a short illness, at 71 on 23 December.

The passing of these men reminded us of the era during which football developed in Australia from the 1950s to the early 2000s, when the game relied entirely on the passion and grit of volunteers to steer it forward. We have a lot to thank them for.

Les worked tirelessly for the game and never made a penny for himself out of it. He worked as a bureaucrat at Sydney City Council and spent just about all of his down time on football. He would chair the committee meetings every Monday evening while every single week day he and a handful of committee members would lunch at the Apache restaurant in George Street talking about football and strategy to take the club forward.

Though Les never had children, he was a father figure to all of us who knew him. After I graduated from high school and moved from the Illawarra to Sydney he hauled me onto the committee as a junior secretary. I was 18.

After his wife prematurely passed away almost 20 years ago he moved back to his native Hungary and never returned. I kept seeing him on my visits to Budapest and it never ceased to amaze him that Australian club games were drawing crowds of 40,000 plus.

Apart from being very good at his work in football, Les was a thoroughly good and decent man. No one who knew him could or would ever say a bad word about him.

Richard Alagich hailed from the famous Alagich family which collectively made enormous contributions to football through three generations and on every level: administration, coaching and playing.

The family patriarch, Josip Alagich, settled in Broken Hill as an immigrant miner from Croatia in 1924. Later he was joined by his three sons, Marin, Rudolph and Slavko. All three sons got involved in forming football clubs in Broken Hill, Sydney and Adelaide.

Joe Alagich, star player with Yugal and the Socceroos in the 1960s and ‘70s is Marin’s son. Young Socceroo Richie Alagich and his sister Dianne, who played 86 times for the Matildas, are the grand children of Slavko.

Richard was the son of Rudolph. Once a fine player, Richard was always more interested in coaching, particularly youth coaching. In the late 1970s Richard decided to get himself the best coaching education possible and went to Yugoslavia to study. He spent eight years there gathering a variety of diplomas, including a sports science degree and a Master Coach diploma.

Upon his return he paid a visit to the office of then Australian Soccer Federation coaching director, Eric Worthington. He placed his Master Coach diploma on Worthington’s desk and said, ‘I am here, ready to work in the Australian system.’

Worthington replied: ‘I’m sorry but we do not recognise that paper. You will have to get your Australian qualifications first.’

At the time the highest Australian coaching qualification in football was a so-called Level 5, a three-day course. Richard, feeling humiliated, turned on his heels and walked out, resigning to the fact that he will have to work outside the system.

Richard was a vocal critic of the then existing youth education philosophy which relied heavily on strength, size and stamina rather than technique. I concurred and it was around then that we became good friends.

Frank Arok was also a fan and it was under Frank’s auspices that Richard started the St George apprenticeship program, Australia’s first.

At various times Richard also worked for other NSL clubs but spent over 30 years conducting the Pacific Coaching Camps.

Richard authored a number of coaching books, all of them endorsed by FIFA. His book, Winning Through Technique and Tactics, is still the best text book for youth development coaches anywhere. He and I also collaborated on a book titled, So You Want to Be a Coach, a book designed for under-educated suburban youth coaches. More recently we also collaborated on a coaching smart phone app.

The Australian youth development system, filled mostly by jobs-for-the-boys coaches, stumbled on without Richard for most of his life. It was a thorough waste.

Dr Brian Corrigan was a pioneering and Australia’s leading sports physician for decades. He was the Australian Olympic team’s doctor at every Games between 1968 and 1988 (barring 1976) but he was also team doctor for the Socceroos for 30 years, travelling with the team for every game.

He was a vigorous campaigner against drugs in sport and at times clashed with the physio staff for handing out all sorts of pills to the players.

But he loved the Socceroos and they loved him. And he genuinely loved the game too. I fondly remember, for example, the many conversations former commentator Mike Hill and I had with him over coffee on the Dizengoff café strip in Tel Aviv.

They were turbulent times. In his first year as ASF president the broadcast rights to football went from SBS to the ABC who promptly dumped its NSL coverage in mid-season the following year. Constantine then re-sold the rights to SBS.

In 1994 the Federation was jolted by the biggest scandal in its history: the Stewart Inquiry into allegations of improper behaviour by the national team’s coaching staff. Later a Senate inquiry was also launched by the federal government into the same allegations.

At the end of his inquiry, Mr Donald Stewart concluded that Thomson's actions in travelling to Dortmund in Germany in 1992 with star player Ned Zelic the day after the Australian under-23 team had beaten Holland to qualify for the Barcelona Olympics, were "highly improper".

Though never accused of being culpable, John Constantine did the honourable thing and resigned in 1995.

Constantine’s major achievements were a corporate restructure of the ASF and Australia’s hosting of the splendid 1993 FIFA World Youth Championship.

He was later inducted into the FFA’s Hall of Fame.

Let me take this opportunity to wish our readers a happy, prosperous, healthy and serene New Year.