Technological faults, future plans and one historic night completed what was an unforgettable end to the 2017-18 A-League season. 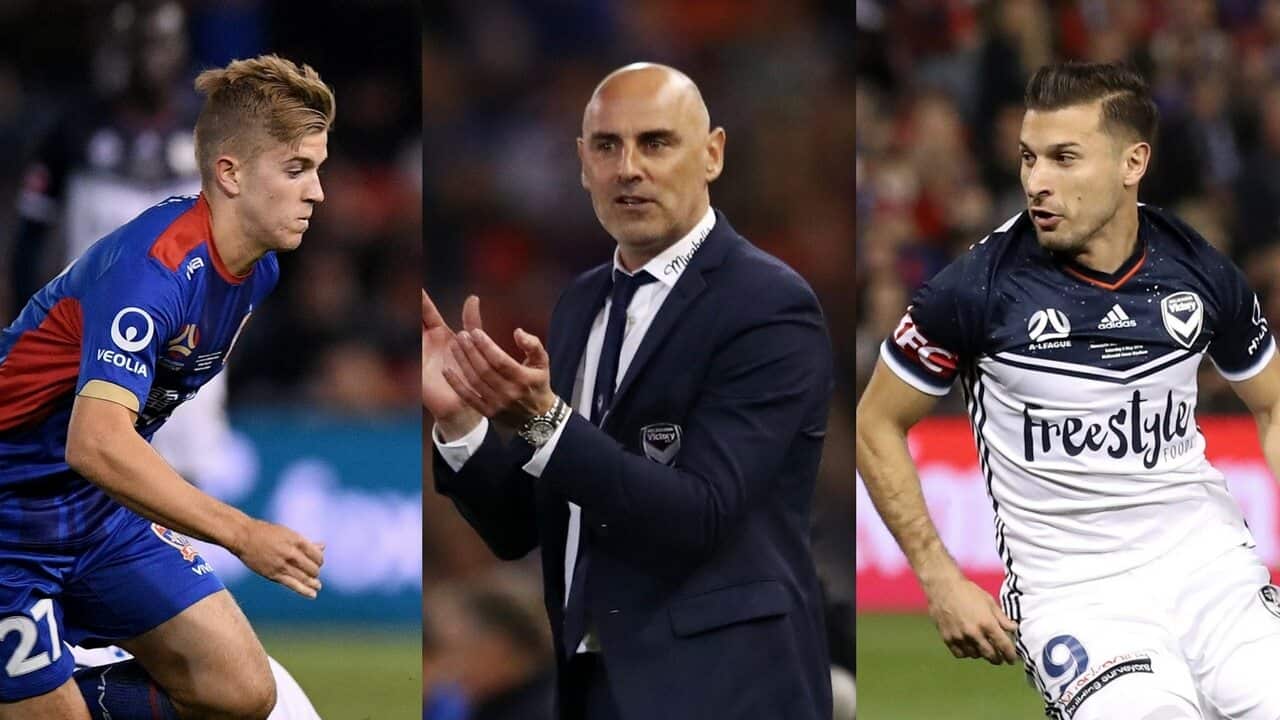 The most controVARsial moment in A-League history

Football Federation Australia sent shockwaves throughout the nation on Sunday after admitting the VAR system encountered a “technical failure” during the A-League grand final.

Despite Fox Sports’ live coverage indicating the VAR had approved Kosta Barbarouses’ goal, a statement released by the FFA revealed the technology had instead suffered a “malfunction” that was not restored until “some minutes after the goal”.

Advertisement
The error allowed Melbourne Victory to retain their early 1-0 lead and ultimately defeat the Newcastle Jets for their record fourth A-League Championship.

“We are extremely disappointed at this failure of the VAR technology,” A-League chief Greg O’Rourke said.

It’s an ironic end to an A-League season that has been spammed with VAR-inflicted issues, be it interpretation or, in this case, installation.

Replays of the goal showed three Victory players in an offside position – including James Donachie, who provided the assist for Barbarouses’ deflected effort.

READ MORE
Fozz on VAR debacle: 'Learning moment for FIFA, not us'

But, ignoring the VAR for one second, what exactly was the linesman looking at? Donachie’s stance was in view, hardly a tight call and one he should have flagged given that, well, is his main job.

This collection of errors has, once again, dragged the A-League back into disrepute and replaced any memory of what happened on the pitch due to what took place off it.

The Australian public was originally told that the VAR was to only intervene in cases of mistaken identity, goals, red cards and penalties.

And after a season in which numerous regular season matches suffered from the VAR’s unnecessary interventions, in the end the technology failed to do its job when it mattered – and was needed – most.

A plan for the future

In just three weeks, the 2017-18 finals series has managed to do what 27 regular season-rounds couldn’t: attract and excite the Australian public.

And after Melbourne Victory’s successful Championship triumph capped off a storied end to the current campaign, A-League chief Greg O’Rourke has promised big changes for the future.

Following the FFA’s decision to expand the competition in time for the 2019-20 season, O’Rourke identified a 14-team league and restructured regular season as the first steps in rejuvenating the game’s growth.

“At the moment we play three times, there’s an argument that’s one time too many,” O’Rourke said. “There’s a small amount of teams.

“So we’ll have a look to see whether a more simple home-and-away (season) with just two rounds makes sense when you expand.”

Despite six out of 10 teams currently qualifying for the post-season, O’Rourke insists there are no plans to decrease the number of participants; hoping a play-off race will instead allow for “higher ambition”.

It’s no secret this proposed model moves to amend key issues prevalent in today’s product, but it works on the assumption Australia’s governing body can successfully introduce four stable teams – a number history suggests is twice what they can handle.

And yet for all this lingering uncertainty, the expansion plan in place is sure to excite fans league-wide and have them hoping it’s done right.

After all, the future of the A-League depends on it.

The VAR’s absurd absence allowed Melbourne Victory to take a 1-0 lead over the Newcastle Jets that in the end proved the difference on Saturday night.

And, amidst calls for a replay, this grand final – outside Victory circles – will go down as one of the most unsatisfying and unjust results in quite some time.

Long balls, the kitchen sink, Roy O’Donovan’s boot; the Jets threw everything they had in attempt to break Victory’s resistance, and for 81 trying minutes, they had no luck.

While all credit must go to Joe Marston Medal winner Lawrence Thomas for his heroic performance between the sticks, one can’t deny the tactical shift that took place.

After Kosta Barbarouses’ effort nine minutes into the contest helped Kevin Muscat’s men into an early lead, the Jets were immediately forced to open up and chase the game.

Naturally, Victory sat back and reduced the spectacle to what Jets coach Ernie Merrick labelled was a “stop-start” affair.

To brand the Jets’ failure to score as the reason Victory “deserved” their win is a comment far too common amongst the general public in the aftermath of the match, as Merrick’s side were forced to conjure a legitimate response to a goal clearly offside in the build-up.

But, as the old saying goes, that’s football – and Merrick would understand that better than anyone else, having been in the game far too long not to come across such moments of controversy.

And it’s for this reason he’ll dust his men off and make it their mission to return next season and make right what they feel was a very big wrong.

After recording one of the worst regular seasons in club history, a stunning late-season revival has seen Melbourne Victory claim the A-League Championship.

With the trophy held high and the backdrop of Victory supporters in full voice for their head coach, it’s hard to believe they – at one stage this season – wanted him gone.

“We were the only ones with belief we’d be able to do something [this season],” Muscat said of his side’s achievements.

“It’s outstanding and one that shouldn’t be underestimated.”

After being thoroughly impressed by Kiwi Kosta Barbarouses during his first Socceroos scouting trip to Australia, Bert van Marwijk returned this past weekend for one last try.
Melbourne Victory’s 1-0 victory over the Newcastle Jets in the A-League grand final represented one final attempt for FIFA World Cup hopefuls to attract the Dutchman’s attention before his extended squad for the tournament is announced on Monday.
Based on the events at McDonald Jones Stadium, James Troisi and Dimitri Petratos are likely to return to the fold, with the latter particularly impressive on the ball and in charge of set-pieces.
The Socceroos will head into camp on May 19, where they will look to build on their 0-0 draw against Colombia in upcoming friendlies against the Czech Republic and Hungary respectively.
Only four A-League players made van Marwijk’s initial camp, but after a rather eventful three months since his departure, time will tell if breakout talents Daniel Arzani and Riley McGree have done enough to make his final Russia cut.