Australia’s loss to Peru confirmed their group stage exit. Here’s what we learned at the Fisht Stadium in Sochi during the Socceroos’ final 2018 World Cup encounter. 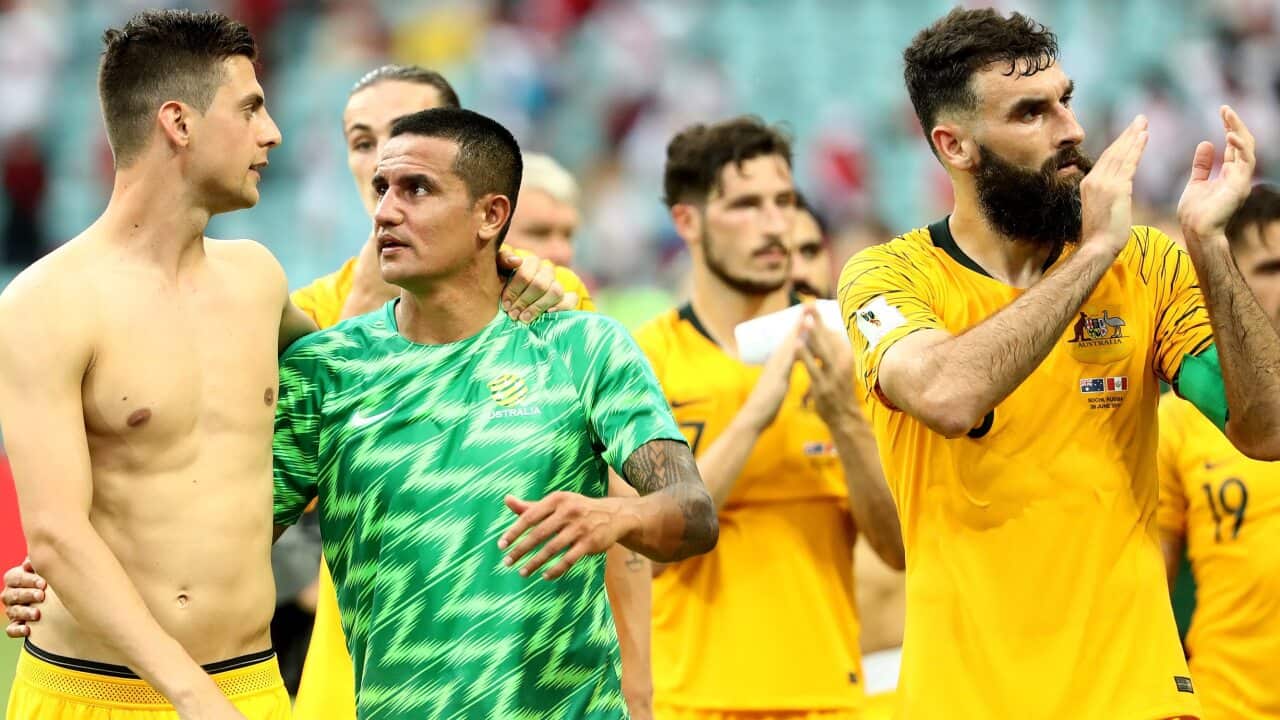 The Socceroos react after their loss to Peru Source: Getty Images

Australia crashed out of the FIFA World Cup on Wednesday morning (AEST), losing 2-0 to Peru after an afternoon of sun-drenched football by the Black Sea.

While France’s draw with Denmark in Moscow ultimately rendered the result in Sochi irrelevant, Australia was unable to secure a consolation point or three.

Peru opened proceedings with an early volley from Andre Carrillo.

The Socceroos were unable to consolidate on several opportunities to find an equaliser as the first-half wore on, heading into the interval needing a miracle to qualify for the round of 16.

A 50th-minute strike from Peru captain Paolo Guerrero snubbed out even those faint hopes, much to the adulation of a stadium packed with La Blanquirroja faithful.

Try as Australia might, they could not find a goal and now depart Russia without a single strike from open play this tournament.

Here are five things we spotted in Sochi.

Bert van Marwijk drew deserved praise after Australia’s narrow defeat to France at the beginning of the World Cup.

His tactical decision-making kept France’s deadly forwards at bay for most of the match.

The Dutchman deployed a similar approach against Denmark and again the Australians performed well, arguably the better team and unfortunate not to find a winner.

Yet van Marwijk’s decision to stick with his conservative approach, with Aaron Mooy and Mile Jedinak playing a holding role at the base of the midfield, backfired against Peru.

The South Americans held back and pressed little against the Socceroos, providing Australia with plenty of opportunity to pass the ball sideways but few chances to drive forward.

While the team started brightly, they were unable to recover from Carrillo – hamstrung by a cautious tactical approach.


Van Marwijk’s conservatism was amply demonstrated with his final substitution.

Time after time on Tuesday in Sochi, Australia’s forward-line lacked the finishing skills needed to put the game away.

Rogic had an early chance in the box, opting for a scuffed shot rather than an open colleague.

Later in the first-half he created several opportunities, putting team-mates in dangerous positions without reward.

READ MORE
Has the Robbie Kruse criticism gone too far?

Whether it was Andrew Nabbout in the Socceroos’ first two matches, Tomi Juric in this one, Rogic, Kruse or Mathew Leckie on the flank, the team’s difficulty has remained the same: Australia cannot score.

While the much sought-after introduction of veteran Tim Cahill and wonderkid Daniel Arzani went some way to enlivening the encounter, neither was able to remedies Australia’s absence of scoring boots.

For their sixth World Cup match in a row, Australia conceded first.

Against France, it was in the 58th minute.

In Samara, Christian Eriksen opened the scoring for the Danes in just the seventh minute.

And on Tuesday, Carrillo found the advantage for Peru in the 18th minute.

While the circumstances have been different, on all three occasions it has left Australia with a mountain to climb.

The Socceroos’ World Cup campaign may have been notable for its lack of attacking threat – while Mat Ryan and his defensive line were widely hailed – conceding first ultimately cost Australia in Russia.

Central defender Trent Sainsbury, who was faultless during the earlier clashes with Denmark and France, had his worst game of the World Cup against Peru.

4. Rogic remains essential – and too-often absent – for the Socceroos

Tom Rogic’s importance to the Australian national team was underscored by their varied attacking threat against Peru.

For patches of the first half, Rogic was a maestro conductor leading his exciting – if blunt – orchestra.

But for much of the second half, the mercurial Celtic star disappeared, and was ultimately substituted.

Rogic found himself on the game’s periphery as Australia needed his creativity the most.

Just 25, the Canberran has a long career with the Socceroos ahead of him.

If Rogic can improve his consistency, he could become an all-time Australian great.

But if Rogic continues to perform as he did against Peru, he will remain a divisive element of Australia’s midfield trio.

It is hard not to feel a glimmer of joy for the thousands of Peruvian fans who have travelled halfway across the world to watch their nation’s first World Cup appearance in 36 years.

Fisht Stadium was largely red and white, Peru’s supporters making a real racket as they celebrated the team’s first two goals of the tournament.


The parties look set to continue long into the night, both in Sochi and Lima.

Australian fans will be heartbroken by their team’s first loss of the World Cup, but at least it has put smiles on the faces of 32 million Peruvians.

After a strong showing in Russia – not reflected on the scoresheet until Wednesday morning (AEST) – La Blanquirroja will be hoping it is not another 36 years before they are back at the World Cup.