The World Game's Lucy Zelic spoke exclusively to Craig Goodwin and his agent, Director of The Pitch Management, Zeljko Susa, about the reasons behind the former Adelaide United star's move to Sparta Rotterdam. 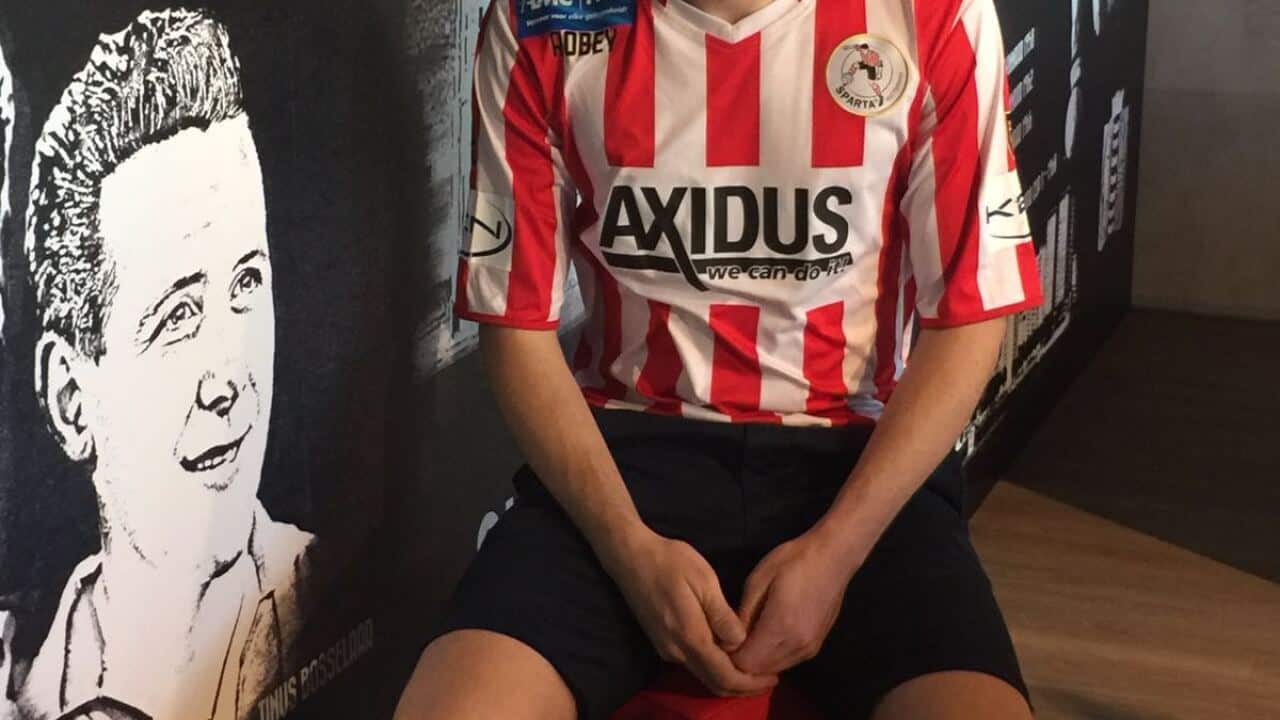 Lucy Zelic: What are you expecting from your time at the club?

Advertisement
Craig Goodwin: "I think first and foremost for the club, being promoted, you’d like to stay in the Eredivisie for next season too. I am sure I’ll find out exactly what the club’s goal is in terms of the season. For me, going to any new club, I am looking to establish myself and trying to get in the team and play on a regular basis and then from there, contributing as much as I possibly can and hopefully putting myself (back) into Socceroos contention."

LZ: Talk me through the process.

CG: "Zeljko told me that they were interested and it was a slow kind of process. Speaking to the coach, he spent a lot of time, when signing a player, just wanting to know how they are as a person and just speaking to him over the last couple of days and having meetings with him he just speaks about, you can be a great player but attitude to us is very important.

"We like to know how a player reacts when his team-mate makes a mistake, how he reacts when he’s made two or three bad passes, how he reacts away from the field when something happens. He likes to know a lot of detail as to how the person is and how they can go about reacting with them so that was very detailed, so I guess that’s why it took a while. It’s good that it’s finally happened and I am really excited."

LZ: How has it been so far?

CG: "Well it’s been great weather so far - it’s been 24 degrees everyday and everyone’s told me that that’s going to change. It’s been really positive, everyone’s been very friendly, I'd like to learn the language a bit, I think it would just help with the process of getting more comfortable here.

"Everyone can speak English pretty well, which will make it easier too, but I feel it would be good on my behalf if I learnt their language seeing as I am living here. Everyone’s been really welcoming, (but) I’ve only met a couple of the players around the club so far. I’ve met Kenny Dougall, the other Australian boy, but only briefly. Tomorrow is my first training session so that’s when I’ll meet all the players, the coaching staff and the physics. It’s been a very positive few days and I am just really excited to get things rolling."

LZ: What was the driving factor in your leaving Adelaide?

CG: "It’s been my dream since I was a kid to hopefully one day play in the Premier League, whether that happens or not is a different story, but playing in Holland is going to be a great achievement for me (at 24 years of age) and I think it’s a good stepping stone and a good place to learn and progress my football.

"In terms of the decision and leaving Adelaide, I didn’t really have to think twice about it. Obviously, I am disappointed to have to leave such a great group of players, coaching staff and the fans too. To win the double and be apart of history, to be part of the team that wins the first ever championship for Adelaide, in Adelaide and then to receive (Members') Player of the Year and the Aurelio Vidmar Club Champion medal - it really has been an amazing season that i’ll never forget."

LZ: How do you self-assess at this point at where you’re at?

CG: I’d have to be quite positive. Since I came to Adelaide I’ve been able to take my game to a new level. This is where I’ve always wanted to be and sometimes it takes longer than you’d like. In an ideal world, you’d be over here when you're 20 years-old, but everyone has there own story and there own path. For me and many others, you always have to work hard for it. At Newcastle, I feel I had a few tough times that I had to work through. Coming back to Adelaide, I felt that I was able to improve my game and to shine a bit and I felt I definitely matured as a player."

LZ: Why was this a good option for Craig?

Zeljko Susa: "We did field a number of offers from various European clubs but with this club getting promoted, the history that it has and being very ambitious, it worked in well with Craig wanting to go to Europe. We wanted him to go overseas and hit the ground running rather than try and go to a bigger club and maybe not get those opportunities right away. He’s got the opportunity to go now and cement a spot in the starting eleven before the next season starts which is pretty important.

"A club like that don’t have the budget to go out and buy a large amount of players and have a large squad. The players that they bring in, they want them to be apart of the first team and hit the ground and start playing regular football. We’ve had a heap of conversations, the coach has also been fantastic. He’s fairly young, very ambitious and wants to prove himself and he plays that attacking brand of football which suits Craig."

LZ: What were you told about Craig’s role with the club?

ZS: "They basically said they’ll use him very similar to Adelaide, they'll play him up forward and if there is a requirement of going back, they can also use him at left-back, so he’s a left sided utility."

LZ: It’s at two year deal plus a year option - how has Craig reacted?

ZS: "He’s just excited. Seriously, you can’t get a more excited kid than he is, he’s like a kid in a candy shop. He just wants to hit the ground running. He had an ambition, he wants to play in Europe and we fielded offers from Asia and things like that, but it was just a case of ‘get me a club, I want to play football and I want to go to Europe’- that was basically the description of what he wanted to do. The coach and the club were pretty persistent with him."