Aaron Mooy was being tracked by Huddersfield Town before he joined Manchester City, with Terriers coach David Wagner insisting the club's signing-of-the-season has the attitude and ability to go on and play in the Premier League. 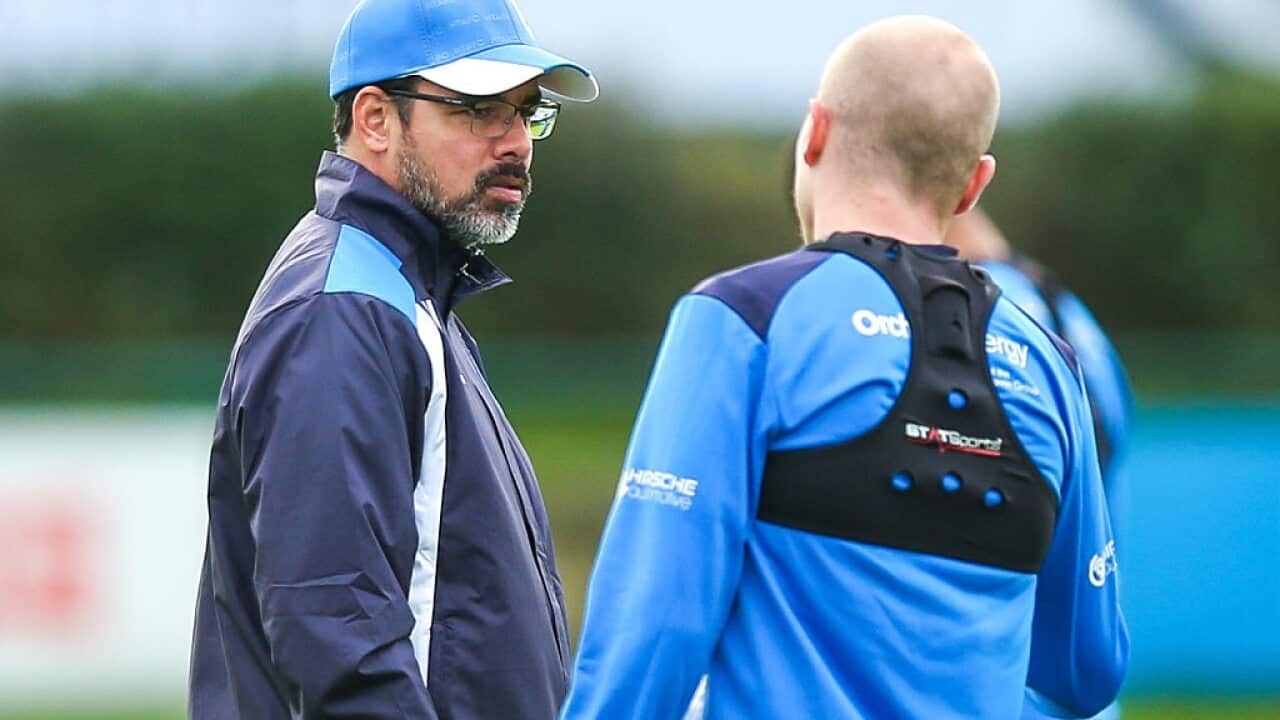 Huddersfield coach David Wagner, left, was confident of Aaron Mooy's quality before he arrived at the club. Source: Getty Images

The German is concerned, though, that unless managed properly by club and country the midfielder’s effectiveness could be blunted as international commitments and the demands of the English Championship take their toll.

“The first advice (about Aaron) came and we discussed the name and watched some clips," revealed Wagner, for whom the coincidence of Manchester City subsequently recruiting him from sister club Melbourne City and then loaning to him Huddersfield is not lost.

"He had some skills which were interesting to us ... we weren’t sure if he was a number ten or a number eight. And then, to be honest, you always think it's Australia and how will the level be there?

“There are always some doubts, but on the other side everything I saw from him was so strong that I thought this is something I would like to try.

“I think it's a credit to our club that Manchester City have chosen us to develop one of their talented players. So far I am very happy with Aaron and what he's delivered.

"His busy traveling period with the national team is over, and he can stay now stay here for the next four months without journeys back to Australia.

“When you sign a new player, it's always exciting and on the other side sometimes surprising. What he did so far for us is excellent.”

Quizzed over the 26 year old's ability to parlay his eye-catching form for Huddersfield - who have slipped from first to sixth in the Championship in recent weeks, Wagner was unequivocal.

"Yes, there is no doubt of the quality and potential and the serious attitude he has to be a Premier League player," he said.

"Hopefully, if he stays healthy, we will see him in the Premier League sooner than later, I am totally sure.

“Manchester City watches every game of Aaron, most of them live, and somebody from the club is nearly always in the stadium.

"They're in contact with him weekly and with us as well. They know everything about Aaron... how he's improved and how he's played."

Wagner has been engaged in what is more a tug-of-love than a tug-of-war with Socceroos coach Ange Postecoglou over how best to nurture Mooy and protect him from  burn-out.

He was unsuccessful in trying to persuade Postecoglou to rest Mooy from the first few days of Australia's recent training camp before the World Cup qualifier against Thailand.

"The national team commitments have caused him some physical problems over the last four months," he said of Mooy, who has already played 24 competitive matches this season.

"So many times he has travelled, so many time changes and so many games he has played," he said.

"I tried to make sure we only bring him on the grass when he is a fresh as he can be.

"So he has played some games not from the beginning and we gave him some days off when the rest of the squad was training "This is why I spoke with the national manager of Australia as well because it's not only us who has to pay for this.

"It’s why we can together manage Aaron, so he keeps healthy, this is the biggest thing.

"Both mangers like to have him and now we have this busy international period behind us we look forward to keeping him as fresh as we can because we need him at the highest level.

"I totally and accept that he (Postecoglou) said (when) I asked him to give Aaron some days off before the Thailand match.

"I understand he likes to have all his players together as soon as he can. I was able to give him advice from my point of view on what Aaron needs and he has to make the decision and his decision was to call him in very early.

"He said he likes to give him a separate program and of course he knows how he was used over the last four months."

"The manager did a good job so far for Australia and now we have to make sure Aaron helps us to get some points on the table."

Softly spoken and self-effacing, Mooy prefers to do his talking on the field, with Wagner observing: "When I first met him we went to dinner together ... he is a very quiet person and he is still quiet.

"But he's totally relaxed, which is important when you play at the highest level. He is very football intelligent and knows when to accelerate and when to decelerate the game and he makes so many details right and he has a very big influence on our game.

“Our identity and style suits a player like him who is so comfortable on the ball.”

Fully aware of the insecurities and unpredictability of a coach's life, Wagner was reluctant to talk about the future of Mooy at Huddersfield beyond this season.

"I have no problem if I am able to work longer at this club with Aaron," he said. "But one thing in this business .. I don't look too far away in the future. We have to be focused on the present and for us that is the next game.

"We have been a surprise package so far this season but this doesn't change our passion to still successful.

"We are still greedy to get some points but where we will be at the end of the season nobody knows.

"We have to make sure we perform and for this we need a strong Aaron Mooy, for sure."