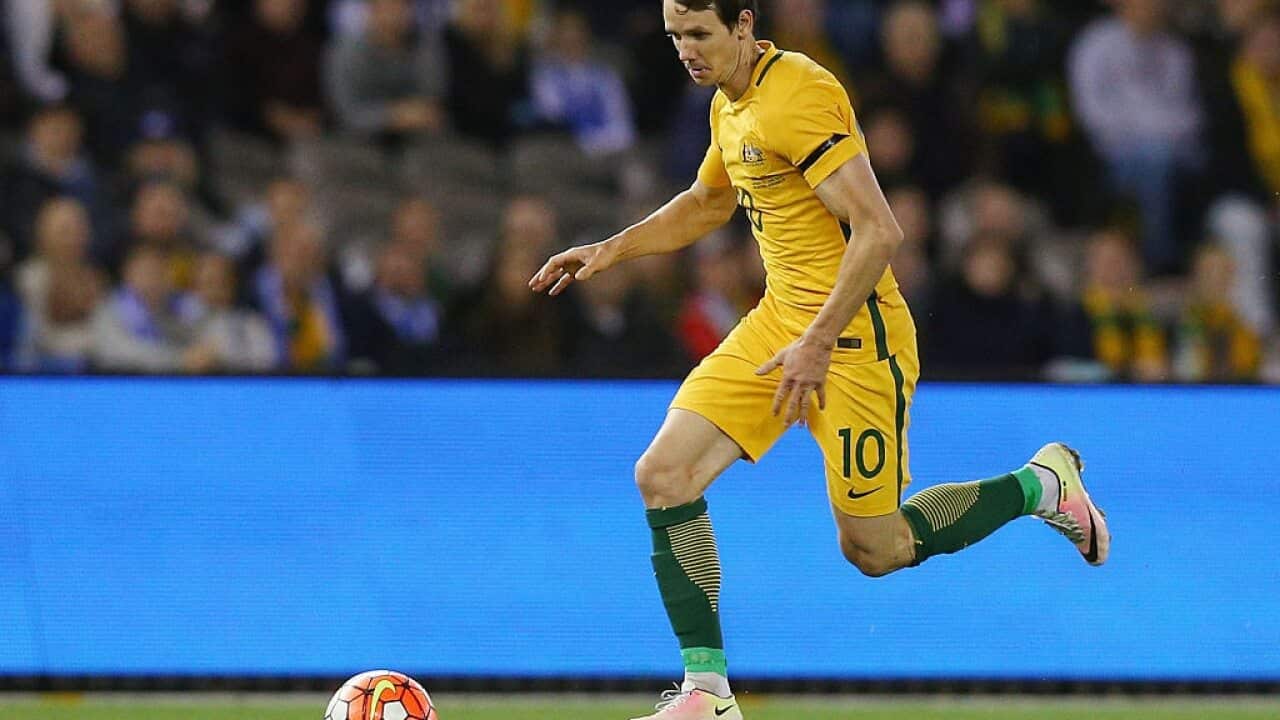 Attacking weapon Kruse isn't allowing speculation over his cub future dilute his desire for what he describes as two “massive matches” against Iraq and United Arab Emirates over the next eight days.

With the European transfer window due to close at 8am on Thursday morning (AEST) – the same day Australia face Iraq in Perth in their crucial World Cup qualifier – Kruse, 27, is unfazed by possibility of a move away from Bundesliga giant Bayer Leverkusen.

“We are all about getting the job done now with the national team, qualifying for the next World Cup and building for the Confederations Cup.” said the Socceroos striker.

Advertisement
“These are two massive games for us, it's going to be tough and I just want to play my part and help the team any way I can.

“My biggest [unfulfilled] ambition is to play in a World Cup. The hardest thing for me in my career was to miss out last time [Brazil 2014] because of injury.

"Going to Russia would be about taking it to the next level and I desperately want to do that.

“We wouldn’t just be happy to just make it make and only play group games… we would be looking to progress beyond that. That's the goal and the coaching staff have instilled in us the belief to accomplish that.”

Kruse's return to the green and gold in March after serious knee and ankle injuries was a breath of fresh air for coach Ange Postecoglou.

But, after nearly four years at Levurkusen, Kruse is keen to maximise his match minutes at club level as he enters the peak years of his career.

His Australian agent is currently on the ground in Germany should an eleventh hour opportunity to move come before the window shuts.

Whether Kruse stays or goes, he is bristling with hunger to keep delivering in Europe – his home for the past six seasons.

“It does cross your mind about maybe [coming home at some stage] but I am still only 27 years old and I while I have a love for the game back home there is also the drive and desire to remain in Europe.

“I am really enjoying my time there ... it’s the highest level you can play at and hopefully I can be there for a few more years yet. Beyond that who knows what will happen.

"I know if can stay injury free there can be some great seasons ahead for me in the coming years, much like during my first years in Germany.

“If I am in the right team, I can perform and make a lot of people take notice … hopefully I do that this season, whether I stay at Levurkusen or go elsewhere.

“I want to do the same with the national team because it's something you always put your hand up for and love to be a part of.

“People may have their doubts after what I have been through the last few years, but I know I can be an important player at club level, and also for my country.

"I am looking forward to this season ... I have been terribly unlucky the last few years and I am due some luck.

"I just want to push forward now and show people what I can do, and I am confident that can be the case."