The first summit finish of the 2021 Giro d'Italia saw Gino Mäder (Bahrain Victorious) win from the breakaway, but also another upheaval in the general classification and a new leader of the race in Attila Valter (Groupama-FDJ) as a select group of favourites showed themselves to be the strongest climbers on the ascent of Ascoli Piceno. 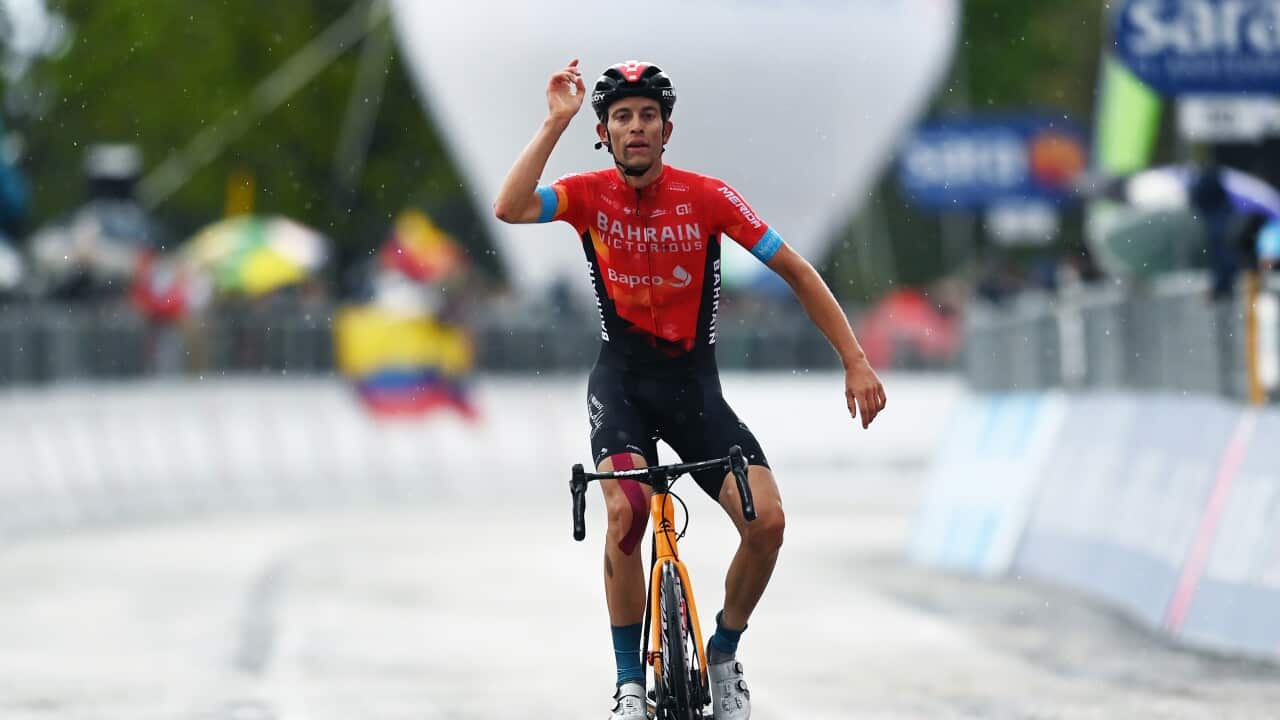 Mäder won the stage with a strong final climb after his Bahrain Victorious teammate Matej Mohorič spent the majority of the stage working at the front of the breakaway. There was to be no repeat of the agonisingly close loss at Paris-Nice earlier in 2021 and the Swiss rider held on for the win over the on-rushing climbing favourites, with Egan Bernal (INEOS Grenadiers) second and Dan Martin (Israel Start-Up Nation) third.

Mäder paid tribute to his team leader, Mikel Landa who crashed out of the Giro d'Italia on yesterday's Stage 5 with a broken collarbone and fractured ribs.

"Yesterday was such a sad day, and today we just said we're going to ride in honour of Mikel's lost Giro," Mäder said.

Advertisement
"It's such a nice feeling after Paris-Nice. As soon as I was alone as the last survivor of the break, all I could think of was Paris-Nice. There was that doubt in my head all the way to the last 100 metres, and then it was such a sweet feeling."

The final climb, measuring 15.5km at an average gradient of 6.1 per cent, loomed at the end of the proceedings but the race had already burst into life in the wet and windy conditions.

Race leader Alessandro De Marchi (Israel Start-Up Nation) was caught out when Ineos attacked en masse and split the bunch between the Forca di Gualdo and the Forca di Presta, the Italian went on to lose 24 minutes on the day. 22-year-old Attila Valter, started the day fourth overall and climbed to an impressive 12th on the stage to take over the jersey.

The Groupama-FDJ rider finished in elite company alongside Simon Yates (BikeExchange), Aleksandr Vlasov (Astana-Premier Tech) and Hugh Carthy (EF Education-Nippo), but Valter's mindset will no doubt be a lot more positive than theirs.

The group finished in the wake of Egan Bernal as he issued a series of attacks in the final two kilometres. Only Remco Evenepoel (Deceuninck-QuickStep), Giulio Ciccone (Trek-Segafredo), and Dan Martin (Israel Start-Up Nation) were able to follow the Colombian's second acceleration, and he still had enough in the tank to sprint for second place on the stage, with Martin taking third.

Valter now leads the race by 11 seconds over Evenepoel, with Bernal third at 16 seconds, and Vlasov fourth at 24 seconds. Louis Vervaeke (Alpecin-Fenix), also with Valter in that stage 4 breakaway, kept himself in the top-five by placing 22nd on the stage, while Carthy, Caruso, Ciccone, Martin, and Yates round out the top-10 all still within 49 seconds of the race lead.

"I could cry, I'm so happy. It's just incredible for me," Valter said. "It's good to make jokes in the morning but to really believe it is another story. I cannot be more surprised and more happy.

"I was planning to do it. I knew I had the good climbing legs this Giro to be better than the first five riders. I just had to hang onto the best climbers and I was really motivated to do it. Of course, the motivation gives extra power. I just hope to enjoy this jersey with the team as much as possible."

An unfortunate incident with 12 kilometres to go to the finish between the Team BikeExchange team car and Pieter Serry (Deceuninck-QuickStep) saw the Australian team vehicle hit the rider from behind, causing him to crash hard. Sports director Gene Bates was expelled from the race as a result and passenger Matt White was fined 2000 CHF by race officials.

The 2021 Giro d'Italia continues with Stage 7, a 171-kilometre stage from Notaresco to Termoli. The second half of the stage runs along the Adriatic coast and could be the first big chance for crosswinds in the race. Watch on SBS OnDemand from 2040 AEST, with the SBS VICELAND broadcast starting at 2120.