Jacob Melling said Melbourne City weren't "anti-football", as Brisbane Roar coach John Aloisi described them, but they were anti-bad results and were no different to any other A-League team in that regard. 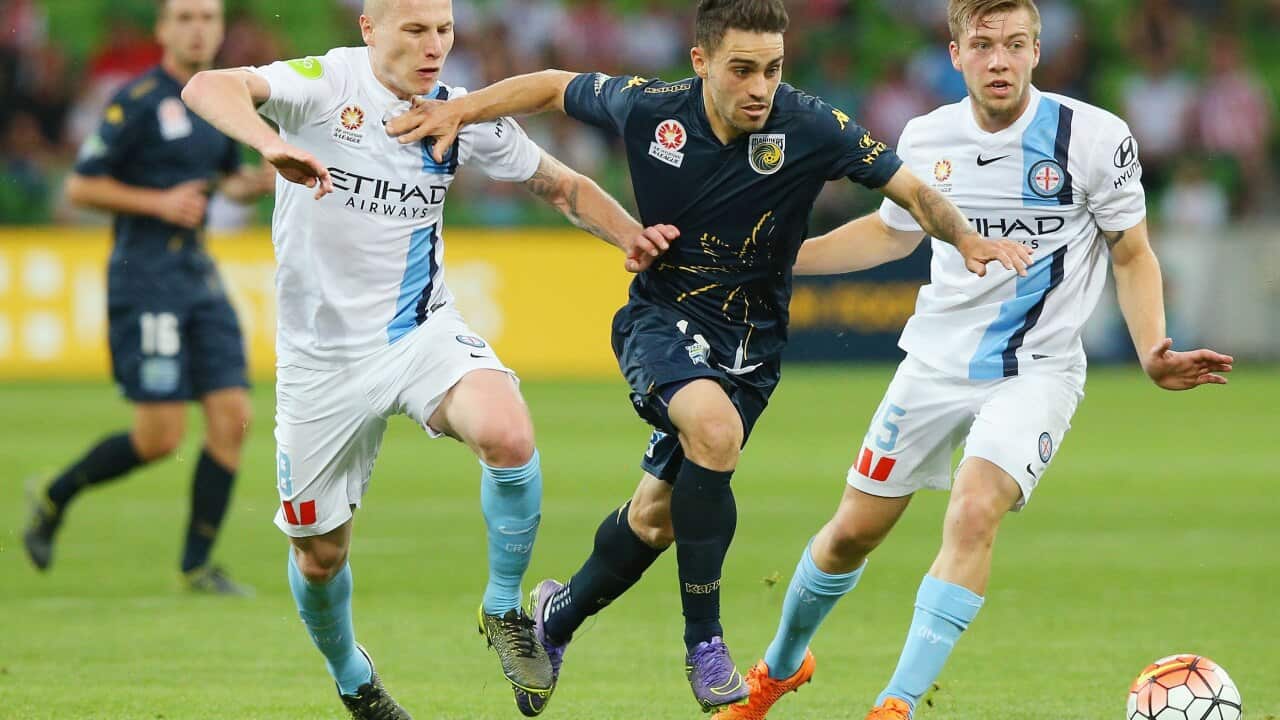 Jacon Melling has been used in midfield and defence this season for Melbourne City Source: Getty Images

Melling said winning, rather than avoiding losing, remained City's priority, but that in the tough times they had to put the hard hats on and try to grind out a result.

Advertisement
City got that result, a 1-1 draw, against Brisbane in Round 7 and are hotly favoured to return to the winning list at AAMI Park on Friday night against a Perth Glory side that is struggling for goals, results and wracked by injury.

After last week's draw, Aloisi, who unsuccessfully coached City's previous incarnation, Melbourne Heart, and was eventually sacked from that job, slammed the opposition for what he regarded as a highly negative approach.

Aloisi said City had been guilty of excessive fouling, particularly on Roar playmaker Thomas Broich, who is the most fouled player in the competition.

"It's anti-football. We're trying to grow the game in this country and they go and play anti-football like that, it's disappointing," Aloisi said.

"We've been going on about it for a while. Thomas has been copping fouls for a long time. It just destroys the good football we want to see."

Melling, normally a defensive midfielder, was switched to the central defence against Brisbane because of City's injury problems in that area and is set to stay there against Glory.

He may only be 20, but Melling had a very considered response to Aloisi's criticism.

"It's not like we play any different (to other teams)," he said. "Every team has those passages in games where you have to try to adapt to the way it's being played and try to get a result.

"You want to play the best football that you can, but sometimes you have to try to grind out a result and that's what we had to do because they were starting to get on top.

"I thought in the first half we were a lot better, we were playing a lot more, but in the second half it was just the circumstances. We were still trying to play, but there were some challenges. It was on both sides, though.

"You hear the talk, but you just don't take it in."

The official statistics from the match showed City conceded 15 fouls to Roar's 11, not a massive difference. But City did collect five yellow cards to Roar's one, which obviously indicates they made most of the more telling fouls.

But the stats also showed City had 12 shots on goal to Roar's nine, certainly a good indication of desire on City's part.

City are the highest-scoring team in the competition, with 13 goals in seven games, but it is also the equal-second worst defensive team, having conceded 14, and therein lies the team's problem.

They can't get consistency, not just from week to week but within individual games, and that is why they hover in the middle section of the competition table. City are currently seventh and could really do with a kill against Perth.

Melling said the City Football Group obviously hadn't bought the club, signed marquee players and spent a fortune on upgrading facilities for the team to then go out and play boring, reactive football.

"You see when we do get the ball down and start playing out from the back we are very good and we can do it well," he said. "But we've got to make it happen for longer periods in games.

"We've got to do it for longer than 35 minutes, or 45 minutes, and get it to 90 minutes. That's the aim. We're working hard on that at training.

"We're a footballing team that likes to play the ball around, but it's at those times when we don't do it as well as we would like that we get under the pump a bit. So there are times when you can't play as you would like and that's the same for other teams.

"If you're under pressure at the back and there's no other option, you're going to put the ball over the top and try to put them on the back foot straight away and that's what you've got to do sometimes to try to win games."

Melling said City coach John van't Schip had not mentioned Aloisi's criticism at training and that the players wouldn't expect him to.

"I don't think there was any need to take it any further," he said. "We're trying to get results, so we've got to concentrate on what we're doing and transfer what we're working on at training on to the field for matches."