Mr Personality: Clisby on why Arnold Schwarzenegger would be a great dinner party guest

Melbourne City defender Jack Clisby is the latest subject of a regular feature where The World Game has a bit of fun with the game's stars by asking them questions they wouldn't normally be asked and letting their personalities shine. 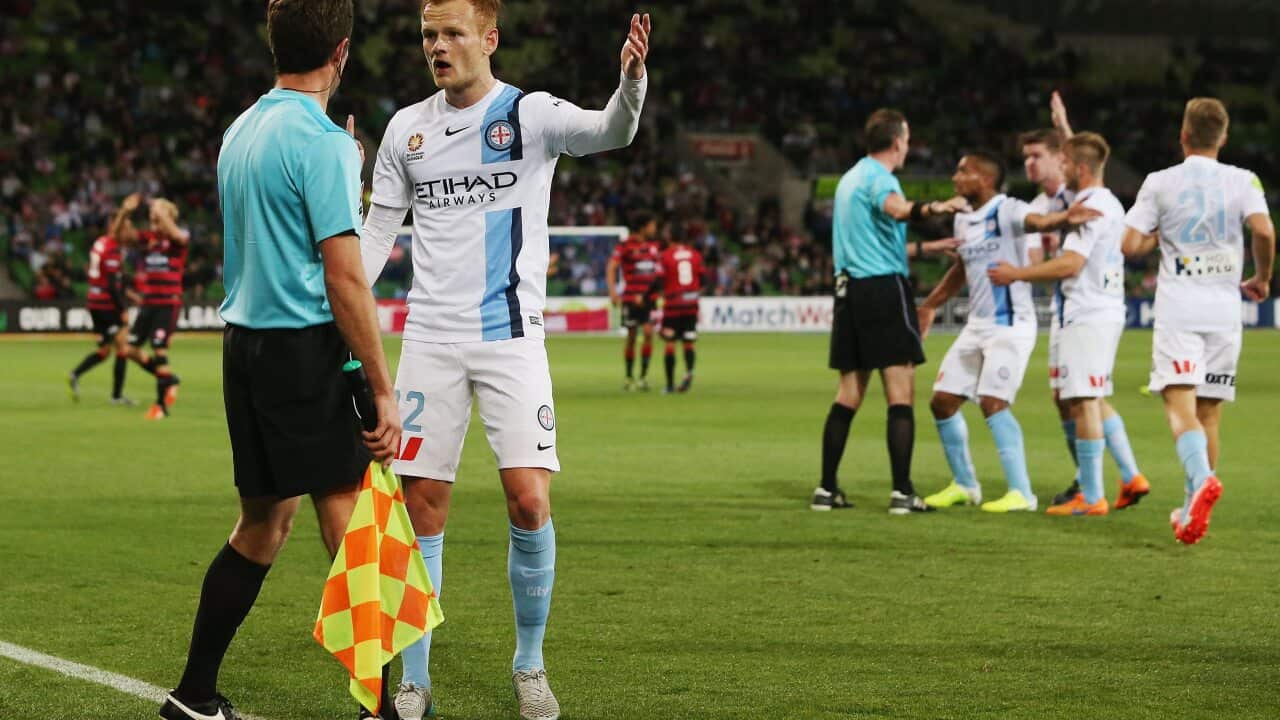 Why he left Perth Glory for Melbourne City.

What he is into, apart from football.

Advertisement
How he used to hammer his dad in shooting practice as a kid.

Why Spain and Las Vegas are on his go-to travel list.

What it's like to defend against the trickiest wingers in the A-League.

Who he would invite to a dinner party, starting with Jennifer Aniston.

TWG: You've crossed the country, from Perth to Melbourne, for your football. How are you enjoying it?

JC: It's been a very worthwhile move. When the opportunity came for me to sign with Melbourne City I jumped at the chance. The only time I had ever seen Melbourne before was going there with Glory for games, so I didn't know much about the city when I arrived, but I've got myself a nice apartment and I live by myself so I don't have to wait up on the other lads or have the TV blasting at midnight or whatever. I live in a good area and I've got good mates I hang around with, there are a lot of good places to eat at and the city is always busy. It's just a different culture.

TWG: What appealed about Melbourne City to you?

JC: I felt I could develop as a player here. The City Football Group have got ambitions with this club, the same as with Manchester City, so I knew there would be a chance here to improve my football and lift my profile as well. I've played pretty consistently since I've been at the club and hopefully I can keep doing that.

TWG: What are your interests apart from football?

JC:  I like shopping, I like going out for a good meal, a few of the boys we go for something to eat and play a bit of pool up in Preston. I live on top of a cafe area, so we go downstairs and play a bit of cards sometimes. I don't mind a bit of the old PlayStation as well, just when I'm kicking back with friends.

TWG: What about music and movies, are you into that?

JC: Yeah, I'm into my music for sure and I like my movies as well. I like a good TV series as well and I've got plenty of time at night to do that. Lately I've been watching Friends on pay TV, I never get sick of that series. I watch a lot of different series.

TWG: Were you an AFL fan growing up in Perth, as well as playing football?

JC: Not so much. I grew into it a little bit as I got older, but I wouldn't say I'm a diehard fan. But I'd definitely support the Eagles over the Dockers, that's for sure.

TWG: What's the best advice anyone has ever given you about football, or life, or both?

JC: Football, just treat every training session and game as your last, because you can never get it back and every session is a chance to become a better player, the same as games. You've got to take every chance you get and enjoy every moment. My best advice to young players is that you've got to enjoy the game. Just kicking the ball around with your mates down the park, that's what I was always doing. As soon as my dad came home from work, me and my brother would stick him in goal and just ping shots at him. He'd made a little goal for the front yard and he was always put into goals while we had a shooting spree at him.

TWG: Did you knock him around a bit or what?

JC: Yeah, fulltime goalie he was, back when I was a striker and I used to bang in the goals, but I'm still waiting for my first goal in the A-League.

TWG: So you were a striker as a kid.

JC: Yeah, I think I ended up playing everywhere but goalkeeper. Eventually I played left-back for a bit and then centre-back for three or four years. I remember I was playing left wing, it was in the State League, and the night before the game one of the centre-backs went down injured and the coach chucked me in there.

TWG: Playing at left-back, as you do, is a tough position in the A-League, with players like Kosta Barbarouses and Romeo Castelen running at you.

JC: (Laughs) It's always the right-wingers that are the best players. Every week the right wingers, or the wingers on both sides if they've got them, are normally the sharpest players on the field, so as a fullback you've got to mentally prepare and analyse the way your opponent is going to approach the game. You've got to know what to expect.

TWG: Have you done much travelling overseas?

JC: Yeah, I played in Scotland  for a year when I was 18 at St Johnstone, in the SPL. I was there for a season in the reserve team. I didn't quite make a first-team contract after that, so I returned to Perth. To be honest I didn't know where my football was going after that, I lost a bit of hope, but my dad told me to give Perth Glory Youth another try and push to be added to the firsts. I was a bit down when I got back from Scotland, but I stuck to it and played a season at youth and a season in the State League and I picked up Player of the Year in the State League and I was on Glory's radar from there. I played a few games in youth and then got signed up for the first team and played the following week and then just took it from there.

TWG: What is your favourite place you've been to overseas, for a holiday or with football?

JC: Scotland would still be the place I've most enjoyed. I've got a lot of relatives over there. Mum and dad moved over from Scotland when Perth was still pretty much still getting built and my brother and I were born here. I went to Thailand in the off-season and that was beautiful. On the jet skis most of the days, laying in the sun, going for a swim, the food was lovely. Had a good time there. Been to England, Singapore and Bali and enjoyed all those places a swell.

TWG: Is there somewhere you haven't been to that you really want to go?

JC: I'd love to go to Spain. The weather, the beaches, it just looks like a lovely place to go in their summer. I wouldn't mind going to see Las Vegas as well, that would be an eye-opener. I'd love to go and have a good look at the US.

TWG: And which sporting event around the world would you really love to go to?

JC: Oh, it would have to be the World Cup wouldn't it? Playing in it would be great and so would watching it. I wouldn't mind going to a Super Bowl as well. I don't understand the game too much, but I think it would be very interesting and a great experience to go to an event like that.

TWG: Finally, if you were having a dinner party at your place and could invite anyone in the world, who would be the four you would invite?

JC: The first one would be Jennifer Aniston, then David Beckham, Samantha Jade and  . . . It's a tough one, picking the fourth one, but I'll say Arnold Schwarzenegger.

TWG: What is it about Arnold that you like?

JC: When we were growing up, me and my brother used to watch action movies with my dad. The old Commando, Predator and all that. It would just be great to speak to him about his movie-making and his body-building, it would be very interesting.

TWG: Jenifer Aniston, is that the Friends connection there?

JC: Friends and movies as well. She's quite sexy in my eyes and she's an actress I've always liked.

JC: I've met her a few times. I bumped into her when I was on holiday in Bali a couple of years ago. I got to speak to her and she's a lovely girl, so she would be a good choice. And obviously Beckham is an easy one to choose, he's one of the biggest football idols for any kid growing up.