It is now 51 years since Australia played their first international game in the FIFA World Cup era. In the coming days the Socceroos will play their 474th and 475th games that came and went in that fascinating half a century, an average of 9.3 matches per year. 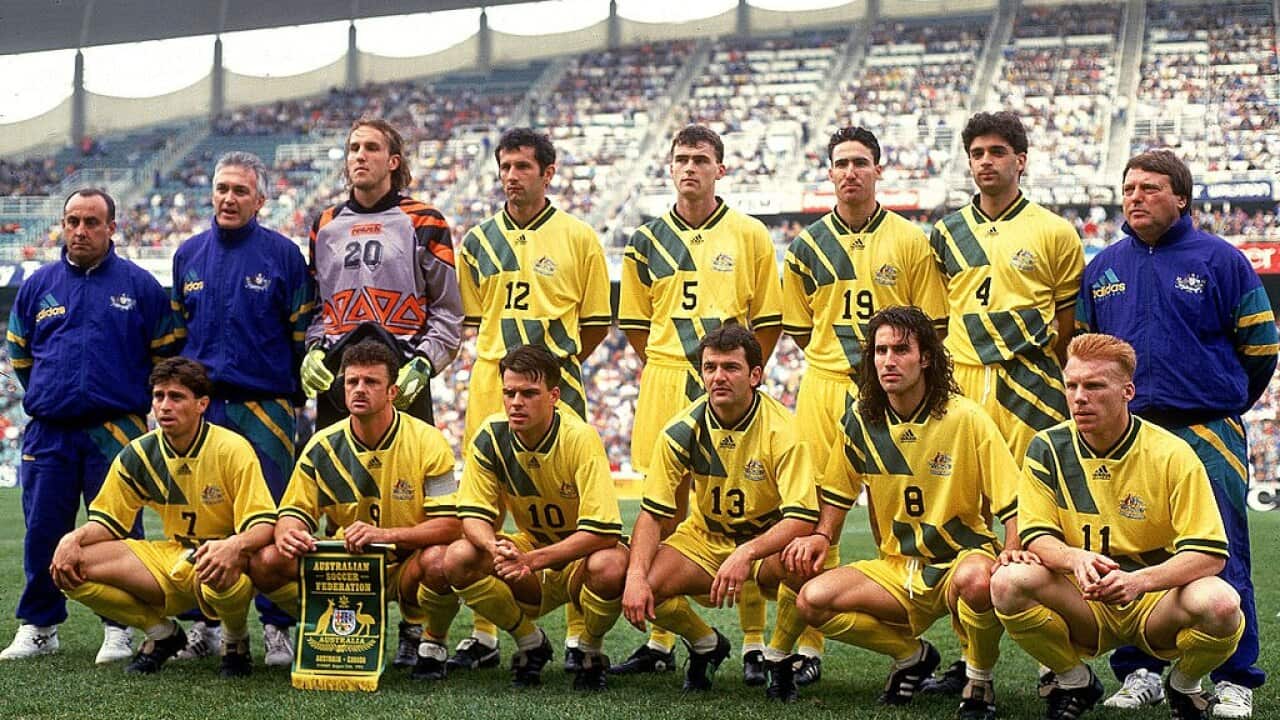 The Socceroos pose before their World Cup qualifier against Canada in 1993 Source: Getty Images

Of course I do not wish to ignore what happened before the World Cup era and the 61 internationals Australia played before that time. But Australia never entered the FIFA World Cup before 1965 and I feel there needs to be a line of distinction drawn between that era, an era of basically 61 friendlies, and the more ambitious modern one.

A total of 127 of the 473 games played so far in the modern era have been World Cup qualifiers. That’s more than twice the total number of internationals Australia played in the old era between 1922 and 1958.

Enormous changes have undergone the nature and fortunes of the Australian national football team since they first stepped onto the World Cup field in 1965 in Phnom Penh to take a 6-1 drubbing from North Korea.

The biggest change, of course, has been the level of professionalism. The 1965 team was made up of strictly part-timers. Some of the players who will turn out against Iraq in Perth and the UAE in Abu Dabi six days later are earning millions from a football only living.

Interestingly, and by the way, in an era dominated by ethnic clubs and ethnic players, only one of the team that took on North Korea in 1965 was of a non-Anglo/Celtic origin: the team captain, Les Scheinflug. This was because the imported players, the Yugoslavs, the Austrians, the Argentinians, were not yet naturalised. Some had already represented their countries of origin.

There were no FIFA rankings in 1965 but if there were it is doubtful if Australia would have been ranked in the top 100. Today it is ranked 59th and once was as high as 19th.

Overall since 1965 Australia’s record is a positive one. Of the 473 games played it has won 238, drawn 104 and lost 134 for a win percentage of 57%. It has rattled up 916 goals for an average of 3.8 goals per game, a goal tally enhanced no doubt by some of those high scoring wins against small, Pacific Island nations.

It is the capacity of today’s Australia to call upon well-paid professionals that is making this huge difference. Even in the 1960s, 1970s, 1980s and even 1990s, when Australia relied on part time players, many of its opponents, like North Korea, Israel, Iran, Iraq, Kuwait etc, not to mention Scotland and Argentina, fielded full time professionals.

Yet after the debacle in Phnom Penh Australia quickly became a formidable force. Four years later, in the 1970 World Cup campaign, Australia failed by just one goal to qualify, losing two one on aggregate to Israel in its final qualifying round. And four years on Australia, with its part timers, qualified for the World Cup finals.

Today’s Socceroos are not just better paid. They are also luckier in the preparations they are given.

In 1965 the team’s preparations consisted of a brief camp in Cairns before they faced North Korea. After the two games against the North Koreans (they lost the second game by a less embarrassing 3-1) the team went on to play a series of friendlies in South East Asia. In today’s world things would be the other way around and those friendlies would be played as preparation games before the big test not after it.

There was not much sophistication and planning surrounding World Cup strategy in the early days. I recall when, in 1985, Australia coach Frank Arok suggested that the team host their qualifier against Scotland in hot Darwin on a rough surface so as to negate the Scots’ advantage. The response from the CEO of the Australian Soccer Federation was: ‘And what if we lose 5-0 in Darwin in front of 3,000 people?’

In the end the game was played in cool Melbourne on a billiard table surface in front of nearly 30,000 and ended 0-0. The Socceroos lost 2-0 on aggregate.

In 1993, as Australia faced an Argentina captained by Diego Maradona, Australia could have pressed to play the second leg at home. It didn’t. It actually wanted the first game at home, fearful of getting whipped in the first away leg and not getting a big crowd in the home leg. Australia drew the first leg in Sydney 1-1 and lost the second leg 1-0.

What is lost in the narrative of the 32-year drought between 1974 and 2006 during which Australia failed to qualify for the World Cup is that in every campaign Australia’s part time players performed heroically against all manner of odds, many of them inflicted upon them by their own governors.

The era of Australia fielding part time, home based players in World Cup campaigns began to die in the mid-1990s. It pretty much ended in 1998 when Alex Tobin, an iconic captain who played for Adelaide City in the semi-pro NSL, played his last game for Australia.

As we gaze with deserved admiration upon the Australians lining up for the coming games we should all remember these selfless pioneers without whom the Socceroos would not exist today.