New Jordan boss Harry Redknapp is open to extending his deal in the Middle East after he finally fulfilled his international ambitions - but offered no promises of 2018 FIFA World Cup progress. 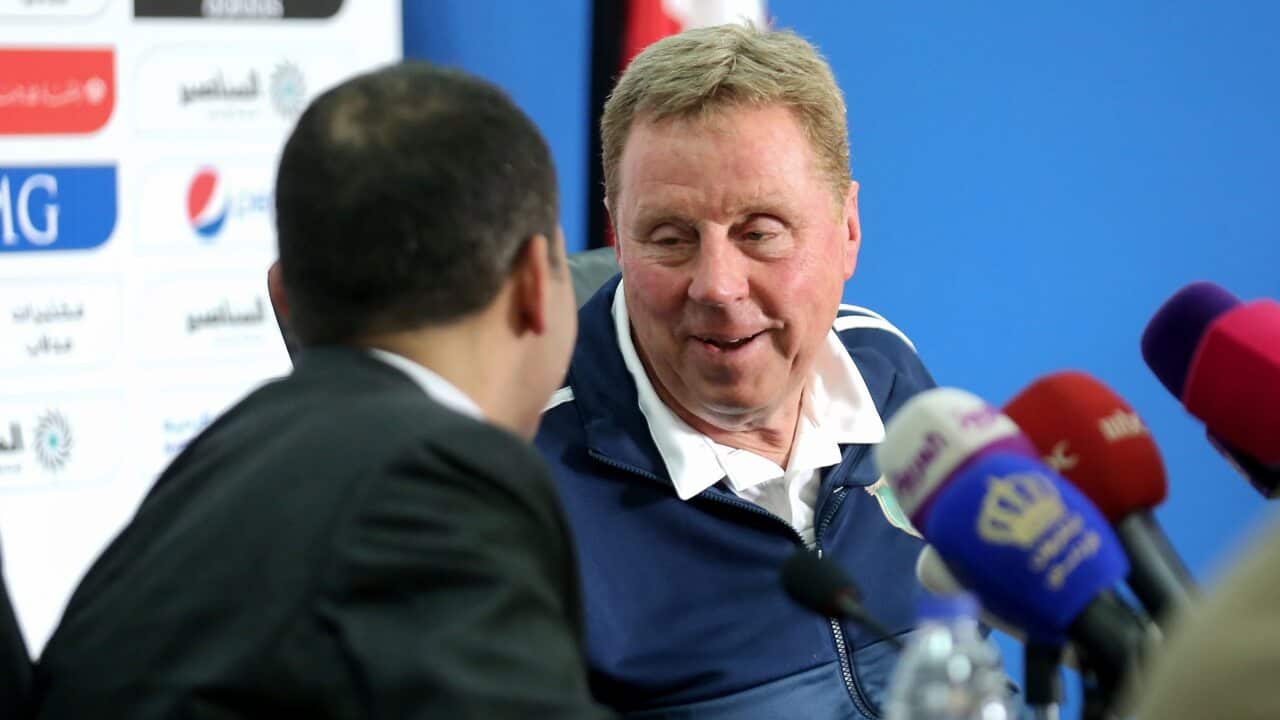 Redknapp and Prince Ali at a joint press conference in Amman on Tuesday Source: AAP

Advertisement
He was unveiled at a press conference in Amman on Tuesday with president of the Jordan Football Association, Prince Ali bin Al Hussein.

Jordan, 82nd in the FIFA rankings, host Bangladesh on Thursday at home before travelling to Australia for a game in Sydney next Tuesday night.

They must win both to reach for the third round of the Asian qualifying section, anything less would leave them reliant on other results to progress.

And Redknapp, who took training for the first time on Monday, would consider staying on if Jordan reach the next stage.

"If we can win the games and everyone is happy I would love to come back. If we don't beat Bangladesh maybe the Prince will put me on the plane home," he said.

"We have to make sure we win, at the moment it's two games but we'll look to the future after these two games. There's nothing I would like more than to be successful in these games."

Jordan are second in Group B and two points behind Australia. The winners of the eight groups progress with the four best runners-up.

"It comes down to the players. I haven't got a magic wand, I can't come here and suddenly go 'we're going to play like Brazil'. If I can get another five per cent to make the difference I'll be delighted," Redknapp said.

"It will be down to the players. They are the most important people. Once they go on that pitch it's down to them. The first game at home gives me a good opportunity to see them.

"It's going to be down to their character to go to Australia and put in a real performance."

The 69-year-old, who has also taken an advisory role at Derby County, had been out of work since leaving QPR in January 2015 and has been joined by long-time assistant Kevin Bond.

"I am very proud to accept this chance. I met the Prince in London and had no hesitation to accept the offer," Redknapp said.

"The standard of the play was good and they have trained very hard for the last seven or eight days. I slept much better last night having seen them. I'm very pleased with the group."

In 2012 Redknapp missed out on the England job to Roy Hodgson and believes he is now in an ideal place to manage in international football.

"I've always thought it would be nice. In lots of ways it would suit me better at my stage rather than be there day-in day-out with all the aggravation. Maybe this is something that is not full on," Redknapp said.

"I should have probably have taken the Ukraine job - I agreed to go a couple of years back - but this is great. Once I said yes to Prince Ali and then Derby came in, whatever happened I knew I was going to Jordan.

"This is good, I have the best of both worlds now.

"It's an international team and so it means a lot to the nation. It's important to me too. Me and Kevin (Bond, assistant) are going to try and get the results.

Redknapp was also wanted by Egyptian clubs Zamalek and Al-Ahly but turned them down.

"You never know what comes around the corner. I had the chance four weeks ago to manage two top teams in Egypt. I met them both but decided I did not want to manage full-time in Egypt - I got offered both within a week of each other. Martin Jol and Alex McLeish took them," he said.

"There were a couple of other offers in the season. This was exciting.

"It had to be something I really fancied and these (Jordan and Derby) were two good opportunities.

Former FIFA presidential hopeful Prince Ali flew to London earlier this month to hire Redknapp having struck up a relationship after a previous meeting.

"He is a world-class manager and he has proven that throughout his career. To have him here is a wonderful opportunity for us in Jordan - as a person and his spirit and the way he is, along with Kevin as well. It's a great opportunity for us," Prince Ali said.

"It very rare you have people of this class. I spoke to many people but immediately it became evident Harry is the man for the job."

Redknapp, who replaces Paul Put after the Belgian was sacked in January, added: "I met him at Greenwich, I only had five minutes with him and I could tell he loved football. When this opportunity came I didn't hesitate. I didn't ask 'how much are you going to pay me?'. I was so impressed and I was backing him all the way in the FIFA elections."