Socceroos need to go back to the drawing board

ANALYSIS: Australia's 2018 FIFA World Cup blockbuster against Japan has shown that a diamond formation can still be an effective weapon for Ange Postecoglou's Socceroos as they seek a spot in the finals in Russia. 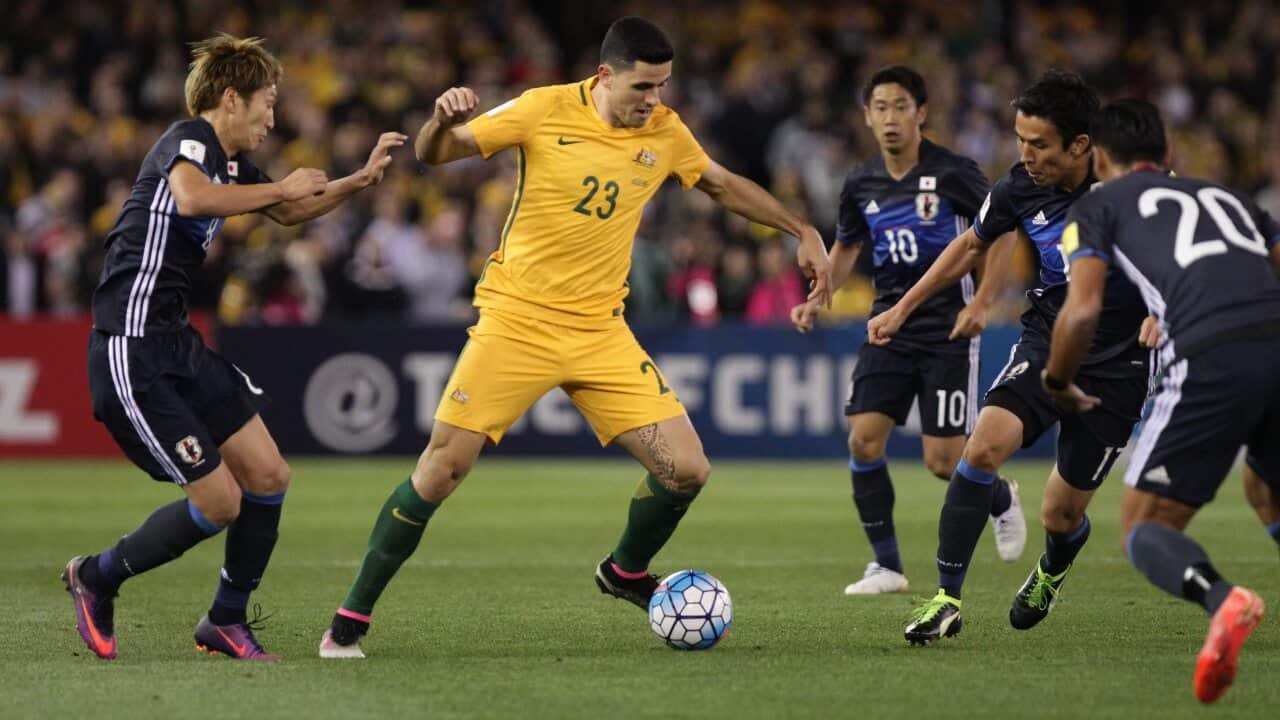 Yet a 4-4-2 pattern will only succeed against the better teams if other aspects of the Socceroos' game are on the mark.

Postecoglou sprang a surprise by reverting to a diamond in the game versus the Samurai Blue at Docklands that ended in a fair 1-1 draw.

Advertisement
He did this to accommodate the creative skills of playmakers Aaron Mooy, Massimo Luongo and Tom Rogic and he ought to be commended for this. They are, after all, the Socceroos' finest players.

He also may have been concerned that if the Socceroos played 4-3-3 his midfielders would have been outnumbered and eventually overrun by Japan's five-man midfield where Borussia Dortmund's Shinji Kagawa posed a serious threat.

Tomi Juric was the only survivor from Australia's three-man attack in the previous match against Saudi Arabia in Jeddah and he was surprisingly partnered by Apostolos Giannou.

Postecoglou's plans received a severe jolt after Japan went ahead in only the fifth minute when Genki Haraguchi got on the end of a slick attacking move after Trent Sainsbury misplaced a forward pass.

Japan were very happy to sit back and let the Socceroos enjoy the lion's share of possession but that is as far as the home side got in the first half.

There was no cohesion, no penetration and plenty of confusion as the 'three tenors' Mooy, Luongo and Rogic failed to provide the spark Postecoglou would have wished for because, not for the first time, they appeared to get into each other's way.

Same as in the game against Iraq in Perth when Australia played 4-4-2, the Socceroos lacked width and 'wingers' Mathew Leckie and Robbie Kruse were conspicuous by their absence against Japan.

Postecoglou later described the first 45 minutes as "very poor and a waste".

The rewards of effective wing play became all too apparent soon after the restart when left back Brad Smith went on a long run deep in enemy territory.

His telling cross split open Japan's defence and Haraguchi turned from hero to villain when he brought down Juric. Mile Jedinak converted the penalty with his usual composure.

The inclusion of Kruse brought more purpose to the Socceroos' attack and the home team looked much better as a result although they did not create any meaningful scoring opportunities all night, which is a worry.

Which goes to show that even though a diamond presents its special problems with this Australian team - they seem to play better with three up front - these issues could be offset by two strikers who are capable of spreading the play with clever movement and a set of two fullbacks who overlap with positive intent and effective crossing.

So is Postecoglou prepared to ditch his favourite 4-3-3 that has brought him success in the 2015 AFC Asian Cup and is he leaning towards a 4-4-2 system on a regular basis?

"It was not the formation that let the team down," he said. "It was because the team was very static and we were looking for solutions in the wrong way.

"I'm not leaning one way or another. I guess what we're trying to do is create a scenario where we have multiple ways of breaking down the opposition. You've seen in these last four games both at home and away the opposition sitting off us. I don't want us to be predictable."

So the jury is out on the merits or otherwise of what's the best formation for the Socceroos.

Australia's next qualifier is against Thailand in Bangkok on November 15.