Anna van der Breggen (Team SD Worx) won stage 4 of the Vuelta a Burgos Feminas, finishing atop the 12.5-kilometre climb to Lagunas de Neila ahead of Annemiek van Vleuten (Movistar) to take out the overall race. 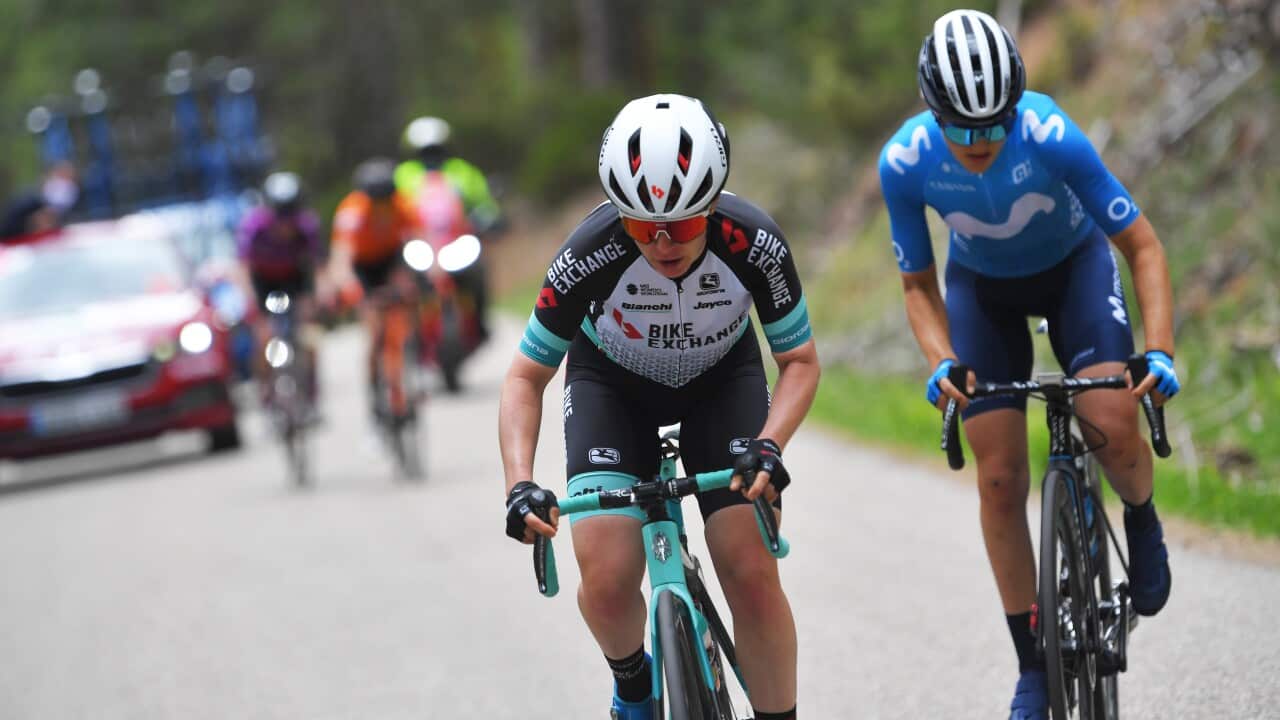 Amanda Spratt of Team BikeExchange attacks during the fourth stage of the Vuelta a Burgos Source: Getty

A large group got free with 50 kilometres left to race, with Amanda Spratt (Team BikeExchange) attacking from the group to force an elite selection on the penultimate climb of the day with just 23 kilometres remaining.

With Katerin Aalerud (Movistar), Anna Shackley (Team SD Worx), and Clara Koppenburg (Rally Cycling) for company, Spratt started the final 12.5 kilometre climb with a 45 second lead on the peloton that proved tough for the pre-race favourites to shut down. Spratt attacked again with four kilometres remaining, but she was to be dropped later by a surge from Aalerud and Koppenberg within the final two kilometres.

The chase, led by Demi Vollering (SD Worx) caught and dropped the leading pair with 700 metres to go before the top climbers fought out the finale.

It was a classic showdown in the finale between van Vleuten and van der Breggen to see who was the strongest climber. Van Vleuten matched the world champion's initial surge towards the finish line and then sat in behind until the final few hundred metres.

On the final corner, van Vleuten tried to launch a sprint around the outside, but van der Breggen had the shorter distance to travel and was able to match the acceleration before pushing clear in the final few metres to win the stage and the overall.

“We needed to do something, the group in front had a lot of time at the beginning of the climb," said van der Breggen after the finish. "We had Anna Shackley and Karol-Ann Canuel there, that was really good. But then Shackley was dropped from the first, so Karol started to do some work, and then Demi did a lot of work with a high speed.

"It was hard until the finish, and it was really steep in the end. I tried to make the best of it, and it worked out. I was feeling well, so I was waiting and had something left to counter an attack. In the end, I put the speed up a bit and it was enough to win.”

Annemiek van Vleuten took over the purple jersey as the leader of the Women's WorldTour by dint of her runner-up finish and was satisfied with that at the finish.

“Of course you always want to win, but I think we did things well and I’ve got to be happy with this second place and the WorldTour jersey," said van Vleuten. "To my understanding, this is more important than winning a race as it means you have been there winning or contesting the victory in many events over the whole season.”

“We tried everything to take the GC and the team played its cards really well, sending Katrine [Aalerud], Jelena [Erić] and Paula [Patiño] to the front and trying to break the other teams’ strength with their attacks. I was able to stay with Anna and tried to overtake her into the final turn, but she was simply stronger. As I said, I’m satisfied with second."

Australian Amanda Spratt animated the race, highlighting some good form ahead of some key challenges in the 2021 season. She was aggressive to put herself in a very dangerous move and then nearly managed to take the attack all the way to the line.

“We knew I had a good chance in that group as one of the strongest climbers, I just had to be patient," said Spratt. "I attacked on the penultimate climb and then again on the last climb a few times to try to shake the others. Maybe I was a little too keen at the start with the hard final, but honestly, I am happy with my ride."

Grace Brown was the top Australian finisher on the stage in ninth, just ahead of Spratt in tenth on the day to take seventh overall on the race after leading early following her opening stage victory.