Melbourne City will win a maiden A-League championship and the Premiers’ Plate, according to their record against fellow top six teams this season. 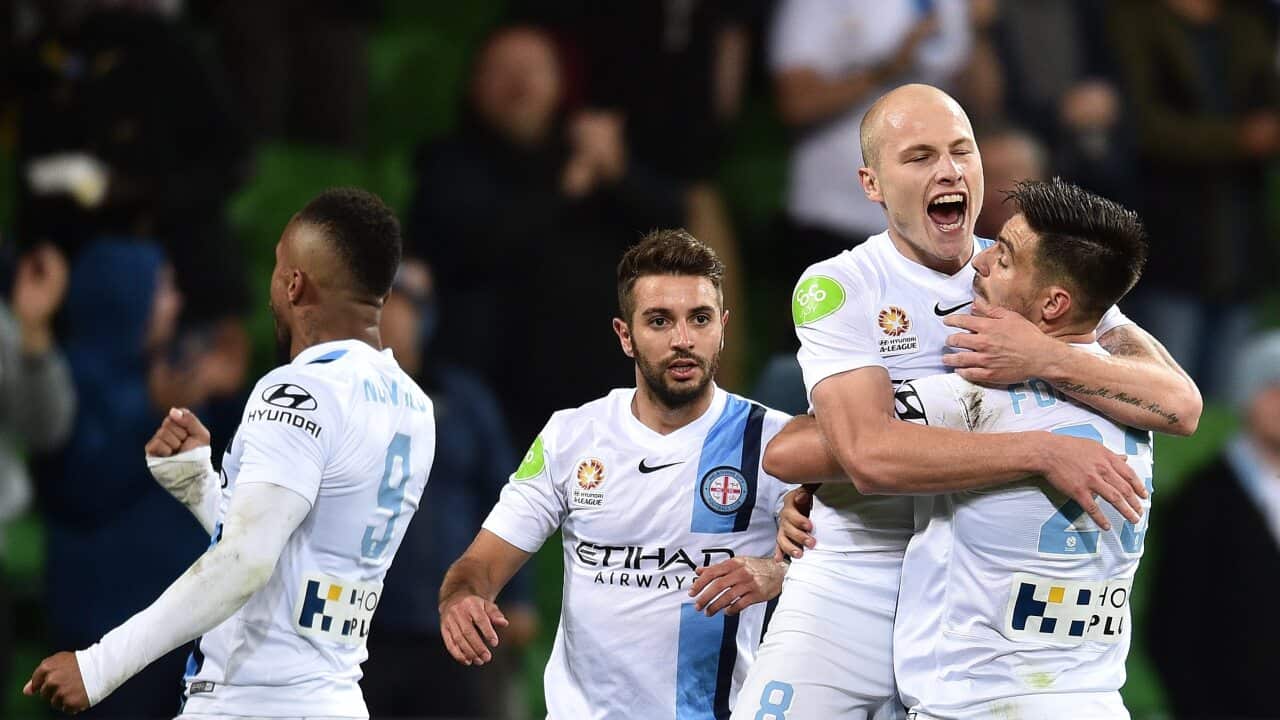 Advertisement
John van‘t Schip’s side have lost just four of their 13 games against finals-bound opponents - Western Sydney Wanderers, Brisbane Roar, Adelaide United, Melbourne Victory and Perth Glory - and their percentage of points from these matches, represents the best in the competition.

With two wins and a draw in their last three matches against fellow top six outfits, City, who currently sit top of the A-League, face Glory and Adelaide in their final two regular season matches.

Unbeaten against both sides this campaign, including three wins, a City side buoyed by the sublime form of attacking trio Bruno Fornaroli, Harry Novillo and Aaron Mooy, will fancy themselves to continue their dominance in recent clashes and two victories will see them claim the Premiers’ Plate.

Western Sydney and Brisbane, statistically the next best performed top-tier sides, might have something to say about the 2015-2016 finale.

Despite taking just a point from their last three clashes against their top six rivals, Tony Popovic’s Wanderers have only been defeated on four occasions to the competition’s best sides.

Throw into the mix their slightly easier run-in to the finals, against cellar-dwellers Central Coast Mariners and second-from-bottom Wellington Phoenix, and a tight-knit defence that has only conceded 20 goals in 15 top six clashes, and the 2014 AFC Champions League winners will put pressure on City.

Likewise, Brisbane shouldn’t be written off, particularly after claiming seven wins against their top six opponents – the most of any finals-bound side.

John Aloisi’s outfit have also smashed home 27 goals in 14 outings, only two goals fewer than the 29 scored by City.

Despite being the hottest team in the competition in recent months, Perth's stats against the competition’s best aren’t in favour of Kenny Lowe’s men at all.

Glory have won four of their 14 games against top six opponents and they haven’t faced a finals-bound side since their 2-1 loss to the Wanderers on 26 February.

This soft run in the lead-up to Sunday’s clash against high-flying City may prove fatal for Perth, despite their resurgence during the second half of the season, which has seen them rise from last to fifth.

Although Adelaide have the best defensive record among top-six clashes, conceding 17 goals in 14 matches, their attack has only yielded the same number of goals – the fewest of the title contenders.

With defence often being the difference at the business end of the season though, it is hard to discount a Reds outfit that is unbeaten in 16 of their last 17 clashes.

Adelaide are also unbeaten against Western Sydney this season, with three clashes between the two competition heavyweight’s giving up just two goals – possibly a sign of what to expect in the finals.

While many put the Reds' poor start to the season down to players getting accustomed to coach Guillermo Amor's tactics, statistically Adelaide played each of the other top six sides in the first five rounds, resulting in just two draws.

Finally, despite champions Victory having an indifferent campaign, they will also be quietly confident that they can produce a finals assault.

Last year’s double winners have won four of 14 clashes against their top six rivals, like Adelaide and Perth, but Kevin Muscat’s side will take solace from their recent 2-0 win over the Wanderers.

Similar to Adelaide, however, Victory’s attack has struggled at times against the competition heavyweights and with 18 goals in 14 outings, a lack of firepower - as amazing as that sounds for a side that contains Besart Berisha - could prove their Achilles heel.