The False 9: Round 1 - Brosque insists Bobo hasn't even scratched surface yet

The False 9 is back with a unique wrap of all of the weird and wonderful moments from the A-League, starring Bobo, Matt McKay, Jacques Faty, Paul Okon and Kenny Lowe. Plus, a special tribute from Split Enz. 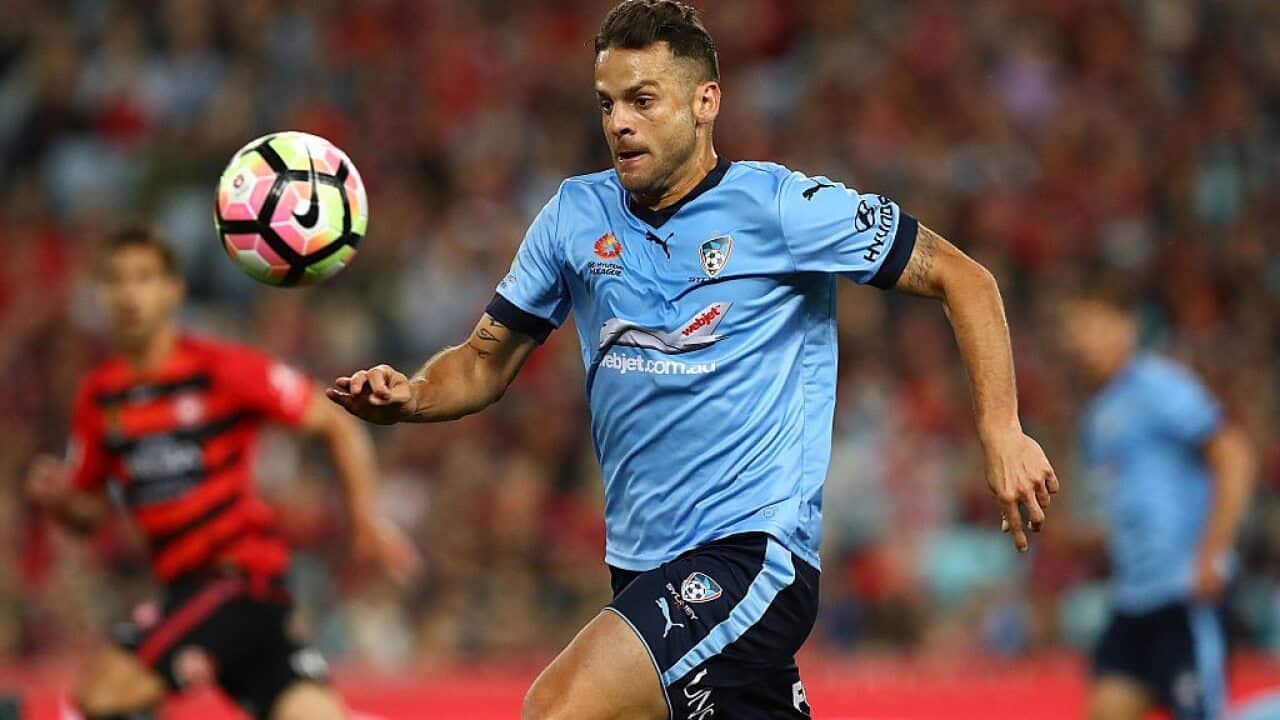 Sydney FC fans who are delighted with the early signs shown by Bobo will no doubt be thrilled by Sky Blues captain Alex Brosque's declaration that they haven't seen anything yet from the marquee striker, and that when he reaches his peak he will explode in the A-League.

"So for him to play the way he did against Wanderers and score a goal in a 4-0 win was a great sign for him and us.

Advertisement
"I'd say he's somewhere around 90 per cent now. It's just condition-wise. He's almost there, but he just needs to get used to everything, the pace of the game and that.

"He'll get way better than what we've already seen from him so far."

At his only previous start for Sydney, in the 3-0 win over NSW NPL side Blacktown City in their FFA Cup quarter-final, Bobo scored one goal and had two assists, so he is not only a finisher but also unselfish.

Brosque said that was the perfect blend for a striker because it meant there would be less times when Bobo wasted an opportunity by going for a shot that simply wasn't on.

"Exactly. People ask me what to expect from Bobo and I say goals are obviously a big part of his game, but his work-rate as well," he said.

"He's someone who works hard and is unselfish. We can see it in training, he's not always looking to get the shot off, he's trying to link up and bring others into scoring opportunities.

"He knows when to shoot and when to pass and he adds to the feeling within the team that everyone is pushing for the result rather than individual glory."

Brisbane Roar captain Matt McKay began the clash with Melbourne Victory celebrating what was his 200th game in the A-League. He finished it early, with a red card though.

'The angry ant' was typically upset over his dismissal, which came when, sitting on a yellow card, he received a second for tugging on Fahid Ben Khalfallah's shirt.

It was the fifth red card for McKay in his career with Roar and he has joined former Victory player and now coach, Kevin Muscat, on that number.

But he is still well behind the runaway leader for red cards - Nigel Boogaard - who has 10.

On a weekend when there were three players red-carded in the five games, Boogaard is to be congratulated for not being one of them.

He had a fine game in the central defence for Newcastle Jets in their 1-1 draw at home against Adelaide United.

In honour of the dismissed trio - McKay, Melbourne City goalkeeper Thomas Sorensen and Western Sydney Wanderers left-back Brendan Hamill - False 9 invites the mighty Split Enz back to the stage for the first of what will no doubt be several performances by them this season.

It normally feels great to score two goals and no doubt Perth Glory striker Adam Taggart, in his return to the A-League, was on a high there for a while after helping to put his team up 3-0 at home against Central Coast Mariners.

But after the Mariners, last season's A-League wooden spooners by a mile, fought back to get a 3-3 draw, Taggart was only thinking about the disappointing result.

"I think it feels like a loss to us at home. We started off so well and so strong. We really need to take responsibility for that performance and be a lot better in that second-half."

Josh Rose puts his hand up.

Jacques Faty was awful in defence in the first-half for the Mariners against the Glory, and suffered the ignominy of being replaced at half-time.

But Mariners coach Paul Okon largely spared him at the post-match media conference.

"Yeah, well, Jacques at the moment is a little underdone," Okon said.

"He got a red card in our second last friendly game against Phoenix, so he hasn't played for two weeks and, you know, maybe a little bit of conceding so early affected not only him but, I think, the whole defence.

"And he copped a knock, he had a cork, and we didn't want to have anyone out there in the second half who wasn't at 100 per cent, so the change was not really tactical.

"We wanted to make sure in that centre of defence we had someone who was 100 per cent and I thought Jake (McGing) was excellent in the second-half."

When a team wins 4-0 it's easy to concentrate on how well their attack played, but let's not forget how well Sydney did in defence against the Wanderers, and leading the way was Matt Jurman.

READ MORE
Jurman has 'fear' warning for defenders against Sydney

The club's Player of the Year award winner from last season hadn't started in any of the team's three FFA Cup games, but he had been impressive in several behind-closed-doors trial games against other A-League teams - as he built up condition after a setback with a back injury.

"I'm like anyone else, I want to be playing every game," Jurman told False 9.

"I wasn't really sure if I'd be playing against Wanderers, but I loved being out there in front of a big crowd and I'd love to stay there ever week.

"There is a lot of competition for places and you could be out of the team straight away with a bad game, so it's a good start for myself and the team and I'm looking forward to us building on this performance and this result and seeing how far we can go this season."

Asked if was a good wake-up call for his team to have been reined in for a 3-3 draw after leading 3-0 against the Mariners, the Perth coach said the answer was a lot simpler than having to delve deep into his players' psyche.

"So you go back to the drawing board, have a look at the reasons why, try to understand that and effect it as best you can. You know, it's not rocket science."