The five most influential figures in Sydney derby history

The 15th clash between Sydney FC and Western Sydney Wanderers will take place in front of another big crowd at ANZ Stadium on Saturday night. The World Game looks at the men who have been the derby's biggest movers and shakers. 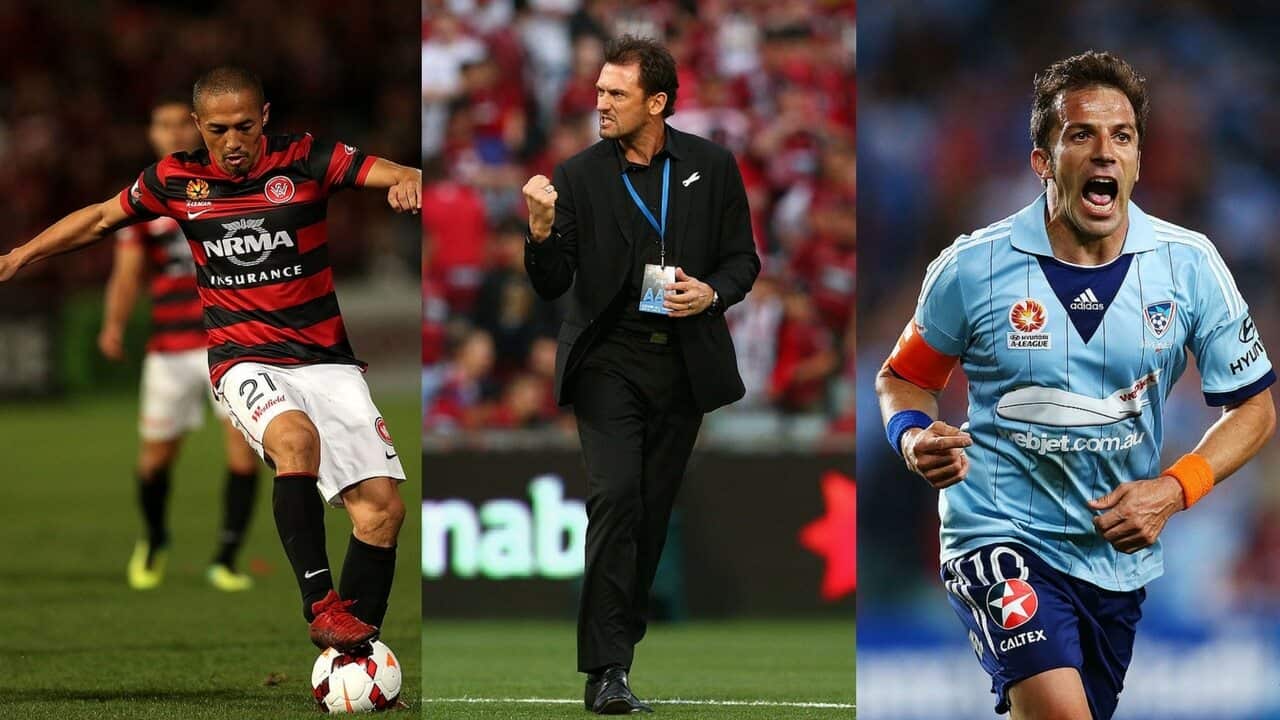 "Arnie" was late to the party, but he quickly settled in and has been having a ball ever since.

The Sky Blues are unbeaten in the eight derbies they have played since he took charge ahead of the 2014-15 season, with five wins and three draws.

The Wanderers have, of course, only ever had one coach - Tony Popovic - whose team had a record of three wins, two losses and one draw in derbies before Arnold came along.

Frank Farina coached Sydney five times in derbies, for one win, three losses and one draw. Ian Crook was in charge of the Sky Blues for just the one derby, which they won.

The derby needed the big stars to stand up and help put it on the map and of course "ADP" played his part to perfection.

The big stage naturally agreed with Sydney's marquee man and his contribution ensured the Sky Blues were able to split the results with the Wanderers in the first season of their clashes.

He scored in their 1-0 win and a 1-1 draw, both times at Parramatta Stadium. The Wanderers won the other game 2-0 at Allianz Stadium.

The derby was also a favourite of Western Sydney's former marquee man, who played his part as well. He was always dangerous in these clashes.

In his second season at the club, the Japanese playmaker scored his team's second goal in their 2-0 win at Allianz Stadium.

The Wanderers won the second derby 1-0 at Pirtek Stadium, through a Brendon Santalab goal, and in the third clash Ono did his best to put them on the way to a clean sweep by scoring the opening goal of the match, but Sydney came back to win 3-1.

Interestingly, the Wanderers haven't won a derby since Ono left the club.

It was important for the growth of the derby that the established club, Sydney FC, didn't run over the new club in those early clashes.

"Popa" made sure that didn't happen.

He formed a team that was highly competitive from the start and which went on to win the Premier's Plate and make the grand final in the club's first year in the A-League.

They made the grand final the following year as well and their record of three wins, two losses and one draw in derbies in those first two years made the rivalry genuine.

You don't attract a record crowd of 61,880 to an A-League match, as the two teams did at ANZ Stadium for the first derby of this season, unless the event has soul.

There hasn't been a player who has embraced the us against them mentality of the derby any better than Brosque.

He really gets the meaning of these clashes, to the extent that during an interview at Sydney FC's season 2016-17 launch just ahead of the derby in round one he said matter-of-factly of the opposition: "We hate every single one of them."

Brosque was in the first season of his second stint with the Sky Blues when he scored the winning goal in his first derby, in October, 2014.

It was a cracker of a game in which Sydney came from 2-0 down to win 3-2 and scoring the clincher was one of Brosque's finest moments in the A-League.

He scored his second derby goal when Sydney won 4-0 in the first clash of this season.

Brosque is a fierce competitor. These sort of games are right up his alley.