The great battle of tactics

After Shane Smeltz smashed in Sydney FC’s winner in the dying seconds of the Sydney derby it was met with a collective groan from the Wanderers’ fans. ‘Lucky bastards,’ or words to that effect. 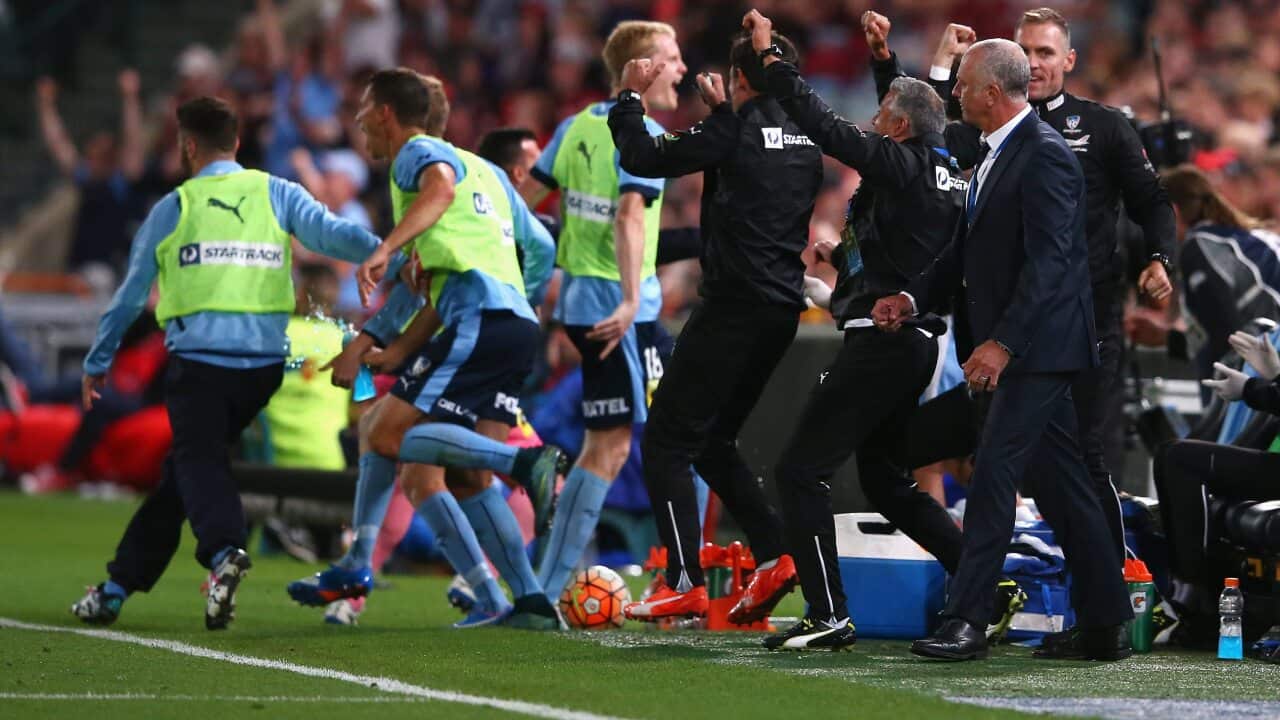 Later Smeltz insisted luck played no part. Rather it was a case of his team sticking impeccably to a strategic game plan.

"We were away from home and we have to come here to do a job, that was our game plan and we did that to a tee. Yeah OK, there were a couple of opportunities that we allowed them in but you could always sense out there that we can hurt them and that's the way it happened," Smeltz said.

Of course the game plan Smeltz referred to was primarily a defensive one, designed to asphyxiate the Wanderers’ attacking ambitions, cut off their string of passes and hit them on the break, stealing the goals needed to defeat their local rivals yet again.

I tend to agree with Smeltz. Sydney FC went to Paramatta with a game plan that worked. They won despite conceding territory and possession to the Wanderers and that was always their plan.

Consider the game stats. The Wanderers had far more of the possession, 65 per cent, more shots on goal, nine to six, and created the more chances. They made 576 passes to Sydney’s 312. But Sydney won. You may not like the way Sydney played, which was basically on the counterattack, but it is a common and legitimate way of playing which is as old as the hills.

The only criticism I would have is if you call yourself the glamour club of the A-League, as Sydney FC have often claimed to be, playing counterattacking football is not a good look. Indeed it trashes the brand.

But the game highlighted the classic battle of tactical mindsets that continues to dominate football, not just here but the world over: whether to play proactively or reactively.

The A-League is a good microcosm of this reality. Precisely half the ten teams play proactively, the other half reactively. The proactive teams are Brisbane Roar, Western Sydney Wanderers, Melbourne City, Melbourne Victory and Adelaide United. The others, Sydney FC, Wellington, Newcastle, Perth Glory and the Central Coast Mariners, all play reactive football. Sydney FC diverts from this on occasion but against teams they see as proactive they will always play reactively.

Being a proactive team, the world champion of which is FC Barcelona, means always taking the game to the opposition, maintaining ball possession and attempting to control the game. Being a reactive team is to be the reverse, to acknowledge that your opponents will always try to attack and the best way to counter that is to soak it all up, lull your opponents into a false state of security and hit them on the break.

Proactive football is energy sapping and requires supreme fitness as well as players of good technical quality. It requires pressing your opponents in their own third of the field to ensure that once the ball is lost it is recovered quickly. Possession is everything because, says the dogma, without it you cannot win.

Reactive football is far from new. The renown tactical analyst, Jonathan Wilson, took it back to 1907 when he recently wrote:

‘When Herbert Chapman took charge of Northampton Town in 1907, he realised that dominating the ball was not in itself enough to win matches. What was more important was where you had it and in what circumstances. Accordingly he had his side sit deep, looking to spring forward and attack the space behind their opponents. He was the first theorist of counterattacking football, a principle he went on to employ with great success at Huddersfield and Arsenal. His style wasn't popular. Many thought his sides were simply lucky; others thought to play like that was unmanly, somehow improper, a betrayal of the spirit of the game. Chapman's revelation continues to shape football today.’

But they should beware for these things are cyclical. Reactive teams have won big titles before, like Inter Milan winning the UEFA Champions League in 2010 and Chelsea doing the same in 2012. Italy, which won the World Cup in 2006, was primarily reactive.

The next big battleground, in this perennial war of tactical dogmas, will be the European Championship of 2016 in France. Will the kingpins of proactive football, Spain, win again? Or will it be some nation with less attacking zeal, like Greece in 2004, that will carry the day?