UAE star Abdulrahman is in a class of his own

It takes a special player to have fans and coaches from opposition teams admit they enjoy watching them play. 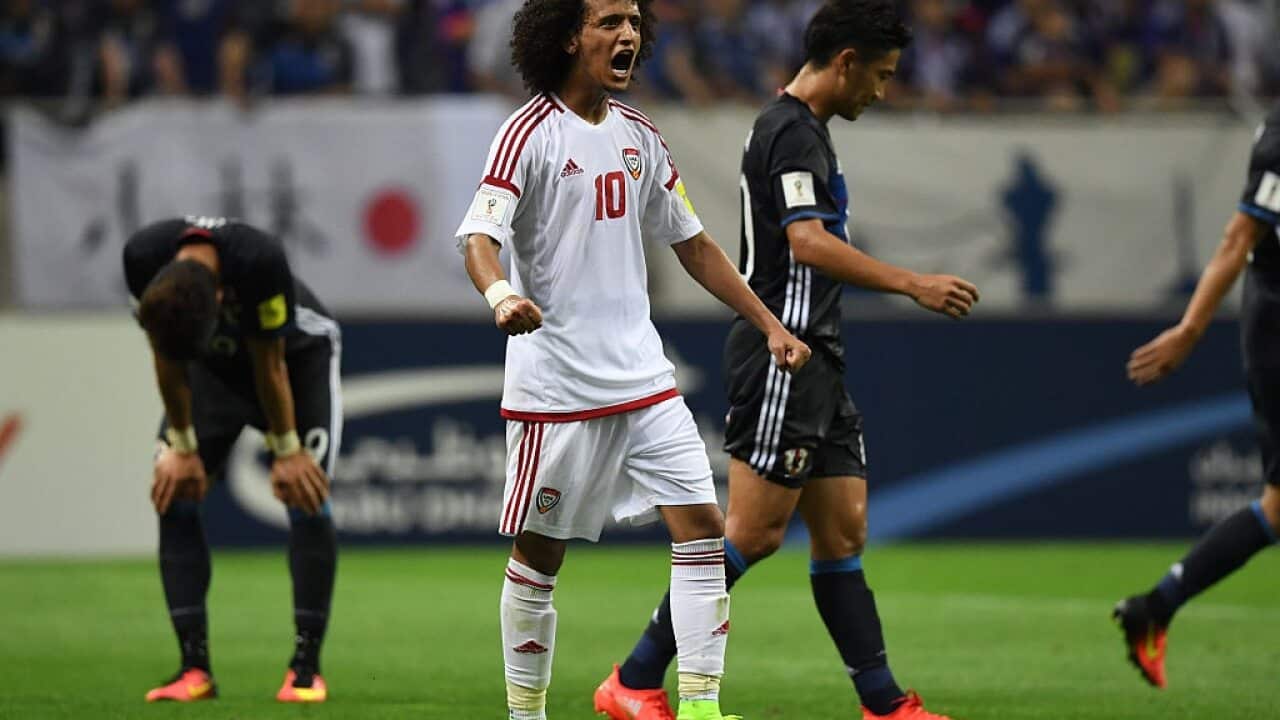 In Asia, where most players are barely known outside their domestic sphere, it’s even more rare. But there is one such player who has that effect and the mere mention of his name instantly brings a sense of joy and excitement.

He is Omar Abdulrahman.

“In my opinion he can play in any league in Europe,” he told The National earlier this year. “Even as the coach of the opponent, I enjoy watching him play. He has so many touches; everything he does when he gets the ball alerts the whole stadium because you can expect something good is coming up. He’s a fantastic player.”

In Australia there will be thousands of people waking up in the early hours of Wednesday morning hoping to see the Socceroos make it two wins from two games at the Mohammed Bin Zayed Stadium in Abu Dhabi, but they will doubtless be just that little bit excited about the prospect of watching Abdulrahman in full flight.

The 24-year-old mesmerised Australian fans at the AFC Asian Cup last year, but the man who gave him his senior debut for Al Ain in 2009 is convinced the best is yet to come.

“It depends on many factors, Asian football develops at the moment at an incredible speed and it will be a challenge, but I’m confident that he can become even better,” former Al Ain coach Winfried Schäfer told The World Game.

Schäfer, who also coached Thailand the last time they met Australia in qualifying for Brazil 2014, was coach of Al Ain from 2007 to 2009 and spotted Abdulrahman playing for the club’s youth academy, and had no hesitation in fast-tracking him to the senior team at just 17 years of age.

“Omar was, and is, one of these very valuable players who combines an incredible talent, esprit and nonchalance,” the 66-year-old German said.

“He loves to play football, of course he also loves to win and he is professional, but his nonchalant lust for the game gives him an advantage that only the outstanding players have.”

If things had worked out differently when Abdulrahman was younger, he could be facing Australia wearing the green of Saudi Arabia rather than the white of UAE during this qualifying campaign.

Born in Riyadh to a family of Yemeni migrants, he was first spotted by Saudi giants Al Hilal. But the Saudi club only offered citizenship to Omar, and not the rest of his family, an offer he quickly rejected.

Ironically, it was Al Hilal legend Sami Al Jaber, who was working as a scout for Al Ain in Saudi Arabia, who helped orchestrate the move to Al Ain after learning of his situation.

The Emirati club offered citizenship to Abdulrahman’s entire family, which included older brothers Khaled and Mohammed who now also play for Al Ain, and the rest is history.

“He is a very friendly and family-oriented person,” Schäfer explained. “He loves the Emirates, (and) he loves Al Ain.”

“Maybe that’s one of the reasons why he isn’t pushing for a transfer to Europe and you know what? I understand that, and in my opinion it isn’t a bad reason at all.”

Speculation linking Abdulrahman with a move to Europe seems to come around almost every transfer window. After his standout performances at the London Olympics in 2012 he was offered a two-week trial with Manchester City, but a deal never eventuated.

Nevertheless, he left a lasting impression in Manchester with Yaya Toure admitting he was “a big fan of Omar Abdulrahman” and that he was “very disappointed in him not signing with us.”

Speculation most recently linked him with a move to Spanish side Espanyol, now coached by Quique Sánchez Flores who coached Abdulrahman for six months at Al Ain in 2013-2014, but once again nothing concrete eventuated.

There is almost a desperation by some for Abdulrahman to move, eager for the Emirati star to produce on the biggest stage and justify the hype that surrounds him in this part of the world.

Schäfer can see both sides of the argument.

“I understand that many people can’t understand why he didn’t (move), but on the other side maybe he is simple happy where he is now,” he said.

“Of course it would help him to improve, to seek the challenge of the European competition, but it’s also a risk. It’s unlikely that he would play right away at one of the top European clubs, so it would need a lot of planning, a very good agent, and of course the right environment with a good coach and some patience.”

Former Barcelona legend Xavi, now with Qatari side Al Sadd, is another who wants to see Abdulrahman test himself in Europe, saying it will be good in the long run for Emirati football.

“(He’s) a very good player, a very good talent, he’s got a good left foot,” he said. “It’s possible for him to play his future in Europe. He is of a high level.”

“It is important for him [Abdulrahman], for Arab players, for the country also. In the future, to be a competitive country, yes it’s good for them.”

“It (the UAE) is a very good level, the technical level is very high. It is physical also. The difference with Europe is tactical. The teams in Europe work more in tactical training than here.”

Abdulrahman stoked transfer speculation in June, but not for a move to Europe, but a move back to Saudi Arabia with Al Hilal.

When asked about a move to the 13-time Saudi league champions, Abdulrahman replied: "Why not? It's an honour wearing Al-Hilal colours for any Arab player."

Of course this is not the first time Australia will face Abdulrahman, with their biggest meeting coming in the semi final of the AFC Asian Cup in Newcastle last year.

Socceroos defender Trent Sainsbury raised a few eyebrows before that match by suggesting Abdulrahman was lazy.

“Very tidy on the ball, not the hardest worker and I think we can exploit that,” was his assessment of Abdulrahman.

“He has just got that arrogance about him. He has got the cheekiness to chuck in a nutmeg here and there and he's a very quick thinker on the ball.

"So if we can counteract that and get in his face and not let him get his head up, hopefully we can stop him.

"If we can keep him facing our goal, then he's not going to be able to face forward and play that killer ball. So to keep him playing backwards would be a good plan for us.”

No doubt the plan has changed little – limit the amount of time he has on the ball, and be quick to close him down.

READ MORE
Socceroos' diamond is rough around the edges

That will be easier said than done, however, in the expected stifling heat of Abu Dhabi, where the temperature is expected to hit 43C on Tuesday, which will likely result in a slower paced game and more time on the ball - perfect conditions for an Abdulrahman masterclass.

Whatever the result, sit back and enjoy.