With the recent international fixtures out of the way, the countdown is now on towards the FIFA Confederations Cup, where Australia will close their group programme with a game in Moscow against Chile. 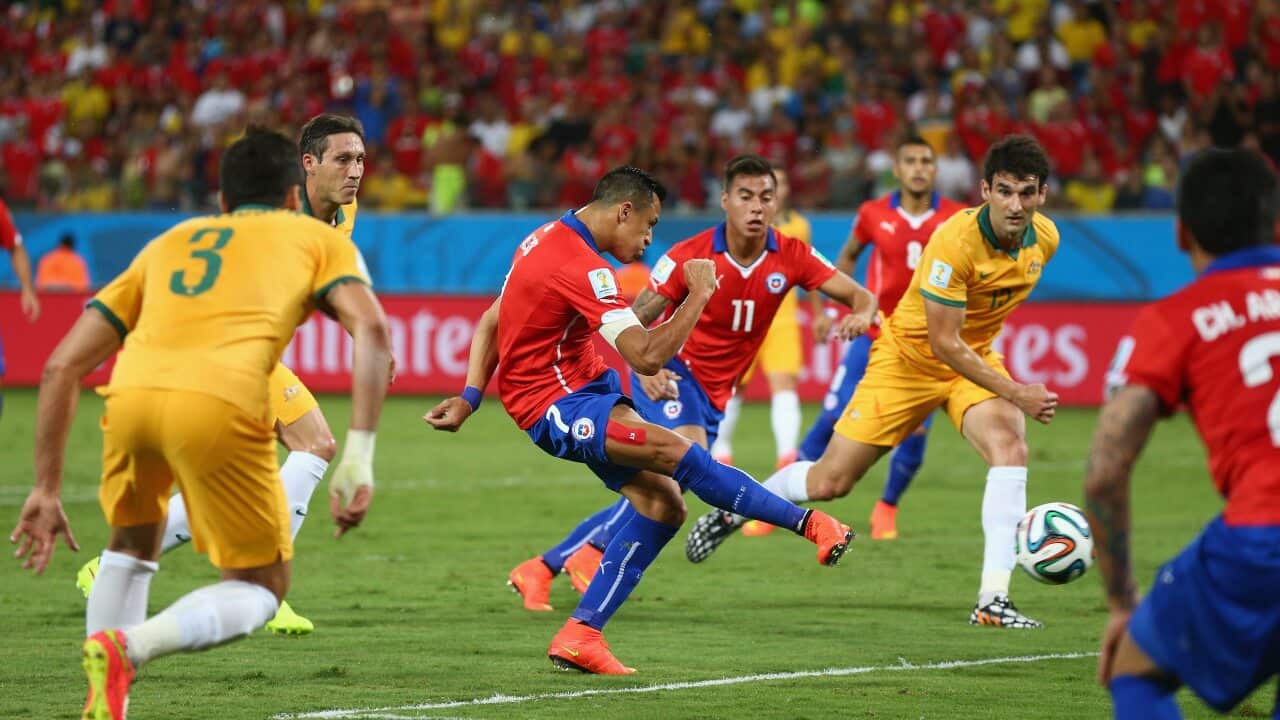 Chile were of course the side the Socceroos opened their 2014 World Cup campaign against in Cuiaba, Brazil.

It is striking to look at the Chile line up for that game and notice how little has changed.

The side that won that thrilling, hard fought 3-1 win over the Socceroos is uncannily similar to the team that beat Venezuela by the same scoreline in the most recent World Cup qualifier.

Advertisement
Captain Claudio Bravo remains in goal. Mauricio Isla is at right back, with Gary Medel and Gonzalo Jara in the middle – a duo whose lack of height was exploited by Tim Cahill just as it was at the end of last month by Venezuela’s big centre forward Salomon Rondon.

There has been a change of order at left back, where Eugenio Mena started against Australia with Jean Beausejour on the bench – he came on to score the clinching goal at the end of the game. The roles have now been reversed, with Beausejour in the team and Mena a substitute.

The midfield trio against Australia were Charles Aranguiz and Arturo Vidal protected by Marcelo Diaz – and only the injury to Diaz prevented him from figuring against the Venezuelans, where he was replaced by Pablo Hernandez, who just missed out on a place in the World Cup squad.

And the attacking trident which did such damage to the Socceroos defence was made up of Alexis Sanchez and Eduardo Vargas, with Jorge Valdivia floating just behind. Against the Venezuelans Valdivia was introduced after the hour, replacing Esteban Paredes, an out and out centre forward, who went to the World Cup without getting a game.

An extraordinary 19 members of Chile’s 2014 squad were called up for the recent qualifiers – and it would have been 20 had Diaz been fit.

On the one hand, then, almost nothing has changed in three years. But on the other, things are now very different.

The coach is not the same. Jorge Sampaoli, the high profile, flamboyant little Argentine resigned in controversial circumstances at the start of last year. He has subsequently moved on to Sevilla, and is currently being linked to Barcelona and the Argentine national team.

Sampaoli is a bold tactician, a risk taker who likes to work with different systems. Against Australia, for example, his team lined up in a 4-3-3. For the subsequent games in that World Cup he made the switch to a back three, seeking to gain more presence in the middle of the field. The aim was the same, though. Sampaoli’s Chile threw men forward, relentlessly pressing the opposition, hoping to create two against one situations down the flanks and suffocating the other team in its half of the field. In the early minutes of that meeting in Cuiaba three years ago the Australian defence was undone by the sheer number of Chileans popping up in the penalty box.

New coach Juan Antonio Pizzi is another Argentine albeit one who ended up playing his international football for Spain. He is a more conventional figure. He does not depart from a back four, and, a centre forward in his playing days, he is more inclined to use a penalty area specialist. His Chile are less revolutionary than under Sampaoli, but he has retained much of his predecessor’s model. He is also in charge of a team that can now boast some serious silverware.

Chile showed some nerves in that 2014 match against Australia, which is hardly surprising. They had gone to the 2010 World Cup as an exciting young side, and now, four years more experienced, they were expected to produce. With Spain and Holland also in the group, the match against Australia was seen as the must-win fixture. Winning it gave them the confidence to go on and eliminate the Spaniards in the next match.

Three years down the line, those same Chilean players have no need of an inferiority complex.

In 2015, on home ground, they ended a 99-year wait for a trophy, at last winning the Copa America. A year later, they did it again. An extra, centenary Copa was organised in the United States, and Chile, by now under the command of Pizzi, won that one, too. This must surely go down as the greatest moment in the country’s footballing history. Home advantage counts for much in South America, so to repeat the 2015 triumph in a foreign country is all the more impressive.

Furthermore, the semi final – an astonishing 7-0 demolition of Mexico – must be seen as the team’s best-ever game.

This, of course, raises an age old question; if climbing the mountain is tough, how much harder can it be to stay at the top?

Is down now the only way the Chileans can go?

The fact that the 2014 World Cup squad is still intact points to one problem – a lack of renovation.

This is a side that is beginning to grow old together. And the Confederations Cup means that this is their fourth consecutive year with a (European) summer tournament, and a consequent lack of a complete break between club seasons.

The real disaster, though, will take place if there is not a fifth consecutive year without a summer break – because that will mean that Chile have failed to qualify for the 2018 World Cup. A place in Russia next June is no foregone conclusion.

They currently lie fourth – the last automatic qualification slot. But the remaining four games are not easy, and ageing legs might find it harder to protect a suspect defensive unit. There is even the prospect of losing two points (a 0-0 draw with Bolivia was later awarded to the Chileans as a 3-0 win after their opponents fielded an ineligible player, but Bolivia are appealing to the Court of Arbitration for Sport) which would drop Chile down to fifth, the play off position.

The worst case scenario for the Chileans, then, is that the game against Australia on June 25th might mark the last tournament match played by this, the country’s golden generation.