Winners and losers from EURO 2016

A concentration of Football can have huge effects on the value of players, coaches, fans and even ideas. Nick Stoll runs through the winners and losers, whose value went up and whose went down. 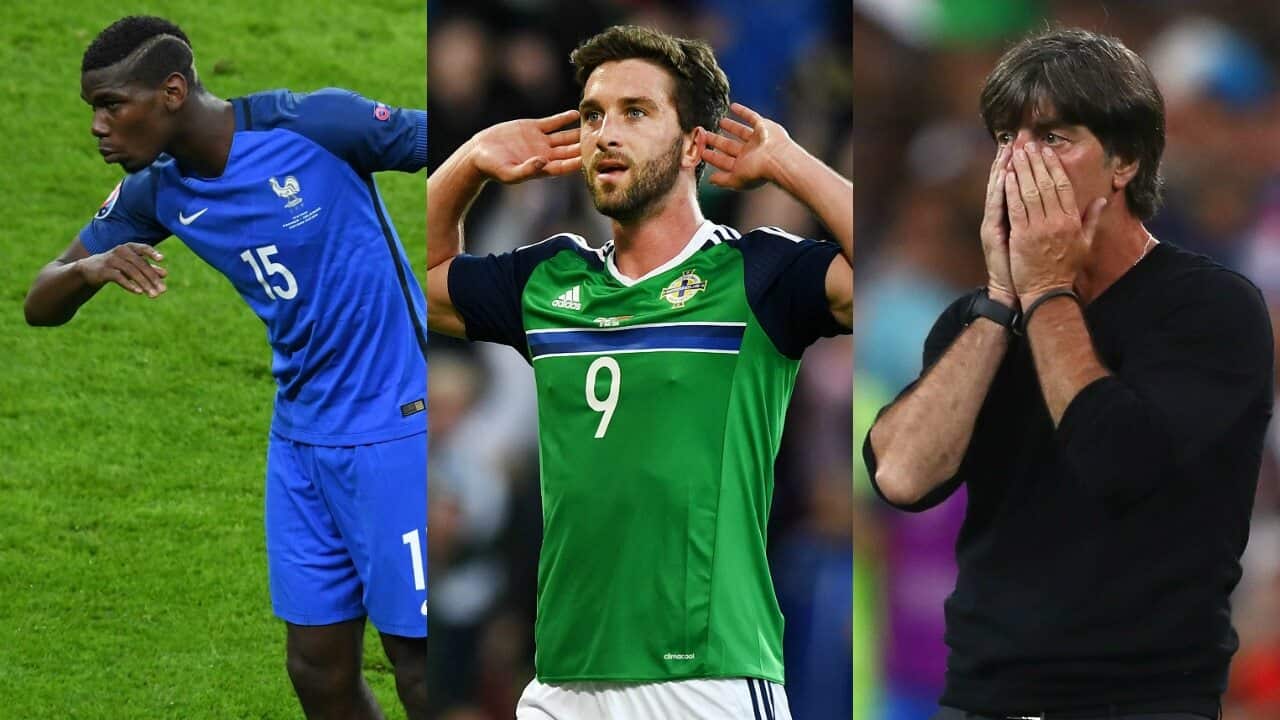 Advertisement
Prior to this tournament, Bayern Munich snapped up the 18 year-old from Benfica for 35 million Euros ($51M). Some raised eyebrows at such a price for someone who has only played 35 first team matches, but now it looks like a bargain.

Young player of the tournament, the youngest European champion and the potential to become the dominant central midfielder of the next 15 years.

Manchester United were also interested but hesitated at the price. Now they're reportedly offering 125 million euros ($182M) for another central-midfielder in Paul Pogba.

A year ago, Manchester City paid 49 million Pounds ($85M) for the English winger, now he's become one of the scapegoats for England's disastrous tournament.

His contribution to England was summed up by this miss against Wales:

And social media has been savage:

Pep Guardiola faces a huge task to turn around the youngster's fortune this season with Manchester City.

Player of the tournament, six goals, three assists and now a contender for the Ballon d'Or. He could be the first person in 10 years to win it that isn't Cristiano Ronaldo or Lionel Messi.

"After losing 2-1 to Iceland, Joe Hart punched the air in frustration...and missed."

These were the kind of jokes that were flying around after England's early exit.

Rumours are flying that he could lose his place as City's number 1 should they bring in Marc Ter-Stergen from Barcelona.

The striker didn't even play a second at EURO 2016 and yet he might be the most memorable thing about it.

'Will Grigg's on Fire' started out as this:

And it has now become this:

In terms of name recognition, there can be no doubt Will Grigg has been most improved. He still has two years remaining on his contract at Wigan but who doesn't want Will Grigg in their side - not to play, but for the atmosphere it generates.

Pedro joined Chelsea last year in a 20 million Pound move ($35M). 8 goals and 3 assists later it doesn't look like the best piece of business for the London based club.

For some it was a surprise he was even selected in Spain's squad. Not for Pedro, evidently:

Good luck with new Chelsea boss Antonio Conte. Pedro seems to be on a steep descent.

The number 10 in UEFA's team of the tournament.

The Arsenal midfielder was at the heart of Wales' run to the semi-final and his absence due to suspension against Portugal was telling. Contracted until 2018, Arsenal are no guarantees to hold on to the 25 year-old as interest from some of Europe's biggest clubs grows.

Zaza is not a big name player, and almost certainly will be forever associated with that penalty.

In 2016 the internet takes no prisoners.

What makes it worse is that he was brought on in the very last minute of extra-time specifically to take a penalty.

Rumours are he's already on his way out of Juventus. Almost have to feel sorry for the guy.

It wasn't pretty, but the trophy he just won certainly was. A European champion and now, no doubt, being pursued by national teams and clubs all around the world.

Or maybe he'll retire on top and become a poet:

Wilmots had one of the most talented sides at the tournament and was placed in the easier side of the draw. But from the opening match against Italy - a 2-0 defeat - it became clear he was out of his depth.

The 3-1 to defeat to Wales the final nail in his coffin.

Now being compared to him is the ultimate insult to a coach.

Reportedly, the only reason he hasn't been fired yet is the ensuing pay-out.

For many, the coach of the tournament. He took, what was described per-tournament as the worst Italy side in 50 years, to the quarter-finals where they were knocked out by Germany on penalties.

READ MORE
'Worst ever' Italy team not that bad after all

Implementing a supremely organized 3-5-2 he knocked out holders Spain and cemented his place as one of the best coaches going around.

Chelsea fans, who will be very thankful they had secured him before the tournament started, have cause to smile.

Roy Hodgson's England career can be summed up in one very famous Vine.


Culminating in a humiliating loss to Iceland in the second round, Roy Hodgson resigned almost immediately after the match.

There are very few guarantees in football but Roy Hodgson will never again earn $6million to coach again.

By helping take Iceland to the quarter-finals he can certainly claim to have put more smiles on the faces of his people than any other dentist. Should be good for business, if he can squeeze it in.

The only coach in history to win the Champions League, the European Championships and the World Cup. But like a boxer who didn't know when to retire, Del Bosque is now considered past his use-by date.

After a disappointing World Cup in Brazil, Del Bosque was tactically out-classed by Conte as Italy knocked out Spain.

Almost forgotten about since his days in the Premier League with Fulham, Chris Coleman took Wales - a side that many considered lucky to be there - all the way to the semi-finals.

World Champion - sure. But what was with the sniffing?!?


He still might be a great coach, but not to many people are going to want to offer him new contracts if it means having to shake hands on a regular basis.

SCENES! Often times there was more highlights off the field then there was on the field. 'Will Grigg's on Fire' and 'The Icelandic Clap' could be to EURO 2016 what the Mexican wave was to Mexico '86.

Obviously not all Russian fans should be tarnished by the action of a section, but no one will want to go to a game involving the hosts at the 2018 World Cup after scenes like these:

Portugal were only able to win one match in 90 minutes during the tournament, as they implemented an extremely organized and defensive strategy.

It was just a few years ago that Spain and Barcelona were dominating everyone with attacking, short-passing, possession football.

Now the success of Leicester, Atletico Madrid and Portugal could inspire more teams and nations to take a defensive approach.

Paul Pogba was set to take this tournament by storm, with every goal and victory punctuated by his signature move, 'The Dab'.

While Pogba still seems like one of the coolest cats in the game his signature move surely took a hit.