For months, dozens of senior people of "east Asian" appearance have been queueing up for food hampers in Sydney’s west but with the main food supplier reducing supply, the charity’s project leader says he’s been forced to “refocus” on supporting only rough sleepers. 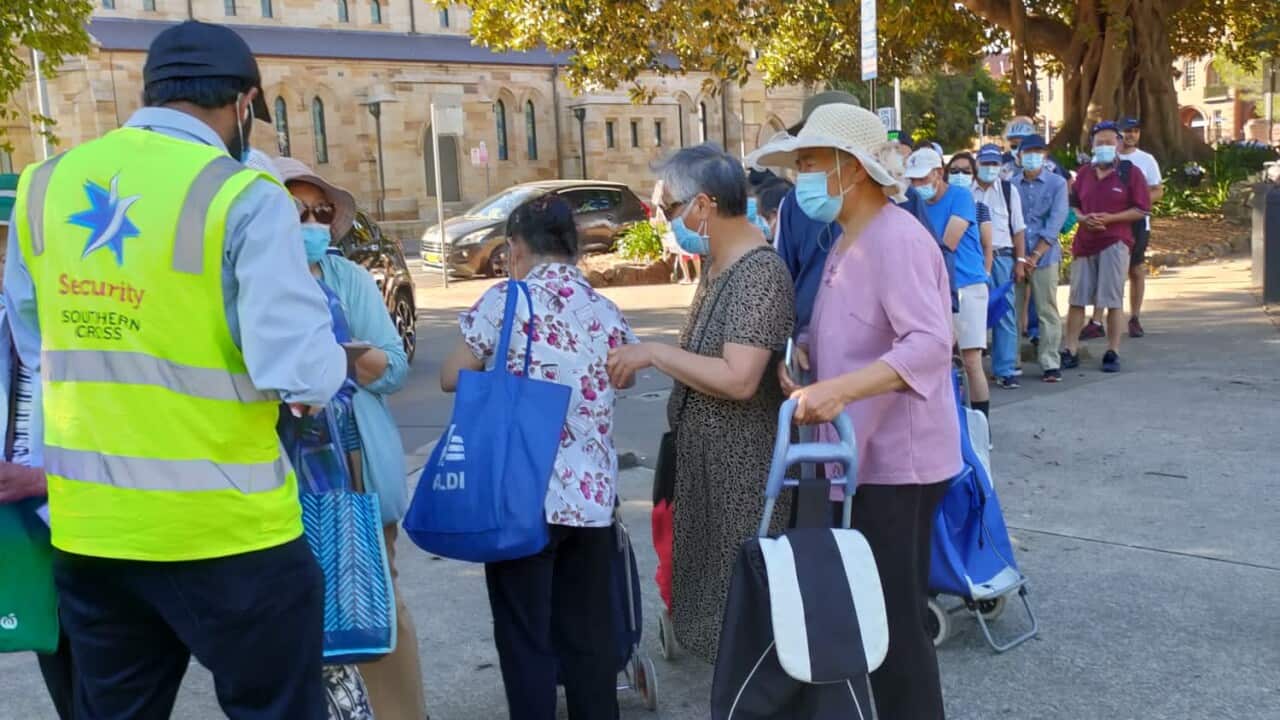 Sanjay Kumarasingham is a volunteer at the Westmead Sai Centre in Sydney’s west that distributes free food packages to the homeless.

Mr Kumarasingham said there had been dozens of “east Asian-looking” elderly people queuing up every Tuesday for free food, but he had not been able to verify their identities or residential statuses due to language barriers.

“We provide free food for those in need, mainly rough sleepers. These food hampers are basically bags of non-perishable items, that we give away,” he said.

Advertisement
“Our assumption was they would understand it [food packages are for homeless people] because they queue up right next to rough sleepers. And rough sleepers are generally people who can be [easily] distinguished, because they live on the streets.”

He added the individuals in the queue appeared “very old” and “decently dressed but you can’t judge a book by its cover”.

“It’s very hard to determine whether they are sleeping rough but you have to also understand that there could be other financial pressures that the elderly sometimes go through,” he said.

“Unsustainable” to help everyone who queue up for hampers

Mr Kumarasingham said Sai Centre’s mission was to help anyone in need, regardless of who they were or where they lived.

“Our ultimate aim is to love all and serve all. Regardless of who you are, if you are in need and if we can help, we will help,” he told
SBS Chinese
.

Until recently, Sai Centre’s main food sponsor, OzHarvest, had been reducing the food hampers provided to them, prompting Mr Kumarasingham to “refocus” on the homeless in offering food hampers.

“The problem is the charity who sponsors our work, OzHarvest, which also [receives funding from] the government, has been reducing the number of food hampers that are readily available,” he said.

“This has meant we had to focus more on the rough sleepers, who need ready-made food.”

A spokesperson for OzHarvest told SBS Chinese that due to relevant funding and resources coming to an end, the organisation had had to scale down its food hampers’ project across the country.

“A few months ago, we sent letters to our partner charities notifying them of the changes. There is no connection to the people that the Sai Centre were serving and the reduction in hampers from OzHarvest,” the spokesperson said.

She added the reduction in food supplied to charities was due to general funding issues instead of food supply and cost of living pressures experienced in recent months by the wider society.

For months, dozens of “decently dressed” senior Asians have been queueing up for food hampers in Sydney’s west. Source: Provided by Sanjay Kumarasingham

“Each of these bags of non-perishable items [costs] about $20 to $25, and if you multiply that by 65, that’s well over a thousand dollars a week. This is unsustainable.”

Language barriers had proven to be a major difficulty in understanding the needs of those queueing up each week, Mr Kumarasingham said.

“Those people who line up don’t seem to speak any English, so communication was a very big barrier. And I have written to five different Asian organisations asking for a translator, but I have had no luck – not even a phone call back,” he said.

“I was concerned that maybe they’re people in need, but without anyone that can help us to understand them, we have not been able to establish the reason why they actually come.”

However, the number of people queuing up for food hampers had since been significantly reduced in late-May after a Chinese-language notice was distributed among the seniors, emphasising the project was targeted at the homeless.

Michelle Li, a GP friend of Mr Kumarasingham, volunteered to translate the notice from English, requiring those queuing up for food to provide their personal details.

“I was surprised when Sanjay told me there had been an increase [number of seniors], particularly with Chinese backgrounds taking the food,” Dr Li told SBS Chinese.

“OzHarvest normally only budgets for around 20 to 30 people with their food hampers [provided to Sai Centre]. They were not able to accommodate that great volume of demand.”

Dr Li said those deemed ineligible were then given a smaller package of food and were told that the food hampers were in fact reserved for rough sleepers only.

“We want to make sure that these people are genuinely in need of the food, and understand the genuine purpose of this project,” she said.

“Sanjay is a very devoted person in helping those in need, and he genuinely doesn’t want to reject people.”

The notice helped ease the food supply pressure on Sai Centre, but Mr Kumarasingham said he was still determined to understand what the seniors needed and what could be done to help them.

“Because I was quite concerned with the high number and I was thinking there’s some thing of a breakdown in the society of a particular ethnic group. I haven’t solved the reason why they come,” Mr Kumarasingham said.

Food hampers given to those in “genuine need”

It was not until a SBS journalist visited the site and acted as an interpreter that Mr Kumarasingham was able to finally understand the difficulties faced by some of the elderly persons who queued up.

“One or two people who came, through your translation, expressed the reasons they queued for food was due to high rental pressures and the inability to find other sources of income. So that’s like a genuine need, and we did give them food,” he said.

“So, we won’t say ‘no’, but our preference is to refer them to agencies that can handle the numbers.

“What we don’t want to see is people who are affluent, people who have other sources of income, coming and lining up, thinking it’s just available for free. We want to identify the real, needy people, and continue to support them.”

The number of people queuing up for food hampers had since been significantly reduced in late-May after a Chinese-language notice was distributed. Source: SBS Cantonese/Ivan Leung

When approached by the journalist, most of the elderly declined to be interviewed, but emphasised they would not insist when refused a food hamper.

Some also said they were “living nearby” but were not able to produce any proof of identification or concession card numbers.

Mr Kumarasingham said it would be better if there was a system in place to record the details of the beneficiaries of the project.

“What ideally should happen is that we know who these people are – we should register them, and then we can continue to provide through the charity,” he said.

READ MORE
‘Too embarrassed to tell the children’: The older Chinese women who 'depend' on soup kitchens to get by
No jail for man who assaulted photographer at viral anti-Communist protest
Will Chinatowns in Melbourne and Sydney make a comeback after big-name closures?