Bilal Khan was on his way to deliver food when he was hit by a car on an intersection in Sydney. He was out of work for three weeks due to physical injuries and says the accident still haunts him.

“It was just another food-delivery,” says Bilal Khan, an engineer who came to Australia for a better future on a work visa.

He says that food-delivery is one of the easiest jobs to get in the gig economy that provides money to meet your ends.

“I was looking for professional work as I am an engineer, but jobs such as food-delivery is a fast way to earn money to pay your bills.”

Bilal was passing by an intersection when a car from the opposite lane tried to turn right instead of waiting for him to pass.

“I was in my lane and saw the car, but instead of stopping the driver continued turning right and just hit me.

I can never forget the shock my life flashed before my eyes. As I laid on the street, I thought my life was over; I almost got killed that day. 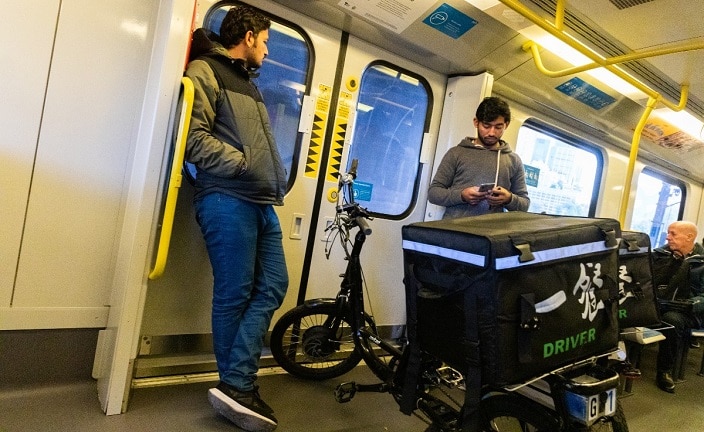 Food deliver bike riders on the train with their bicycles on May 13, 2020 in Melbourne, Australia.
Asanka Ratnayake/Getty Images

Bilal was taken to a local hospital in an ambulance where he remained in intensive care for a day. He did not suffer any major injury but several bruises and cuts on the body made him unable to carry out any work for the next three weeks. The ride-sharing company that Bilal worked for paid him compensation for the days he became unable to perform work.

For Bilal, it was the last day of delivering food. The mental stress from the accident made him decide to move to retail work.

“I am away from home to make a better living in Australia, doing odds jobs and then I was hit with this, literally.

The physical injuries take a toll and you recover from them but mental stress does not leave you. Is men’s mental health still a taboo topic in the South Asian community?

The former food delivery rider says the pressures of delivering food "on-time" and to get "as many deliveries as possible" in minimum time, cause food riders to end up with fatigue and stress.

"Food delivery work is all about getting as many deliveries as possible in minimum time, so one has to drive as fast as possible within rules to get those deliveries."

Bilal says he is extremely saddened to hear about the recent deaths of food delivery riders and he feels lucky to be alive.

“Every time I see a food-delivery rider, I feel he might end up as I did, on the street.”

The New South Wales government has now set up a task force to investigate the recent spate of deaths.

The probe will be led by SafeWork and Transport NSW that will look at whether recent deaths in the state were caused due to “avoidable risks”.

Listen to the full interview of Bilal Khan with SBS Urdu by clicking the speaker on the main image.

Follow SBS Urdu on Facebook and listen to the radio program on Wednesdays and Sundays at 6 pm AEDT.