The Evo Championship Series is an annual e-sports event that is focused on fighting games. The series has been going on for the last 23 years.

The line-up consisted of games such as Street Fighter, Blaz Blue, Tekken 7 and more.

This was the first time that the status quo was challenged when an unknown player from the streets of Lahore, Pakistan, arrived at the tournament just an hour before the start time, hungry, thirsty, sleepless and ready for blood.

Defying all odds Arslan Ash left fellow gamers, spectators, fans and organisers all in surprise when he became the first Pakistani to win the Evo Championship tournament for his excellent performance in Tekken 7 against competing opponents.

When called on stage to receive the prize Arslan is asked by the MC “How is it winning such a close match in Japan?” to which he replies “I’m feeling like on top of the world” followed by cheers from the crowd.

Recalling his on-stage moments, Arslan told SBS Urdu that he still cannot believe that he won.

“Now when I look back, it's still hard to believe how I achieved such a feat, but on further thought, I did which gives me great pride and joy,” said Arslan.

The happiness I am going through can't be explained in words.This win will be the most cherished moment in my life as me walking into the land of big names of Tekken and reigning champ @ EVO JP 2019 cannot get bigger than this pic.twitter.com/uw1C5vVQus

Arslan hails from Lahore, Pakistan. He is only 23 years old and has been gaming since he was 13. He used to sneak out of the house with spare changes to go to arcades and play games.

This is when Arslan was first introduced to Tekken. Talking to SBS Urdu he said that the game always attracted a large crowd which intrigued him to check it out.

“My favourite Tekken characters are Jinn and Leo,” said Arslan.

“I really like Kazumi’s style though. She is probably the best poker in the game.

“In poking style of gaming you make small and quick attacks to annoy and disturb your opponent.” he further added. Arslan’s journey for winning the Evo Japan Championship started many years before 2019. He had been practising and playing the game in Pakistan since 2009.

He always believed that he could make gaming into a lifetime career.

Arslan told SBS Urdu that he used to win almost all tournaments all over Pakistan.

“I used to think if I can win the local tournaments than I must be good. This motivated me to take a chance and apply for international tournaments.

“Because of winning so much from the start I always believed I could make gaming into a lifetime career,” said Arslan.

From the very start when Arslan decided to take part in Evo Championship he came across many hurdles.

The first hurdle he faced was when he went in person to apply for a visa at the Japanese consulate in Islamabad. His application was handed back to him and he was told to provide an invitation letter from the country to be eligible to apply.

He applied for the letter through his sponsor and waited for three days at a friend’s house in Islamabad. With no sign of the invitation letter, Arslan decided to head back to Lahore. While he was at the local bus stop he found out the letter had arrived.

"Today I went to Japan embassy and they refused to accept my application for visa.

They said that I need an invitation letter from Japan. Can anyone help??@EvoJPN @hameko

Within a week he was granted the visa, excited and ready to head to Japan for the tournament.

Arslan arrived at the airport and found out that he would not be allowed to board his first leg of the trip to Thailand. He had a 21-hour transit in Thailand.

Arslan told SBS Urdu that Pakistani passport holders need a transit visa if they plan to stay more than 12 hours in Thailand.

“I was not allowed to board the plane and this ticket was wasted. Arslan then got his sponsor to book another route which involved travelling from Pakistan to Malaysia, Korea and then Japan,” explained Arslan.

“I finally boarded the plane and reached Malaysia. After completing my transit I headed to the counter to board my plane for Korea where I was once again not allowed to board the plane.

“According to my itinerary, the airline carrier was changing once I would have reached Korea. This meant that I would have to cross immigration in Korea. Because of this, I was told that I will not be allowed to travel to Korea without a visa.” he further added. Arslan was stuck in Malaysia now trying to figure out the next step to overcome this hurdle and reach the tournament in time.

He then booked a direct flight from Malaysia to Japan for which he already had an approved visa.

It took Arslan a total of 2 days to reach Japan.

Arriving at Haneda airport in Japan Arslan realized that all the currency he had was Pakistani rupees and no exchange would accept it. Hungry and tired he tried his luck at the food court to but no one would accept the Pakistani currency.

His next flight was from Narita airport an hour away by public transport. To travel he needed to buy a ticket but did not possess any local currency.

My parents never thought I could make this into a career, but they are very proud of me and I am very happy.

While recalling this time of hardship Arslan said that I did not even have an atm or visa card at the time.

“I did not know how to buy the ticket and due to this delay I ended up missing my domestic flight to reach Fukuoka where the tournament was going to be held,” said Arslan.

“At this time I thought what was the point of coming this far, maybe I should have gone back from Malaysia or not have left Pakistan.

“The tournament was four hours from now. In a state of desperation, I went to the local helpdesk and explained my situation.

“They told me that I was in luck as a flight was leaving at 6 am which would reach Fukuoka at 8 am. The tournament start time was at 9 am.” he further added.

The sponsor paid for the new ticket over the phone and Arslan arrived at Fukuoka airport. He then took a taxi on the condition that he would pay once arriving at the tournament.

Arslan arrived just minutes before the start of the tournament where his sponsor was waiting who paid for the taxi. Pakistani weightlifter 'turned away' at home, wins gold in Australia

Finally, his dream of participating in the Evo Championship tournament was coming together.

“I was extremely tired. I knew if I relaxed for a bit I would fall asleep instantly. My sponsor got me some food and I was ready to fight.” said Arslan.

The tournament started and Arslan won a few matches. This caught the attention of the people attending and his games started being live-streamed online.

“I was doing well and beat Knee one of my most difficult opponents with quite an ease.

“I then lost the next match. You have two chances during the tournament to lose and make a comeback.

“This loss gave me a break and I slept for 5 hours. This gave me the opportunity to energise myself and get ready for the fight to come.”

Arslan then went on a winning streak winning 9 matches in a row to become the Evo Japan Champion 2019.

Watch the Grand Final match from Evo Japan 2019 below:

He became the first Pakistani to participate and win the Evo tournament.

“My parents never thought I could make this into a career, but they are very proud of me and I am very happy.

I plan to keep participating in bigger tournaments and winning more championships around the world.

Pakistani gamers have a lot to offer and are one of the best players in the world.” said Arslan.

Arslan is currently in the US and has won the Evo Championship held in Las Vegas over the weekend securing first place out of 100+ participants in the Tekken Dojo event.

All thanks to Allah Almighty for making me gain success and be an evo champ.Twice consecutively.
Along with this I am much obliged to have my mom, @vslash and @Zantetsu_UAE As my shoulder! @sherryjenix for her awesome program !my friends and loved ones for being their for me. pic.twitter.com/OAwcMvwL2v

This #EVO2019 weekend has definitely been busy! We just want to congratulate the top 3 players of our 100+ entrants Tekken 7 Dojo event this past Thursday!

And thanks to all who came out and made the event great! 😁 pic.twitter.com/DxS9L1rbaj

Junko Howe, SBS Japanese Producer and Talib Haider, SBS Urdu Producer for their ongoing contribution, sourcing of information and visuals for this story. Lady by the day, fighter by the night 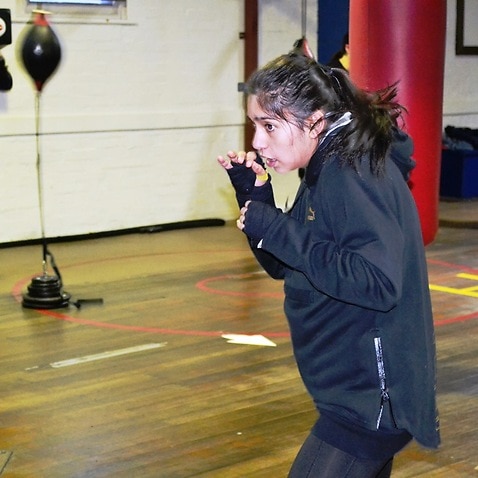