As Indian and Chinese soldiers remain locked in a two-month standoff over a border dispute in the Himalayas, some Chinese Australians decided to protest India in their flashy supercars on the India's Independence Day. 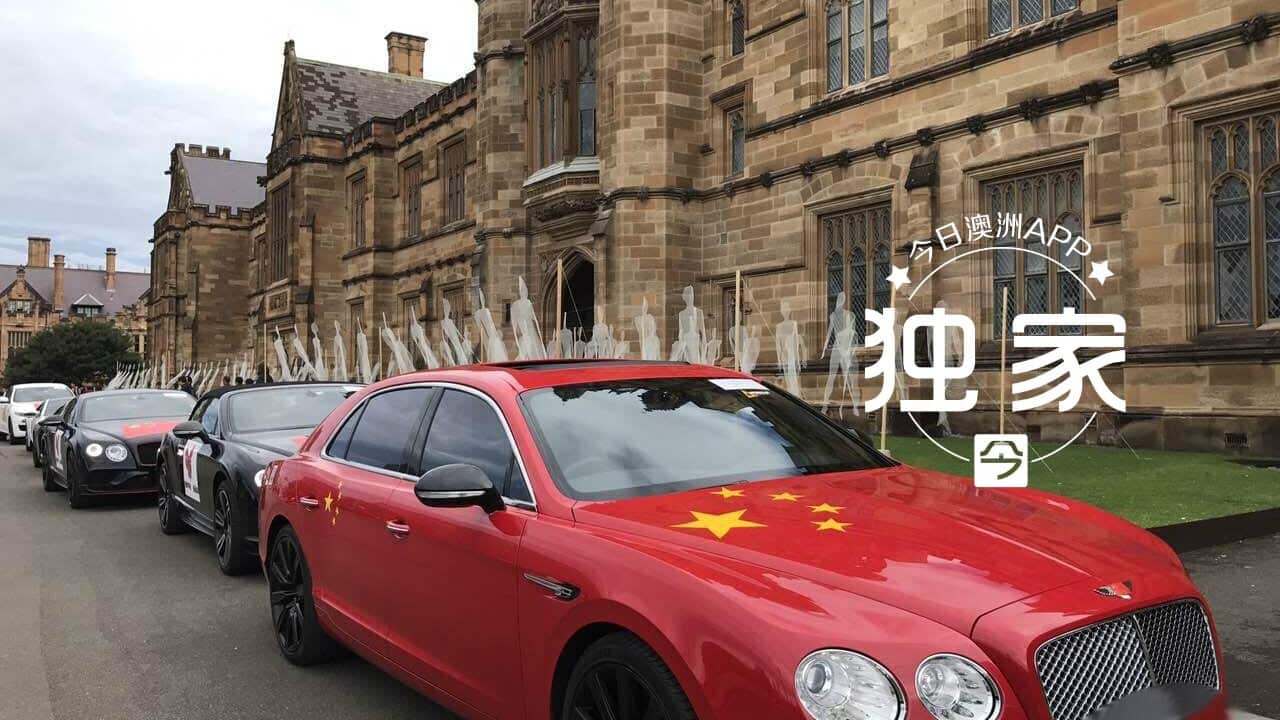 On Tuesday 15th August at around 12:40pm, a fleet of supercars, organized by a Sydney-based Australian Chinese automobile club, started their parade, led by a red Bentley covered by Chinese flag pattern.

Bentleys, Lamborghinis, BMW, AUDI and Maseratis were among the 10 luxury cars that joined the parade across Sydney, passing three universities including Sydney University, the University of New South Wales and the University of Technology Sydney. It comes not long after a spate of racist anti-Chinese graffiti and posters were identified in Universities across Australia.

Additionally, the cars continued their parade past some places of interest including Chinatown, Martin Place, Sydney Opera House, the Art Gallery of NSW, before arriving at their ultimate destination - the Consulate General of India in Sydney.
Supercars from the Australian Chinese automobile club, branded in Chinese flags line up at Sydney University to protest against India's ongoing border dispute Source: Sydney Today

The cars were decorated with the Chinese flag and stickers featuring slogans including: "Borderline is our baseline;" "China: Not even a bit can be left behind;" and, "Anyone who offends China will be killed no matter how far the target is."

"Anyone who offends China will be killed no matter how far the target is."

The latter is a hard-core tagline of a recent
Chinese patriotic action film
Wolf Warriors 2
.

The cars revved their engines loudly outside the Consulate General of India in Sydney, to protest against India over an
escalating military situation
between India and China, with both sides accusing the other of territorial intrusions.

The day they chose for the protests was of particular significance as Indian Australians around the country celebrated Independence day - marking the 70 anniversary of the handover from British rule.

"To demonstrate our determination to defense our sovereignty in a civilized way."

The organiser, who requested to remain anonymous, told local Chinese media outlet
Sydney Today
that the drivers voluntarily joined the demonstration, aiming to attract public attention to the meaning of the parade, not just to show off their cars.

The organiser said therefore that all the drivers chose to drive slowly and "strictly comply with road rules - with no horn, no speeding and not window-opening".

"To demonstrate our determination to defense our sovereignty in a civilized way," said the organizer.

"We are a group of hard working people and hope to contribute to the community. We are not those who got nothing to do but drive around. We hope people recognized our actions.”

However not everyone in the community agrees with the protest.

A comment left on Weibo, a Chinese social media platform, describes it as "pretentious behaviors by the rich second generation". Another comment condemns government's inaction, "why do we pay (tax) to have the army then? "

The news has also stirred up some discussion on SBS Punjabi's Facebook page.

Consulate General of India in Sydney told SBS Mandarin via phone that they were neither aware nor affected by the car protest as the Consulate was officially closed on the Independence Day.

Below - More on the Himalayan border dispute from SBS News: