For Harpreet Singh, community service is not just a task but a chance to set an example for the young generation and give back to the community.

The 2019 Citizen of the Year Awards were announced on Australia Day, celebrating and recognising the outstanding efforts of some Cardinia Shire community members.

Dr Harpreet Singh was named the 2019 Citizen of the Year for his continued active participation in local charity events and community service while creating awareness about Sikh faith and values.

Dr Singh said the rewards of volunteering and being involved in the community are enormous and he encourages everyone to play their part.

“It’s such a beautiful country. I feel lucky to be part of this community and this is my chance to give back to the people who have given me so much,” he said.

“My inspiration for social cohesion and integration with all communities comes from the Sikh prayer- ‘Nanak Naam Chardi Kala, Tairey Bhane Sarbat Da Bhala’ meaning pray for and work towards the common good of all.”

Dr Singh is probably the 1st Indian immigrant to have received this prestigious award in the Cardinia Shire Council. 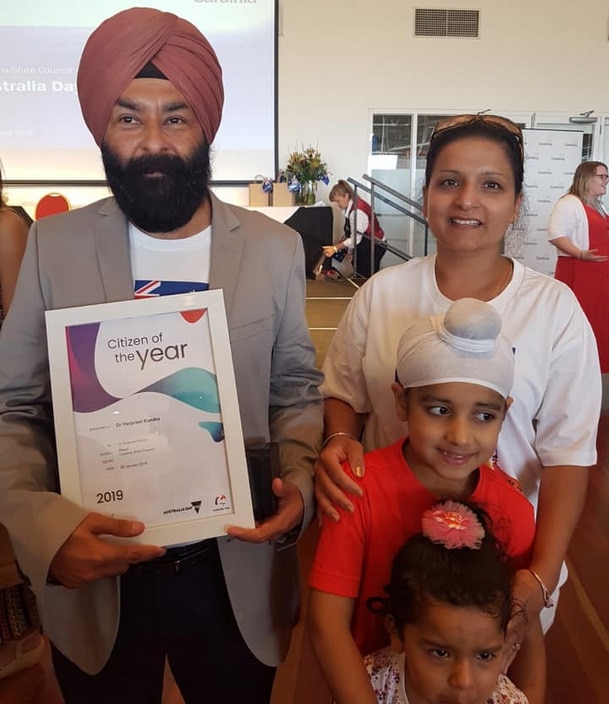 Dr Harpreet Singh with his family at the Australia Day Awards 2019.
Supplied

Dr Singh is a leader in the Sikh community and was the driving force behind the opening of the new Sikh temple (Gurdwara) in Officer in Melbourne’s South-eastern fringe.

He sourced grants and funding for the temple’s kitchen to prepare food for community events.

Dr Singh said the award was significant not just for him, but for multiculturalism in Australia.

“As Sikhs, we’re humbled to be part of this wonderful community,” he added.

“I always feel that the Sikh values are equal to the Australian values. This is the kind of message that we’re also trying to spread through to the wider Australian community.”

He is also involved in raising awareness and appreciation for Sikh food and culture in the wider community by organising stalls at shire events such as Harmony Day and Australia Day.

As an environmentalist, he firmly believes in Sikh prayer- 'Pavan guru paani pita, maata dhart mahat ...' implying Air is our teacher, Water our father, And the Great Earth our mother.'

Dr Singh also worked with Toomuc Valley Landcare and Lions Club to provide hay donations from the Sikh temple to the Need for Feed initiative. Dr Harpreet Singh is a lecturer of Water Engineering at the School of Engineering and IT at Federation University, Melbourne.
Supplied

Cardinia Shire Mayor Graeme Moore was full of praise for all of the winners and nominees. He thanked Dr Singh for his commitment and contributions to the local community.

“This year’s Citizen of the Year, Dr Harpreet Kandra was a driving force for the new Sikh temple in Officer, which fosters a sense of community and acceptance, and provides a safe space for personal and spiritual growth,” said Mr Moore. Hardev Singh Cheema, a committed volunteer from the Sikh community was another nominee for the ‘Citizen of the Year’ award.

Mr Singh was a volunteer and organiser of the 2018 Pakenham Jorh Mela, a community sporting event and festival that attracted around 5,000 people from across Australia.

As a member of Baba Budha Sahib Ji Gurudwara, Pakenham, he has been cooking and serving food at community gatherings for at least two days per week over the past four years. Outrage over 'dumping' of garbage on proposed site of Sikh temple 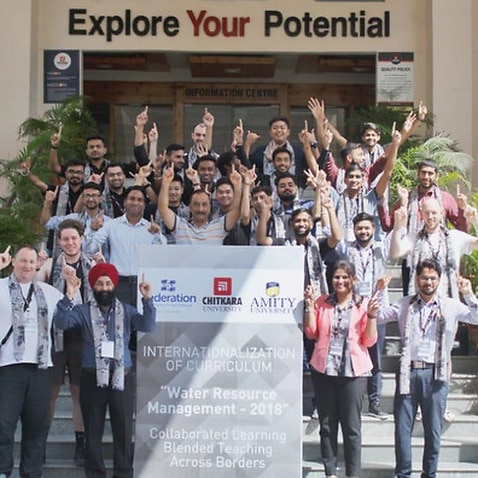 Australian students on a ‘rewarding’ educational trip to India