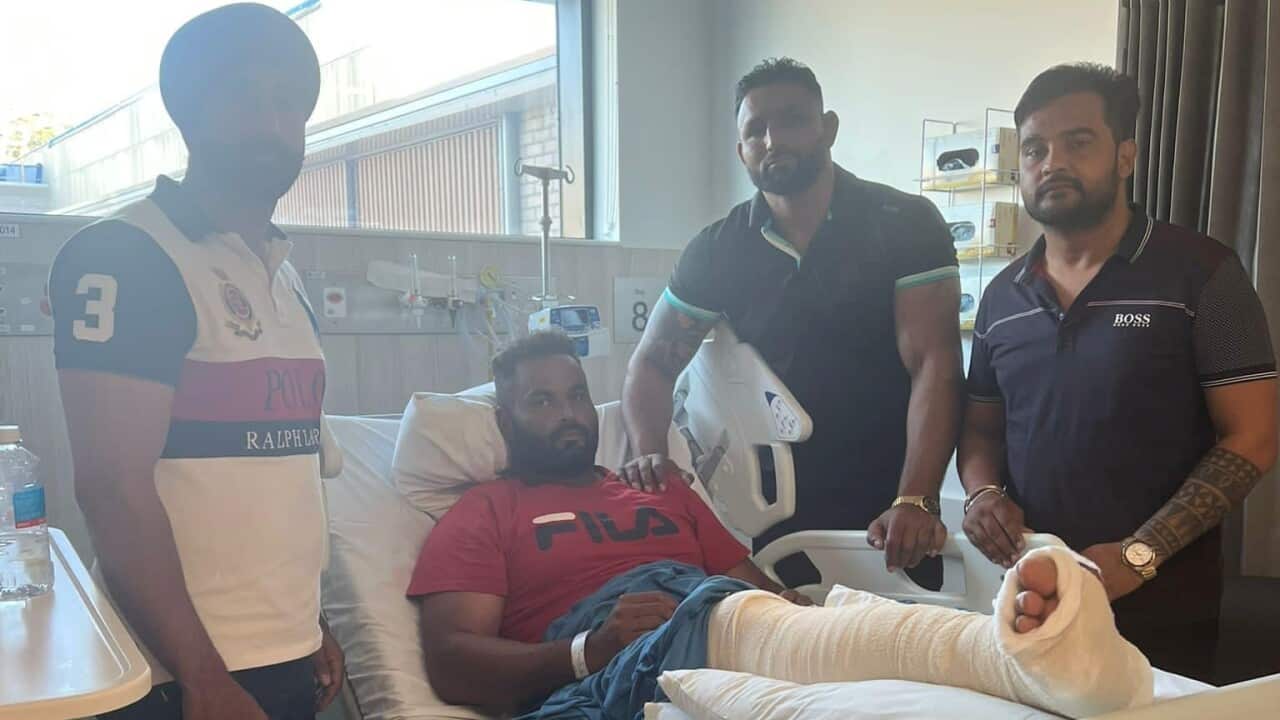 The community has come forward to raise over forty thousand dollars for Kabaddi player Goldy Gagewal, who got injured at the Australian Sikh Games held at Coffs Harbour over the Easter weekend. He is currently being treated for a broken leg at the Coffs Harbour Hospital.

The incident that saw Mr Gagewal injured, took place in the dying moments of the Kabaddi final that was held between the teams from Woolgoolga and Melbourne on April 17 at Coffs International Stadium.

The video footage of the match shows Kabaddi player Pala Jalalpuria, who was a ‘stopper’ at that moment, noting immediately that ‘raider’ Mr Gagewal was in serious trouble when he sank to the ground and didn’t move near the finishing line.

The Vice President of the local Sikh Games Committee, Harinder Singh Sohi, told SBS Punjabi that it was very unfortunate to see this player injured in such a manner.

Advertisement
“
Kabaddi is a combat sport
, and we often see players getting injured on the field. But this was something that was very serious in nature,” he said.

“He is one of the best Kabaddi players in Australia. He is a tough man, but I knew that he was seriously injured when he did not immediately get to his feet.”

Mr Sohi said that X-rays and a specialist consultation confirmed that his leg was broken and would need extensive surgery and subsequent rehabilitation before he could fully get back to action.

The Kabaddi match was stopped immediately after this injury, and commentators were seen appealing for funds to support Mr Gagewal, who is believed to be on a ‘student visa’.

“There was a huge gathering to witness this final game of Kabaddi. Many community members came forward to support him financially.

Within 30 minutes of the appeal, forty-two thousand two hundred and fifty-five ($42,255) dollars were raised to support Mr Gagewal.

“This act of generosity of our community members, friends and complete strangers has completely overwhelmed us. It is the true Punjabi spirit that aims to help people when they need it the most,” said Mr Sohi.
Hundreds of community members gathered at the 34th Australian Sikh Games held at Coffs Harbour over the Easter weekend from 15th to17th April 2022. Source: Supplied by Rajwant Singh

The local organising committee of the Australian Sikh Games has extended their heartfelt gratitude to everyone who has contributed to Mr Gagewal’s recovery thus far.

“We are very thankful to people who have made financial contributions. In addition to the on-site collection, many prominent community members have pledged over twenty thousand dollars to further support his needs. We request them to deliver these funds immediately to the affected family,” Mr Sohi said.

“We understand that it is going to be a long and painful process, but we hope for the best for this great player who has entertained people through his amazing game and high spirits.”

Listen to the full interview with Mr Sohi by clicking on the audio icon.

The community has come forward to raise over forty thousand dollars for Kabaddi player Goldy Gagewal, who got injured at the Australian Sikh Games held at Coffs Harbour over the Easter weekend. He is currently being treated for a broken leg at the Coffs Harbour Hospital.