‘You are welcome’: Griffith ready to host the annual Shaheedi Tournament 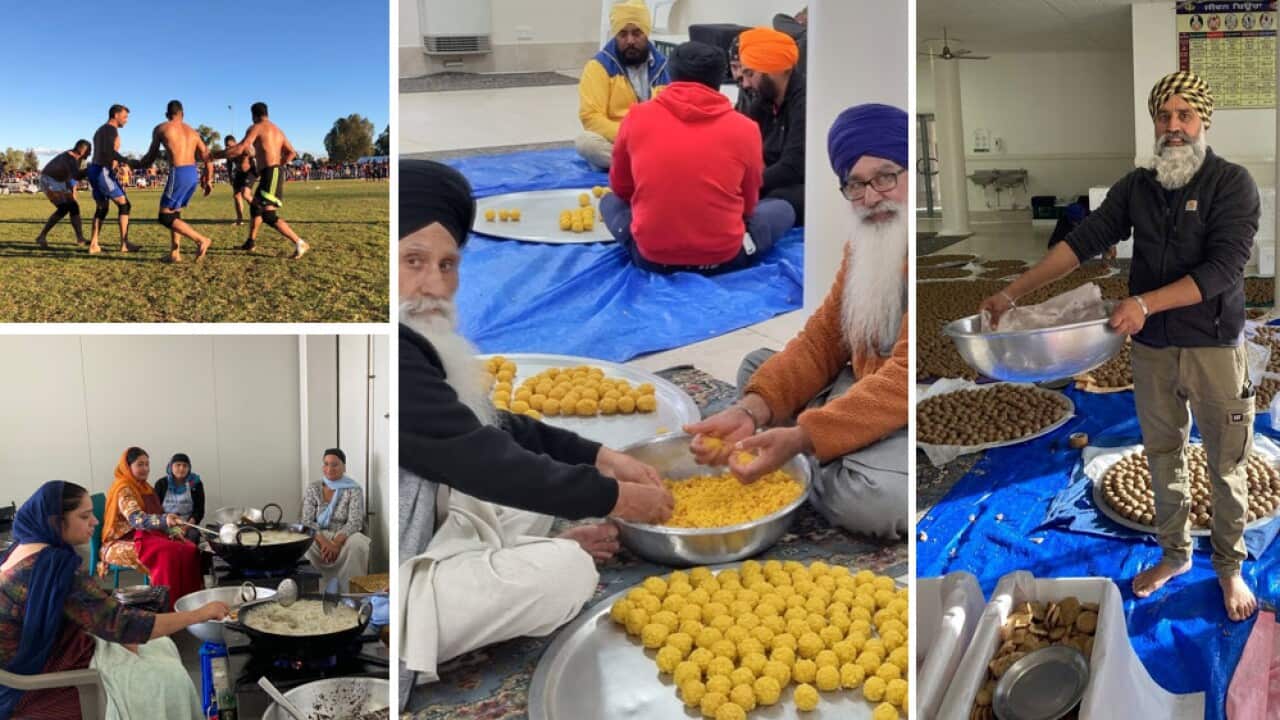 The preparations are in full swing for the 24th annual Shaheedi Tournament, Griffith. Source: GST

Griffith’s 24th edition of the annual Shaheedi Tournament 2022, is set to be held on the 11th and 12th of June. An estimated 12,000 to 15,000 people are expected to attend this premier sporting and cultural event.

Griffith’s Shaheedi Tournament is one of the biggest sporting and cultural events of the Australian Sikh community.

Every June long weekend, the Sikh community holds a two-day event at Ted Scobie Oval against the backdrop of Scenic Hill in Griffith.

After two years of COVID-related cancellations, Griffith's Shaheedi Tournament will finally make its long-awaited event this long weekend, with thousands of visitors coming to the town and adjoining areas.

"All the arrangements have been completed. Motels from as far as Wagga Wagga to Shepparton are fully booked, quintals of sweets have been prepared, and with the tireless efforts of the organising committee and the help of the local community, we can’t wait to welcome our guests,” Mr Khera said.

"We invite everyone to this two-day spectacle of sports which is to be enjoyed by young and old alike."
Women's Tug-o-war at a previous edition of the event. Source: Griffith Shaheedi Tournament

Griffith’s Shaheedi Tournament commemorates the sacrifices of Sikh martyrs for Sikh values and their faith.

Every year the tournament attracts more and more people to Griffith, and it is estimated that this year's tournament will be attended by 12,000 to 15,000 spectators and sportspersons.

In 2018 the tournament helped to inject $3 million to the local economy, and this year, we estimate to add $5 million for the local businneses that are struggling to recover after the pandemic.

"In total, we were able to collect $200,000 in donations to help support funds for this annual event. We're also thankful to the local council and the NSW government who have pledged an amount of $10,000 and $20,000 respectively," he said.
Kabaddi is expected to attract big crowds at the tournament. Source: Supplied

Talking about the major attractions, Mr Khera said they've had a huge response for the sports of Kabaddi, volleyball and soccer.

"Twelve Kabaddi and eighteen soccer teams are participating this year. Volleyball will have the most number of players with around 40 teams competing in different age groups.

“Other attractions include tug of war, athletics, turban-tying and quiz competitions, and much more!" he said.
SBS Punjabi's Preetinder Singh Grewal (turban) at the previous editions of Griffith Shaheedi Tournament. Source: Supplied

This event also serves as an opportunity for people living in metropolitan cities to visit Griffith and enjoy the local hospitality.

The organising committee has made a special request to all visitors - “Please don’t park cars on nature strips and abide by rules when driving during this long weekend."

Preetinder Singh Grewal and Sumeet Kaur from SBS Punjabi will be at the venue to provide extensive coverage of this event via our Facebook page.

Click on this link to listen to the full interview with Mr Khera in Punjabi.

Griffith’s 24th edition of the annual Shaheedi Tournament 2022, is set to be held on the 11th and 12th of June. An estimated 12,000 to 15,000 people are expected to attend this premier sporting and cultural event.