As the Aussies gear up to take on England at Lord's tonight, we take a look at the famous ground's long and colourful cricketing history.

1. Lord's Cricket Ground, established in 1814, is currently located at St John's Wood in London. The 'home of cricket' is owned by the world's biggest cricket brand, the Marylebone Cricket Club, which also owns the copyright to the Laws of Cricket. It is the MCC which makes changes to, or updates the rules of cricket.

2. As well as being the 'home to cricket', Lord's is also the home ground to the England and Wales Cricket Board, the Middlesex Country Cricket Club, the European Cricket Club and up until 2005, the International Cricket Council whose official quarters have since moved to Dubai in the United Arab Emirates. The move came after a request to the British Government to make an exception for the ICC to not pay corporation tax was denied. 4. Don Bradman who scored an epic 254 runs here in 1930, a ground record which held for 60 years until England's Graham Gooch hit a monster 333 runs against India in 1990. Glen McGrath also holds the record for most wickets(26) captured on the ground by a non-Englishman.

5. In terms of play, Lord's is most famous for having a sloping outfield. The south-west side of the ground stands almost two and a half metres lower than the north-west side, causing considerable deviation to the ball when bowling.

The outfield was notorious for regularly becoming too waterlogged to play on, and over the off-season of 2002/2003, administration expended £2 million to relay the entire outfield. This cost was almost immediately made back though with a reduced need to make out ticket refunds in wet-weather matches.

The Pavillion at Lord's. (Getty)

6. The first test match played at Lord's was between England and Australia in 1884, where the home side beat the Aussies by an innings and five runs. Australia's first test win at the grounds was in 1888.

7. Australia held a winning streak against England at Lord's from 1934 till 2009, when the local lads finally triumphed in the second match of the 2009 Ashes Series.

The Australian Ashes side. (Getty)

8. Located on Lord's grounds is also the world's oldest sporting museum - the MCC Museum. It contains the most celebrated collection of cricketing memoribilia including The Ashes which reside there permanently. A stuffed sparrow is also on display; memoralised as the unlucky 'bowled out' victim of a deadly beamer delivery from Jahangir Khan of Cambridge University during a match in 1936.

9. While Lord's is almost exclusively a cricketing venue, it also houses a full-length tennis court and during World War I, featured a charity baseball match between an American and Canaditan team. The Archery event of the 2012 Summer Olympics was also held on the hallowed ground. The archers stood in front of the Pavilion, at the Allen Stand end with their targets lined up in front of the Grand Stand. 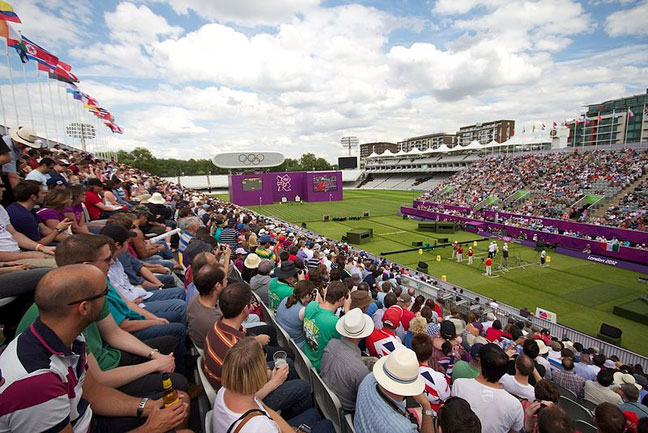 Lord's was the venue for the Archery competition at the 2012 London Olympics. (Getty)

10. The longest running cricket fixture at Lord's (an older ground, not the current ground) is the annual match between Eton College and Harrow School. This great sporting schoolboy rivalry started in 1805. The Aussies play England tonight in the second test of the Ashes series. A win at the hallowed grounds of Lord's would definitely come in handy if Australia are to reclaim the Ashes.