A scaled-down version of parliament is meeting on Monday to consider bills to cushion the blow of Australia sinking into a coronavirus-driven recession.

Australia faces its greatest challenge since World War II for at least the next six months, the prime minister says.

Scott Morrison addressed a scaled-down House of Representatives on Monday, invoking the spirit of the Diggers.

"So we summon the spirit of the Anzacs, of our great Depression generation, of those who built the Snowy, of those who won the great peace of World War II and defended Australia," Mr Morrison said.

"We gather today at a time of great challenge for our nation and indeed the world" - PM @ScottMorrisonMP #auspol @SBSNews pic.twitter.com/vcoiC6fqks

"Fear and panic of course feed on uncertainty and inconsistency and at the moment those ingredients abound" @AlboMP "This is a time for national leadership, consistent messages, clear directions" #auspol @SBSNews pic.twitter.com/g3RnAQ7qDt

A multibillion-dollar package of support for business and households impacted by the coronavirus pandemic is expected to get the parliamentary green light by the end of the day.

Bills will roll out two massive economic stimulus and safety net packages worth $17.6 billion and $66 billion respectively to stem the damage from a likely recession as a result of COVID-19.

Treasurer Josh Frydenberg has hinted at the potential need for a third stimulus package down the track.

"We will do what it takes to support the economy," he told ABC radio.

"The spread of the virus and the pain caused by this global pandemic will only really stop when we have a vaccine." 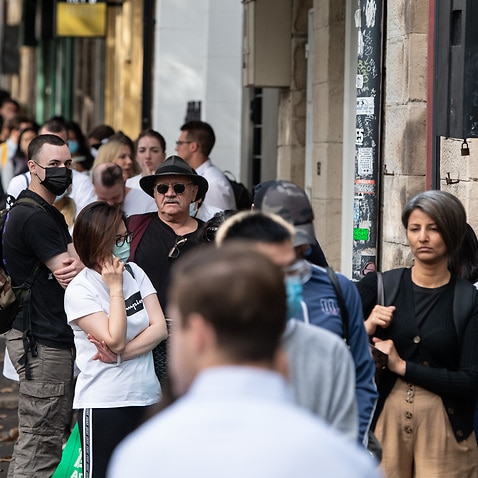 Labor will be offering a number of amendments to the bills but won't stand in the way of them passing if the proposed changes are rejected.

Mr Albanese is concerned about a new measure that would allow eligible people to tap their superannuation for $10,000 this financial year and next, if impacted by the coronavirus.

"It clearly isn't in the interest of individual superannuants to essentially sell-out at the bottom of the market. That would have a negative impact on their retirement incomes," he told ABC radio.

"And it would also, of course, have a negative impact potentially on superannuation if super funds have to sell their assets once again at the bottom of the market."

The pandemic has seen tens of billions of dollars wiped off share prices in the past few weeks.

Members and senators will be abiding by new rules to ensure there are four square metres for each person, and no more than 100 people in a room at any one time.

To do so in the lower house there will be 30 pairs, meaning up to 91 MPs will be present, and question time will be modified. Penny Wong in self-isolation after waking up 'feeling unwell'

In the upper house, there will be up to 54 senators from both major parties and the crossbench.

Doors have been left open and hand sanitiser made available around the parliamentary precinct in order to minimise the potential spread of the virus.

Beyond this week, talks are underway between the government and opposition on how often parliament will sit.

The next scheduled sitting was to be in May for the federal budget but the budget has been postponed until October 6.

'Do it for those you love': Jacinda Ardern gets COVID-19 vaccination and appeals to Kiwis to follow suit