One of the two people killed by a knifeman during an attack at London Bridge has been named as 25-year-old Jack Merritt.

One of the two people stabbed to death by terrorist Usman Khan during his London Bridge rampage has been named as Jack Merritt, a course coordinator at Cambridge University's criminology institute.

The woman who was killed alongside the 25-year-old is yet to be named, but Mr Merritt’s father took to social media to express his grief. 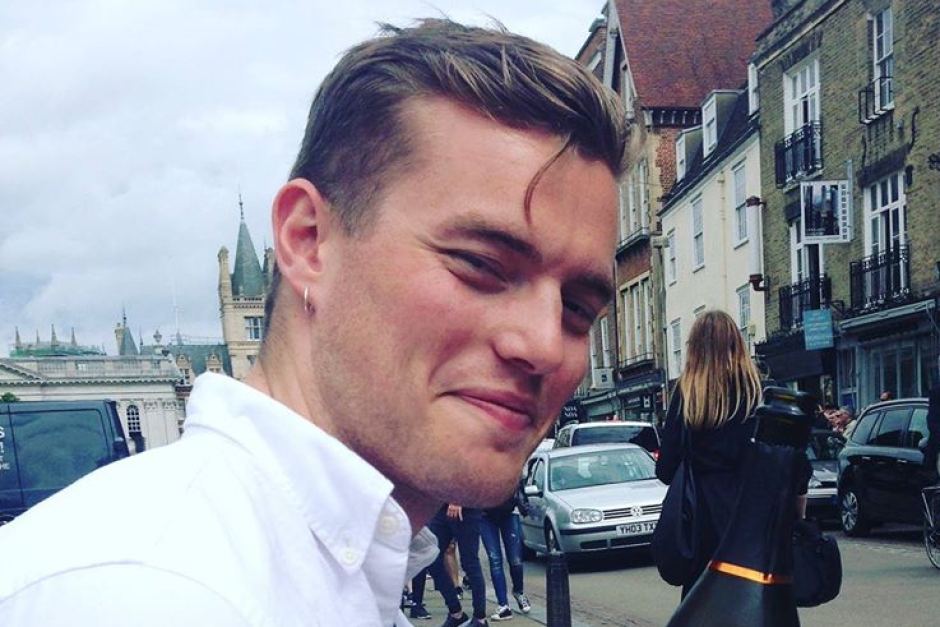 One of the two people killed during the London Bridge attack has been named as 25-year-old Jack Merritt.
Supplied

"R.I.P Jack: you were a beautiful spirit who always took the side of the underdog," David Merritt wrote on Twitter.

"My son, Jack, who was killed in this attack, would not wish his death to be used as the pretext for more draconian sentences or for detaining people unnecessarily.”

Mr Merritt has since deleted his tweets. Social media has also been flooded with tributes for Mr Merritt. 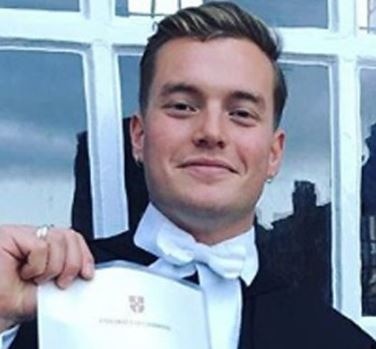 Jack Merritt’s death was confirmed by his father, David, who called him as a “champion for underdogs everywhere”.
Supplied

“Utterly lost for words. I too met him at Warren Hill. His open-heartedness, his drive and his faith in the redemption of prisoners through education shone out. He saved lives through his work,” barrister Tim Storrie tweeted.

Utterly lost for words. I too met him at Warren Hill. His open heartedness, his drive and his faith in the redemption of prisoners through education shone out. He saved lives through his work.

Thousands of people have posted tributes to him online, including Mercury Prize-winning rapper Dave, who wrote: "Rest in peace brother. One of the most painful things. Jack Merritt was the best guy.

"Dedicated his life to helping others, was genuinely an honour to have met someone like you and everything you've done for us. I'll never ever forget."

A vigil was also held in Cambridge on Saturday to mark the incident.

Mr Merritt said that he was overwhelmed by the messages of condolence and appreciation.

"Your kind words mean so much to us," he said.

"He was an exceptional young man, and I'm only finding out the half of it now he's gone."

UK media have reported the 25-year-old was a course coordinator at Cambridge University's criminology institute.

The institute hosted a prisoner rehabilitation event at Fishmonger's Hall, a historic building on the north side of the bridge.

Deeply sorry to hear that Jack Merritt was murdered in the terrorist attack at London Bridge. I interviewed him at Warren Hill prison about the course he ran for prisoners and university students: https://t.co/Lkdbzjk91S A fine young man, dedicated to improving people’s lives.

FAO: People talking about ‘the bravery of the public’ in yesterday’s #LondonBridge attacks, while simultaneously demonising ‘prisoners’: know that some of the ‘brave public’ individuals who tackled Khan were former prisoners too. Heroes. Part of our @JustisTogether family. 1/2

Khan attended the event reportedly armed with two knives and the fake suicide vest before going on his rampage that left another three people injured.

He reportedly threatened to blow up the venue before attacking Mr Merritt.

I saw Jack Merritt speak at a @lincolnsinn lecture a few weeks ago. The work that he and others did with offenders was inspirational.

It comes as no surprise to hear his father say this. https://t.co/ZxmTq1Ye7F

As the confrontation moved from inside the hall to the pavement outside, a throng of people could be seen in videos grappling with Khan.

They reportedly included a convicted killer on day-release from prison and other ex-offenders also attending the criminology gathering. 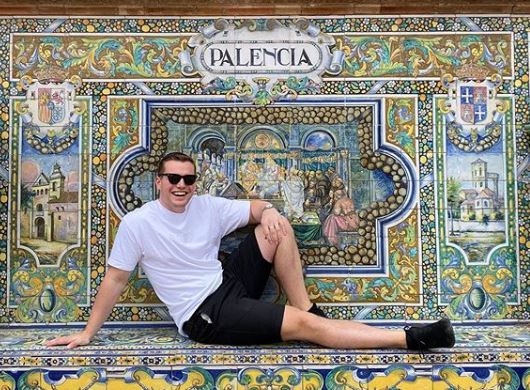 Tour guide Stevie Hurst told BBC radio: "Everyone was just on top of him trying to bundle him to the ground.

"I saw that the knife was still in his hand so I just put a foot in to try and kick him in the head," he said. 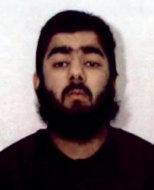 The attacker, named by police as 28-year-old Usman Khan, was out of prison at the time of the attack.
Press Association Images

A British Transport Police officer in a suit and tie who also intervened was seen carrying a large knife away.

"As we saw the worst of humankind, we saw the very best of human spirit and London," Met Commissioner Cressida Dick said Saturday as she visited London Bridge.

Police said on Saturday that Khan had been convicted in 2012 for his part in an al Qaeda-inspired plot to blow up the London Stock Exchange. He was released in December 2018 subject to conditions.

"There's got to be a very full investigation," Mr Corbyn said. 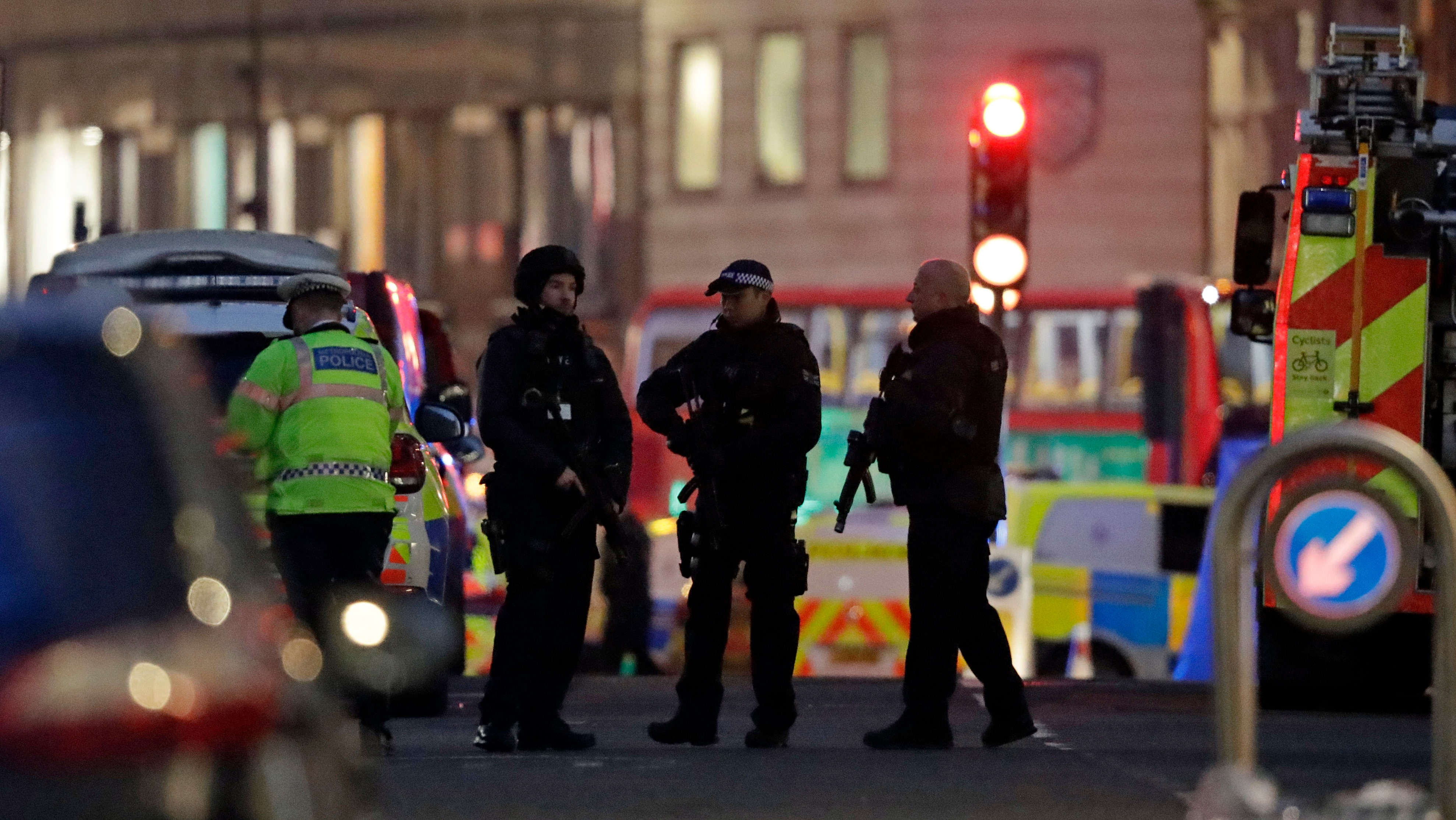 Armed police officers on the north side of London Bridge.
AAP

"I think there is also a question about what the probation service were doing ... and whether the parole board should have been involved in deciding whether or not he should have been allowed to be released from prison in the first place.”

Three people remain in hospital with two victims in a stable condition while a third person is suffering from less serious injuries, according to the National Health Service.

Police said they were continuing their investigation by searching an address in Stafford and the Stoke areas of central England, with the country's top counter-terrorism officer saying they were not looking for any other suspects. 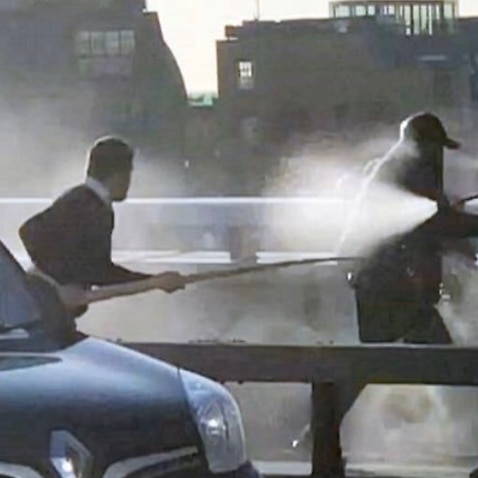 "We have found no evidence to suggest anybody else was involved in this attack," said Neil Basu. "Our investigative priority at this time is to ensure that there is no related outstanding threat to the public."

London Bridge was the scene of an attack during the 2017 election when three militants drove a van into pedestrians and then attacked people in the surrounding area, killing eight people and injuring at least 48.