From the gold rush in the 1800s to today's opportunities for skilled migrants: is Australia really the most successful multicultural society in the world?

Prime Minister Malcolm Turnbull likes to say that Australia is the most successful multicultural society in the world. And while that might gloss over the country’s history of racial exclusion (and the three senators from anti-immigration party One Nation in federal parliament), contemporary Australia can make a good claim on the title.

That’s because Australia has a higher proportion of people born overseas (26 per cent) than other high-immigration nations, including New Zealand (23 per cent), Canada (22 per cent), the United States (14 per cent), and the United Kingdom (13 per cent). In fact, the only country that has a higher overseas-born population is Saudi Arabia (32 per cent) which permits foreigners to work but does not offer permanent residency or citizenship.

Since 1945, when Australia’s immigration department was established, seven million permanent migrants have settled in Australia. The 2016 census revealed a diverse nation. Nearly half of all Australians were born overseas or have at least one parent who was. More than one in five Australians speak a language other than English at home. The most common countries of birth after Australia were England (five per cent of the population) and New Zealand (2.5 per cent), followed by China (2.3 per cent) and India (2.1 per cent). Since the mid-2000s, Chinese and Indian arrivals have outpaced arrivals from the UK and migration has replaced births as the driver of population growth. DNA evidence suggests the first people to migrate to the Australian continent most likely came from South-East Asia between 40,000 and 60,000 years ago, according to the Immigration Department's official history. Estimates of the size of the Aboriginal population before European settlement range between 300,000 and 1.5 million: some 600 tribes speaking more than 200 distinct languages.

Today Aboriginal and Torres Strait Islander people account for 2.8 per cent of the country's 24 million people. Most of the first modern migrants ti Australia were involuntary arrivals: British convicts sent to the penal colony of New South Wales. Until the mid-1800s, the population was dominated by British and Irish people. But the discovery of gold near Orange, NSW, in 1851 triggered a gold rush that changed the face of Australia. 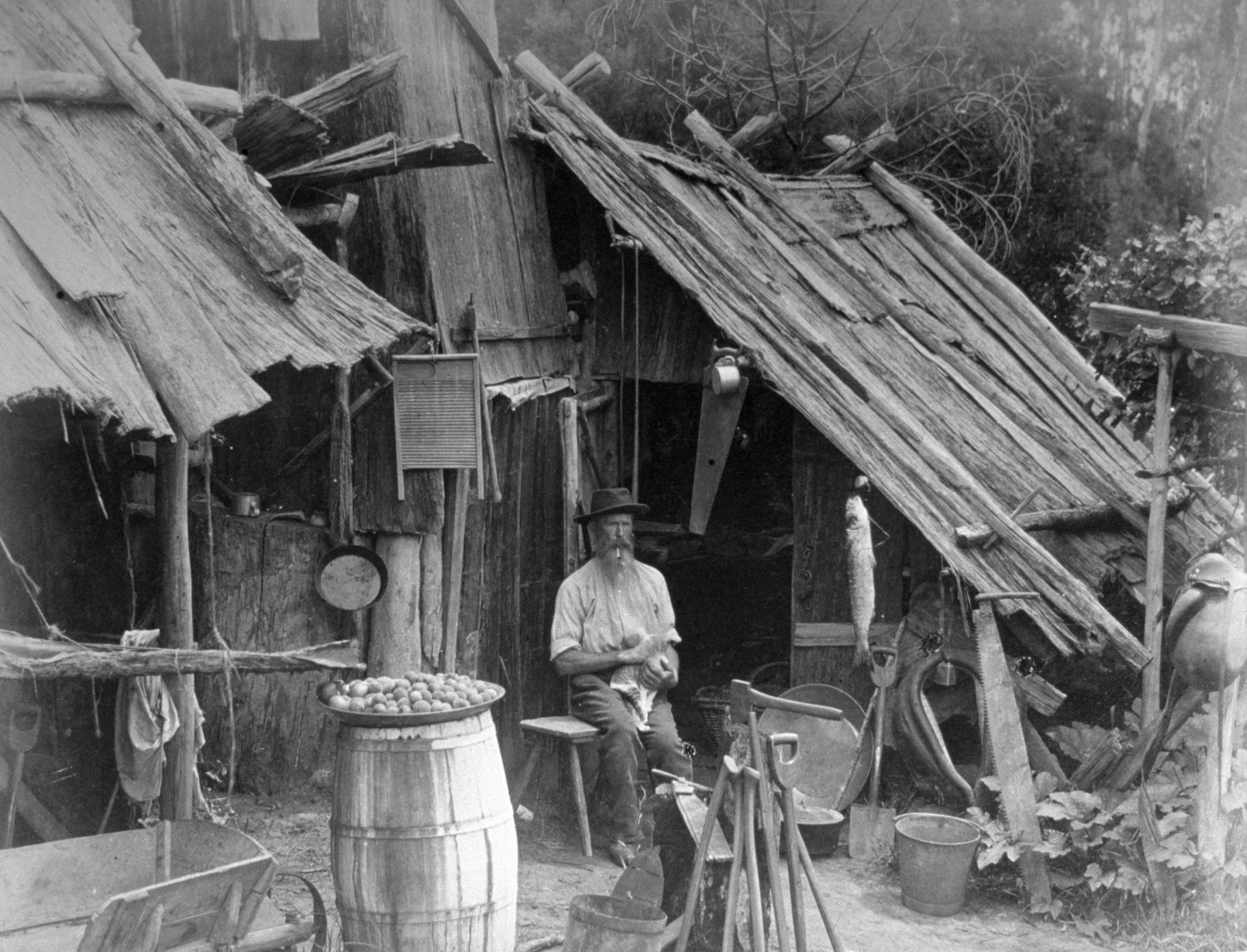 Prospector sits in front of his prospectors hut in the gold rush in Fly Flat, Western Australia.
Universal Images Group Editorial/Getty Images
Xenophobic hostility toward the newcomers focussed on the Chinese, whose different work practices were regarded as a threat to wages and employment, according to the Department of Immigration’s history. The tension resulted in anti-Chinese riots which resulted in several deaths, leading to the colonies’ first restrictions on immigration, targeting Chinese people.

The potato famine in Ireland in the late 1840s saw some 30,000 Irish migrants settle in Australia, and the push to develop Australia’s outback led to a government decision to bring in 2000 cameleers mainly from India and Afghanistan.

Some 50,000 people, mostly men from Vanuatu and the Solomon Islands, were brought to Australia in the late 1800s to work as indentured labourers in the primary industries in Queensland. Mostly brought against their will, many stayed on and built a community. Multiculturalism must be reinvented in order to survive: study 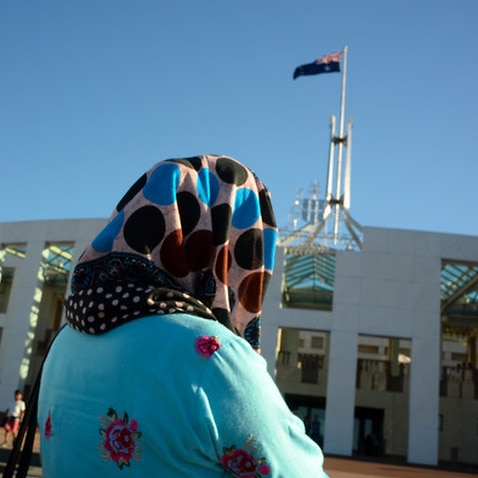 At federation in 1901, three million people in the six colonies became the nation of Australia, and the new country’s parliament - made up of white men - defined it as a white man’s nation.

The Immigration Restriction Act 1901 became known as the “White Australia Policy”, aimed at discouraging non-white migrants. It included a notorious dictation test of 50 words in a European language - immigration officials could choose any language they pleased - which applicants had to pass to emigrate to Australia. Japanese pearl divers and Malay and Filipino boat crew were exempt from the test. But there were thousands of Australians of Chinese, Syrian and Indian background who were forced to apply for documents to exempt them from the test if they travelled. Immigration virtually ceased during the first world war. But during the 1920s more than 340,000 immigrants arrived - two-thirds of them assisted migrants from Britain, and small numbers of Greeks, Italians and Yugoslavs.

The Great Depression, which began in 1929, saw unemployment rates skyrocket and attitudes towards immigrants turn hostile. Immigration declined sharply through the 1930s.

Ahead of the Second World War, as the political climate for Jews in Germany and Austria darkened, Australia agreed to accept 15,000 Jewish refugees from Europe - evidently with some reluctance. Just 5,000 arrived in 1939 before Jews in Europe could no longer escape.

After the war, Australia appeared to take a more generous approach, agreeing to take refugees under the international Displaced Persons Scheme and admitting more than 170,000 Europeans by 1954. Over 17,000 of them were Jews.

In 1948, parliament legislated to create Australian citizenship - before that, all Australians were British subjects. But Australia still actively sought British migrants in preference to other nationalities, with ventures like the assisted passage scheme known as the "Ten Pound Pom" (the price of the ticket) kicking off in the late 1940s and running almost 25 years. But the post-war environment saw a significant shift in Australia’s attitude to migrants and set it on the path to multiculturalism. A national poll taken in 1943 found 40 per cent of Australians supported “unlimited immigration”, driven in part by a critical labour shortage. The country’s first-ever immigration minister Arthur Calwell promoted the idea that Australia needed to “populate or perish".

Australia began accepting migrants from more than 30 European countries, including the Netherlands, Austria, Belgium, Spain and West Germany. But the largest national groups of arrivals after the Brits were the Italians and Greeks until the early 1970s.

More than 100,000 migrants from 30 different countries worked on the Snowy Hydro project, a hydroelectricity scheme in south-east Australia that kicked off in 1949 and took 25 years to complete. The dictation test was abolished in 1958. By 1960, the population was 10 million and around nine per cent of the population were of non-British origin, mostly Italians, Germans, Dutch, Greeks and Poles.

Other restrictions on non-European migration were relaxed from 1966 and the number of arrivals started to increase accordingly. Australia began to change rapidly. By 1971, one in three people living in Australia were migrants or the child of a migrant. In 1973, Labor Prime Minister Gough Whitlam changed the law to allow all migrants regardless of race or ethnicity to apply for Australian citizenship after three years of residence. His immigration minister Al Grassby declared the White Australia Policy dead. “Give me a shovel and I’ll bury it,” he said.

In 1975, racial discrimination was made illegal. Three years later, the publicly-funded Special Broadcasting Service (now known as SBS, publisher of this website) was established to cater to Australians of a non-English speaking background.

Humanitarian intakes saw the settlement of Lebanese and Cypriot people during the early 1970s; followed by a significant wave of Indochinese arrivals displaced by the Vietnamese and Cambodian conflicts. Over 2,000 Indochinese refugees landed in boats on Australian shores in the late 1970s, but the majority of the 80,000 Indochinese permanent migrants came by air after they were formally processed by Australian officials at refugee camps in Malaysia and Thailand. 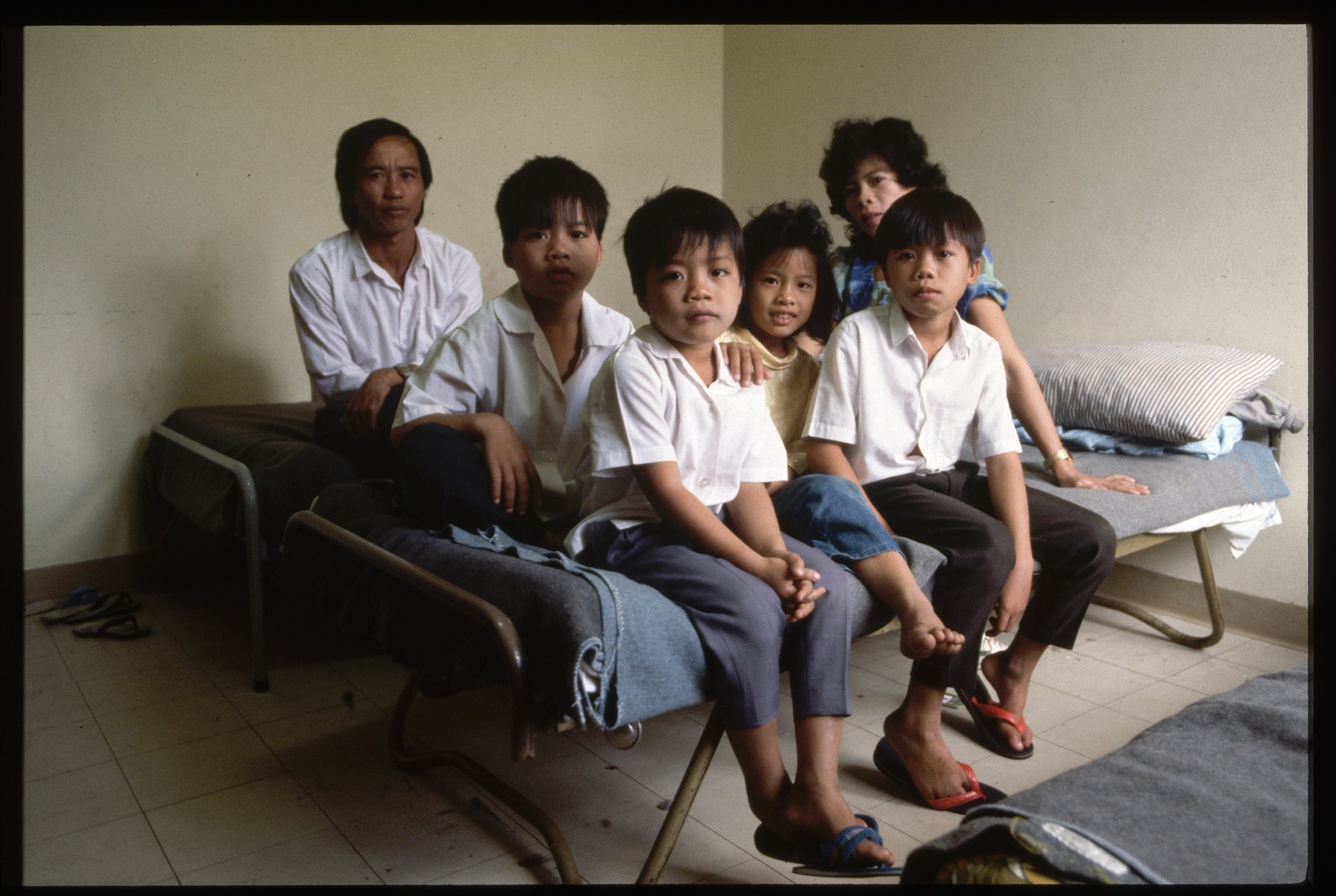 A refugee Vietnamese family in their room at a reception hostel upon their arrival in Sydney, Australia c.1978.
Corbis Historical/Getty Images

From the late 1990s, increasing numbers of asylum seekers fleeing conflict in the Middle East and Sri Lanka arrived in Australia by boat, mostly organised by people smugglers. Australia’s government cracked down on what it called “unauthorised” arrivals. Its offshore detention programs, designed to deter asylum seekers, have earned criticism from the United Nations and human rights groups, but the "stop the boats" policy has retained strong bipartisan support.

In parallel with its hardline asylum policies, it's worth noting that Australia has thrown open its doors to migrants, with some 190,000 permanent new arrivals settling each year for the past five years. Temporary arrivals including international students and those on 457 work visas were around 400,000 in 2015-16. And the humanitarian intake has been about 11-14,000 a year since the mid-1980s. There was a special intake of 12,000 Syrians announced in 2015 under former Prime Minister Tony Abbott in response to the war in Syria. 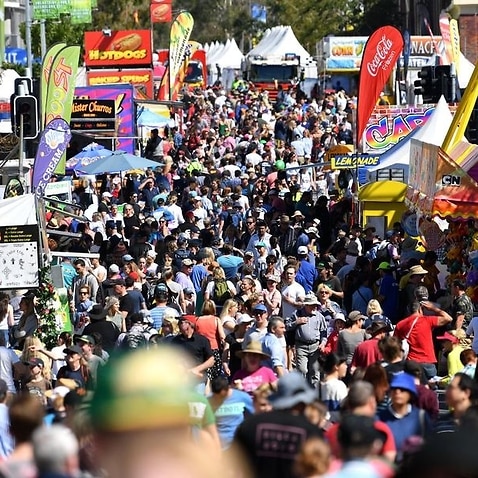 Since the 1980s, the focus of Australia’s immigration policy has been on selecting migrants who fit much-needed skills criteria, along with family visas. In 2017 the Turnbull government moved to restrict the skilled visa system and tighten requirements for citizenship, including reinstating a tough English-language test. But those changes have been put on ice after it became clear they did not have support in the Senate, leading to a surge in citizenship applications.