Officials say the massive explosion that tore through Lebanon's capital, killing at least 135 people and injuring over 4,000, resulted from the ignition of a huge depot of ammonium nitrate at Beirut's port.

A mega-blast tore through Lebanon's capital with the force of an earthquake, killing at least 135 people and injuring over 4,000.

The explosion resulted from the ignition of a huge depot of ammonium nitrate at Beirut's port, officials say, but many questions remain.

Here is what we know so far:

An initial large explosion shook Beirut's port area at around 6:00 pm local time on Tuesday, resulting in a fire, several small blasts and then a colossal explosion that flattened the harbour front and surrounding buildings. Seismologists measured the event, which blew out windows at the city's international airport nine kilometres away, as the equivalent of a 3.3 magnitude earthquake.

Video stills show an intense blazing fireball rising above a line of massive storage silos, then a billowing cloud towering into the sky as a powerful shockwave rips through Lebanon's largest city.

Why such a big blast?

Lebanon's Prime Minister Hassan Diab said 2,750 tonnes of fertiliser ammonium nitrate stored in a portside warehouse had blown up, sparking "a disaster in every sense of the word".

Ammonium nitrate is an odourless crystalline salt that has been the cause of numerous industrial explosions over the decades.

When combined with fuel oils, it creates a potent explosive widely used in the construction industry, but also in homemade bombs such as those used in the 1995 Oklahoma City attacks.

Many European Union nations require ammonium nitrate to be mixed with calcium carbonate to make a safer compound.

Regulations in the United States were tightened significantly after the Oklahoma City bombing, which used two tonnes of ammonium nitrate and killed 168 people. Lebanese youth clear glass debris in a street, one day after an explosion at the Beirut Port.
EPA

Why was the fertiliser stored at the port?

A security official said on condition of anonymity the ammonium nitrate had arrived in Lebanon in 2013 on board a Moldovan-flagged ship sailing from Georgia and bound for Mozambique.

According to Lebanese law firm Baroudi & Associates, which represents the crew of the "Rhosus", it had faced "technical problems".

Several security officials told AFP that it temporarily docked at the port but was later seized by authorities after a Lebanese company filed a lawsuit against its owner.

Port authorities unloaded the ammonium nitrate and stored it in a rundown port warehouse with cracks in its walls, the officials said. 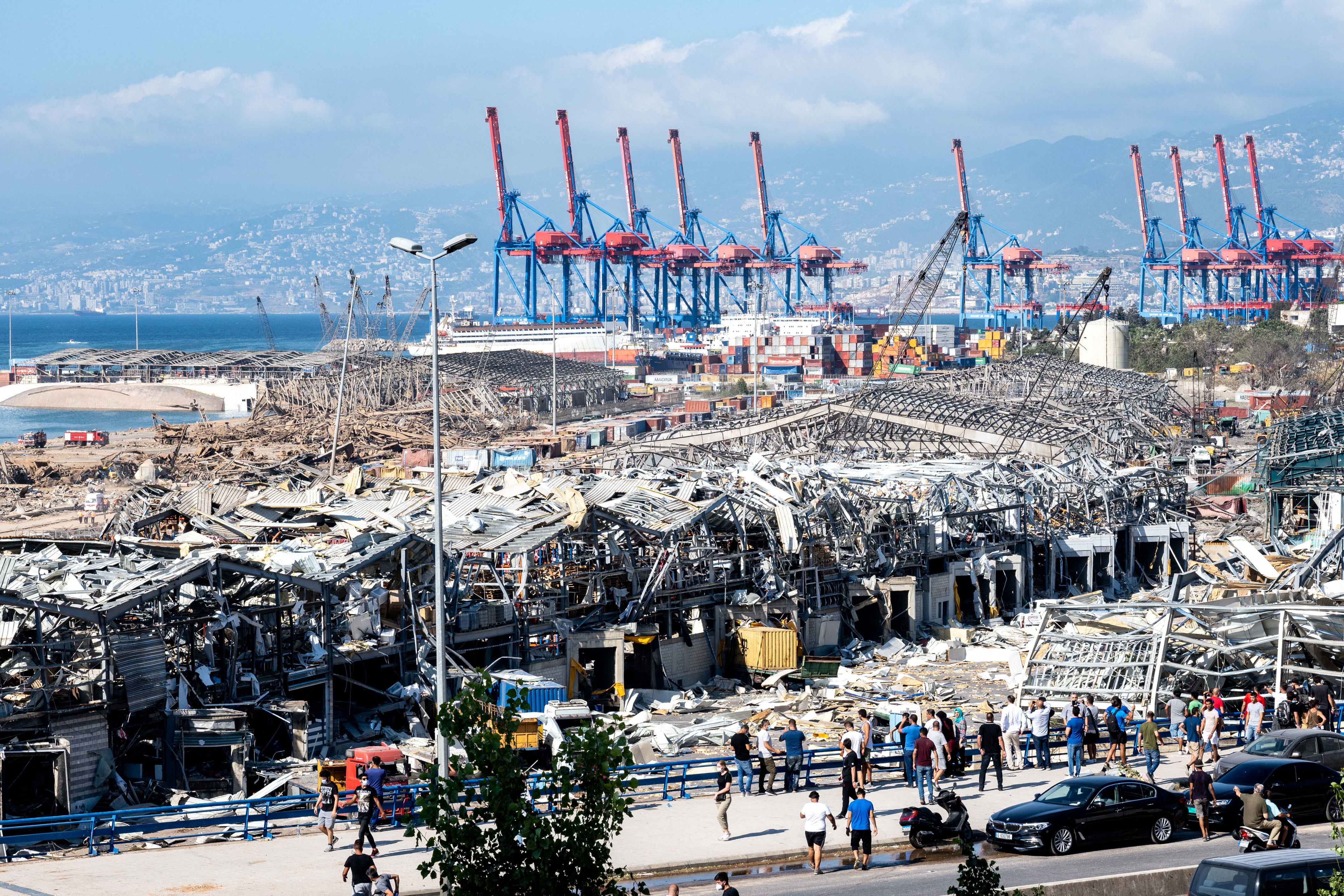 The destruction at the port of Beirut, as seen the day after a huge unknown blast.
ABACA

Security forces launched an investigation in 2019 after the warehouse started to exude a strange odour, concluding the "dangerous" chemicals needed to be removed from the premises, but action was not taken.

This week workers began repairs on the decrepit warehouse, causing speculation that might have triggered the blast.

Who is to blame?

Lebanese port authorities and customs officials knew the chemical was being stored in the port, but despite warnings, action was not taken to remove it.

Hassan Diab's government described the circumstances at the port that led to the explosion as "unacceptable" and vowed to investigate. 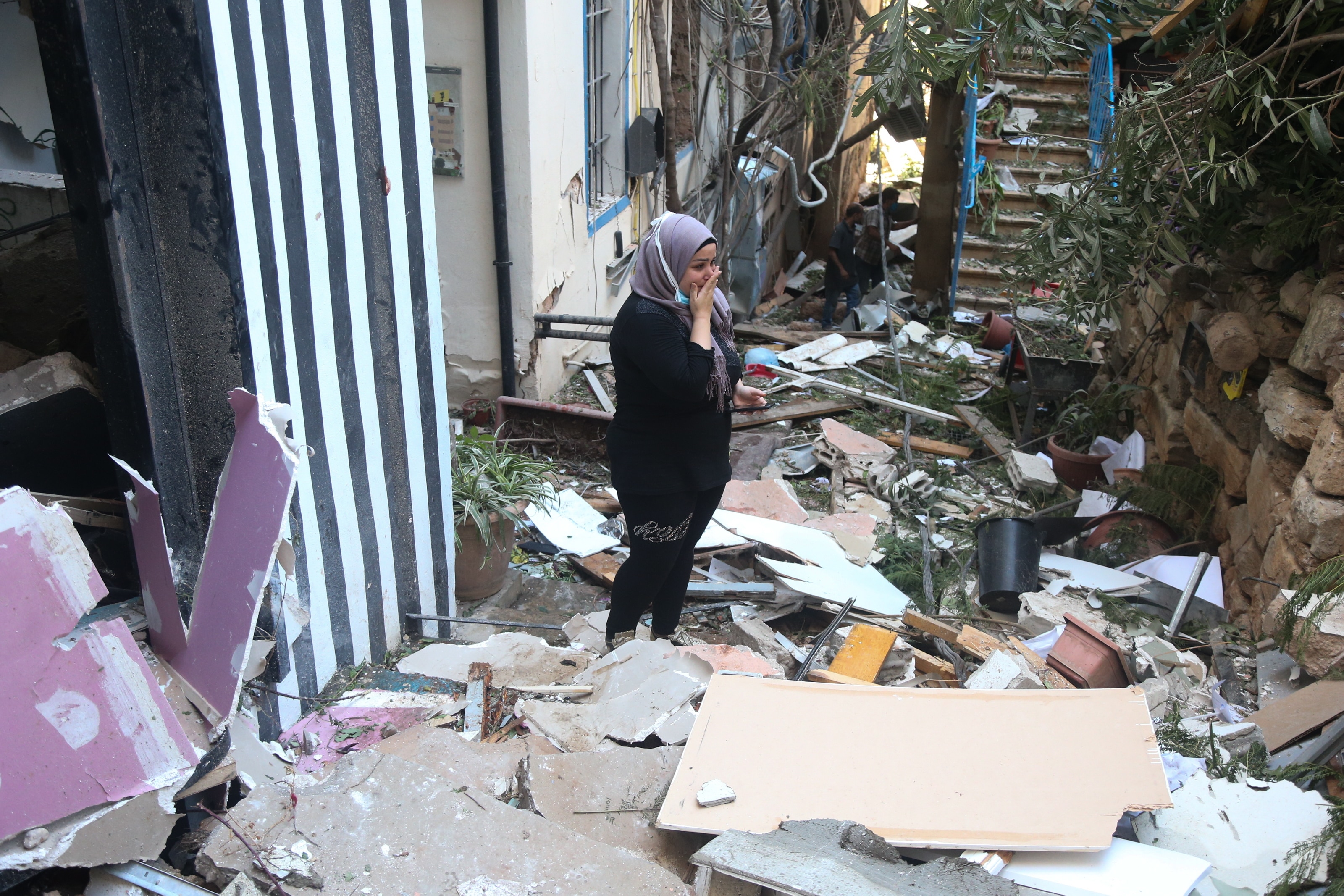 A Lebanese woman reacts to the destruction around her, one day after the explosion at the Beirut Port.
EPA

It said later Wednesday it would seek house arrest for all officials involved in storing the substance.

Fuelling the confusion, US President Donald Trump said late Tuesday that US generals had told him the explosions appeared to have been caused by a "bomb of some kind", without offering evidence.

But a Pentagon spokesman, when asked about the president's remarks, told AFP that "we don't have anything for you" and "you will have to reach out to the White House for clarification."

The blasts killed at least 135 people and injured over 4,000. Dozens of people are missing.

Search and rescue teams are still sifting through areas surrounding the port, with rubble from flattened buildings spread across a wide area.

People were injured across the city, with glass blown out of buildings, cars destroyed and according to the city governor, up to 300,000 left homeless.

But the country is in the middle of an enormous economic crisis and its hospitals are already overwhelmed by the coronavirus pandemic.

Several nations including the US, France, Jordan, Iran and even Lebanon's arch foe Israel have offered to send aid.
Some, including mobile hospital from Qatar, rescuers from Greece and medical supplies from Kuwait, have begun to arrive.