Nazira Zuptarova wants to raise awareness of the 40 million people trapped in forced labour and human trafficking around the world and is calling on Australian businesses to do more. 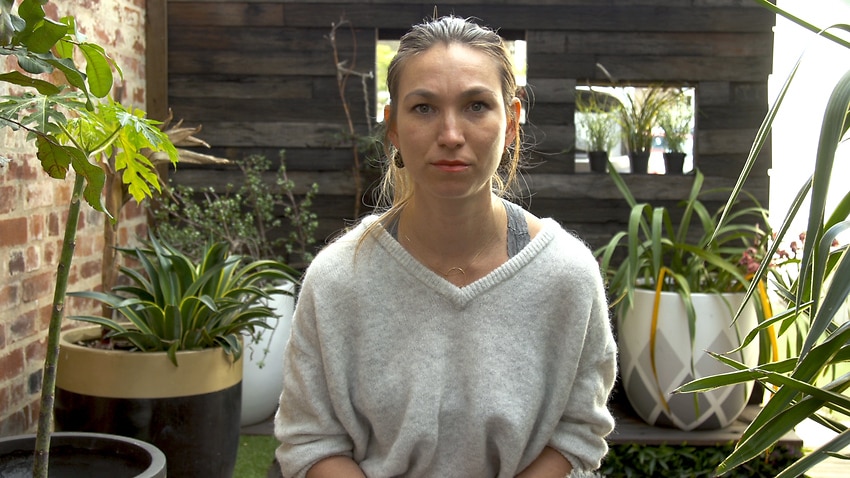 Nazira Zuptarova is a softly spoken 33-year-old living in Sydney.

She’s bright-eyed and smiles often. There's little sign of her harrowing experience as a child slave in the cotton fields of Uzbekistan.

Aged just seven, she was forced to pick cotton in the hot sun along with thousands of other children, under a state-controlled system of forced, unpaid labour.

"We would start picking early in the morning, for the whole day,” Nazira, who now lives in Sydney, told SBS.

“I was pretty young, I was seven years old then. I just remember being very bored, and hot, and looking after my little brother, and so very tired as well.”

“It makes me really sad and angry that someone else can just take away your rights like that, to take away your life, and just do whatever they want with you.”

It makes me really sad and angry that someone else can just take away your rights like that, and just do whatever they want with you.

Nazira, her mother Zuhra, and baby brother Faruh had crossed the border into Uzbekistan in 1992, after fleeing their home in Dushanbe, the Tajikistan capital.

At the time, Tajikistan was in the grip of civil war, which lasted five years, left up to 100,000 people dead and displaced between 10 and 20 per cent of the population.

Nazira Zuptarova as a small child with her mother Zuhra, before they fled Tajikistan. Source: Supplied

“My stepfather was in one of those fighting parties, and soldiers [from the opposing forces] came to our house,” Nazira said.

“They threatened my mother, saying ‘if we come tomorrow and you’re still here, we will kill your son in front of you and rape your daughter and kill her afterwards’.

“We were terrified. So we escaped into Uzbekistan that night and left everything behind.”

As a child, Nazira was forced to pick cotton in Uzbekistan. Source: Supplied

Nazira hoped the family could stay with relatives in Samarkand, a city in Uzbekistan, but they were rejected and her mum had to leave the children with another family.

“So, like everyone else, we were forced to pick cotton every day during the season,” she said.

“It was something we accepted as normal because other families were also forced to do that”.

“All the schools and colleges would close because the kids would stop studying so they could go to the fields to pick cotton.”

Nazira now works in administration, but having just returned from an internship at the United Nations, she is passionate about ending forced labour - in Australia and overseas.

She hopes a master of human rights law will give her the skills to help tackle the problem.

“I don’t understand how people can take complete control and say ‘you’re going to be working for me now'," she said.

The Global Slavery Index estimates 40.3 million people are enslaved worldwide, many in Africa, Asia and the Pacific Islands. Women make up 71 per cent of victims with many trapped in the sex industry and others forced to work for no wages in mining, retail and hospitality.

And it's also happening in Australia.

“Research shows that Australia has around 15,000 people trapped in slavery, but I think the real figure could be much higher,” said Sally Irwin founder of The Freedom Hub.

The social enterprise was set up in 2015 to help victims of modern slavery, and Nazira has worked in its cafe which sells ethically grown coffee and puts profits towards supporting survivors.

Its survivor school has helped up to 70 modern slavery victims get back on their feet, so far.

“Like most Australians, I was absolutely shocked when I found out there were people in slavery in our country,” Ms Irwin said.

Like most Australians, I was absolutely shocked when I found out there were people in slavery in our country.

Ms Irwin witnessed the impacts of human trafficking first hand while working in a needle exchange program in Berlin.

“In Europe, it was very much sex trafficking,” she said.

“There were container loads of girls being stopped on the highway from Poland into Berlin, with dead girls in there because they had run out of air. That’s full-on trafficking that we cannot even imagine here in Australia.”

After the Australian Federal Police intercept a modern slavery survivor, they refer them to the Red Cross. Later, some are sent to The Freedom Hub, where they supported as they transition back into society.

Each survivor transition costs up to $20,000 and may take several years.

How businesses can help

Ms Irwin says the Freedom Hub has been inundated since the Modern Slavery Act raised awareness of the problem, with many victims self-referring.

Some young women are escaping sexual servitude and others are fleeing forced marriages.

"We’ve seen girls as young as 11 being forced into marriage within Australia and most of them are born here and they are Australian,” Ms Irwin explained.

The Freedom Hub also runs workshops to assist small businesses to understand how they can help to eradicate forced labour in their goods and services.

“If Australia cleans up its supply chains, and works towards finding transparency in those supply chains we’ve got a huge opportunity to completely smash global slavery,” she said.

Nazira recently visited one of a growing number of small businesses working to end modern slavery.

“We own our own factory here and we pay award wages very proudly, and we source organic cotton and merino wool from non-mulesed sheep,” Mr Csaki said.

Their first seamstress is a re-skilled refugee from Burma who learned to sew at a social enterprise in nearby Newtown.

"We are trying very hard to do the right thing," Mr Phu added.

Australia's new Modern Slavery Act requires both public and private organisations turning over more than $100 million annually to report on actions to mitigate risks of slavery in their operations and supply chain.

Many smaller businesses are also getting on board, according to Scott Alden a modern slavery specialist and partner at law firm Holding Redlich.

“Small businesses need to understand this legislation, and they need to be ready to respond to bigger businesses that are asking questions about their modern slavery approach,” Mr Alden said.

"As soon as [a business] says to someone 'come over to Australia and work for me, I’ll pay you ten dollars an hour and at the end of 1,000 hours you’ve paid off your debt to me and I’ll give you your passport back' that’s debt bondage and that is modern slavery.”

“We as consumers interact unknowingly with modern slavery at least once a month, for instance at the nail parlour staffed by predominantly female workers, or getting a massage ... or when we eat at a local restaurant,” Mr Alden said.

“Modern slavery is in those supply chains and we don’t necessarily see it.”

“There are signs though: if the person looks fearful, undernourished and won’t look you in the eye. If there’s someone who seems to be controlling them or taking the money.”

After a year being forced to pick cotton and with few opportunities in Uzbekistan, Nazira's family crossed the border back to Tajikistan and the civil war finally ended in 1997.

Her life changed completely when her mother re-married and the family transferred to Perth in 2009.

“It was weird and a massive culture shock,” she said.

“Now I love Australia but it took me three years until I felt at home because it was just so different.”

After six months in Perth, aged 23, Nazira decided to move to Sydney.

Through working with the Freedom Hub, Nazira says she has come to understand the wrong that was done to her and now wants to help others.

“[Thinking back] it makes me angry, like did that really happen to me, was I really a child slave? And it’s still unbelievable,” she said.

“If you think you might be a victim speak up and talk to someone. It’s not OK and it’s not normal.”

“When you lose hope, you have nothing to live for. Then when someone gives it back to you there’s light at the end of the tunnel.”

If you are a victim of trafficking or know someone who is, contact the AFP on 131237 or email AOCC-Client-Liaison@afp.gov.au. You can also use the AFP's online form to report information regarding human trafficking for the purposes of sexual and/or labour exploitation, organ harvesting, forced marriage and slavery. In an emergency, call 000.