The total number of confirmed COVID-19 cases in Australia has surpassed 3,000.

A further 41 coronavirus cases have been linked to the embattled Ruby Princess cruise ship in New South Wales, bringing the total number of infected passengers in the state to 162.

Authorities have been widely criticised for their decision to let thousands of people disembark the ship in Sydney Harbour last week despite some passengers showing potential symptoms as the number of COVID-19 cases in Australia surpasses 3,000.

The Australian Border Force has blamed NSW health authorities for allowing passengers to enter the Sydney community before being diagnosed. 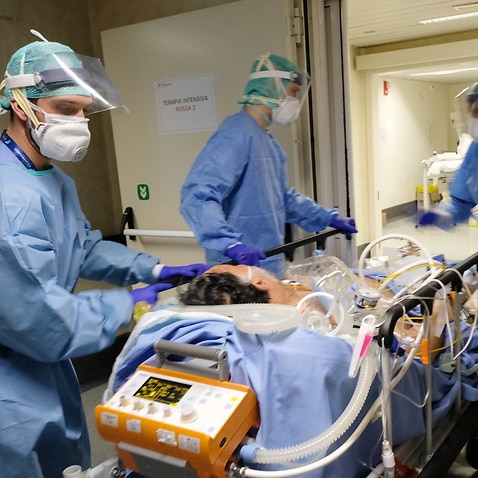 Global coronavirus cases pass half a million, but true figure could be higher

At least 26 other Ruby Princess passengers have also tested positive to the virus outside NSW.

One infected passenger, a 77-year-old woman, has died. She was one of 13 passengers - three who have tested positive - who showed symptoms before disembarking at 6am on 19 March.

Home affairs minister Peter Dutton said on Thursday that state authorities had made a "serious mistake" by letting the ship dock and NSW Premier Gladys Berejiklian has banned all cruise ships from docking in the state until new protocols can be established. Meanwhile, the majority of passengers on a German-owned cruise ship off the coast of Western Australia will be flown back to Frankfurt on charter flights, senator Mathias Cormann said on Friday.

Seven people - five guests and two crew members - have tested positive for the virus and have mild symptoms.

Senator Cormann indicated to Sky News that some would receive medical care in Australia if needed.

In Victoria, an additional 54 confirmed cases were announced overnight, bringing the state's total to 574.

Nationally, 13 people have died after contracting the virus; seven in NSW, three in Victoria, two in West Australia, and one in Queensland.

More than 40,000 retired health professionals to be reinstated in fight against coronavirus