The 97-year-old was still active in campaigning for a sustainable planet right up until his final days.

Climate activist and veteran Bill Ryan has passed away at 97-years of age. He was legally blind, arrested seven times, and became a figurehead of the climate protests and the climate justice movement.

Mr Ryan was a passionate protester, well-known for his action on climate change and demanding an end to the use of coal. But the climate wasn't his only focus, with his activism stretching back to the protests against the Vietnam War, and the anti-apartheid protests in the 1960s and 1970s. Speaking with SBS shortly after one of his arrests, he said he was willing to go to jail if that’s what needed to happen for the government to start listening and taking action on climate change.

“At this stage of life, I think I'd be wasting my time if I didn't take action against this.”

At this stage of life, I think I'd be wasting my time if I didn't take action against this

Former Greens senator Lee Rhiannon worked closely with Mr Ryan, and told SBS News his passing is an enormous loss for both the Greens, and the wider climate justice movement.

“He has worked in ways that showed a very deep commitment to direct action, when issues become so serious to working in a collective way with people, and many people have been inspired and taken up, and worked harder for many causes because of Bill’s work.” Serving in the Kokoda campaign played an important role in shaping Mr Ryan’s outlook on equality and activism.

Ms Rhiannon said that after experiencing the war, Mr Ryan wanted to use his experience to encourage a more egalitarian society.

“He was a veteran of the second world war, Kokoda campaign. Which informed a lot of his outlook in terms of why we needed to work for a juster, peaceful world where companies weren’t exploiting people and the environment.”

Vale to our old mate Bill Ryan, 1922-2019. A life-long brave, staunch and compassionate hero for environmental and social justice. We always thought Bill would reach his century and are absolutely devastated for those who loved him most. pic.twitter.com/PuRSRzYETH

Speaking with SBS in October, Mr Ryan was quizzed about complaints regarding Extinction Rebellion's unique approach to driving home the climate change message.

The well-seasoned activist stood by his decision to take part in civil disobedience, arguing protests are a key part of democracy.

"Inconvenience? It was inconvenient for me to be in the army for four years of my youth."

After being arrested at a protest and ordered to front court, Mr Ryan was met with a unique piece of advice.

Upon seeing the mature protester, the judge was surprised by Mr Ryan's age and suggested that next time, instead of protesting, he should go fishing.

Taking this advice in his stride, Mr Ryan deployed his wit by erecting a 'Gone Fishing' sign.

The message accompanied the veteran when he chained himself to a railway line in September 2018 to block a coal train from Newcastle. 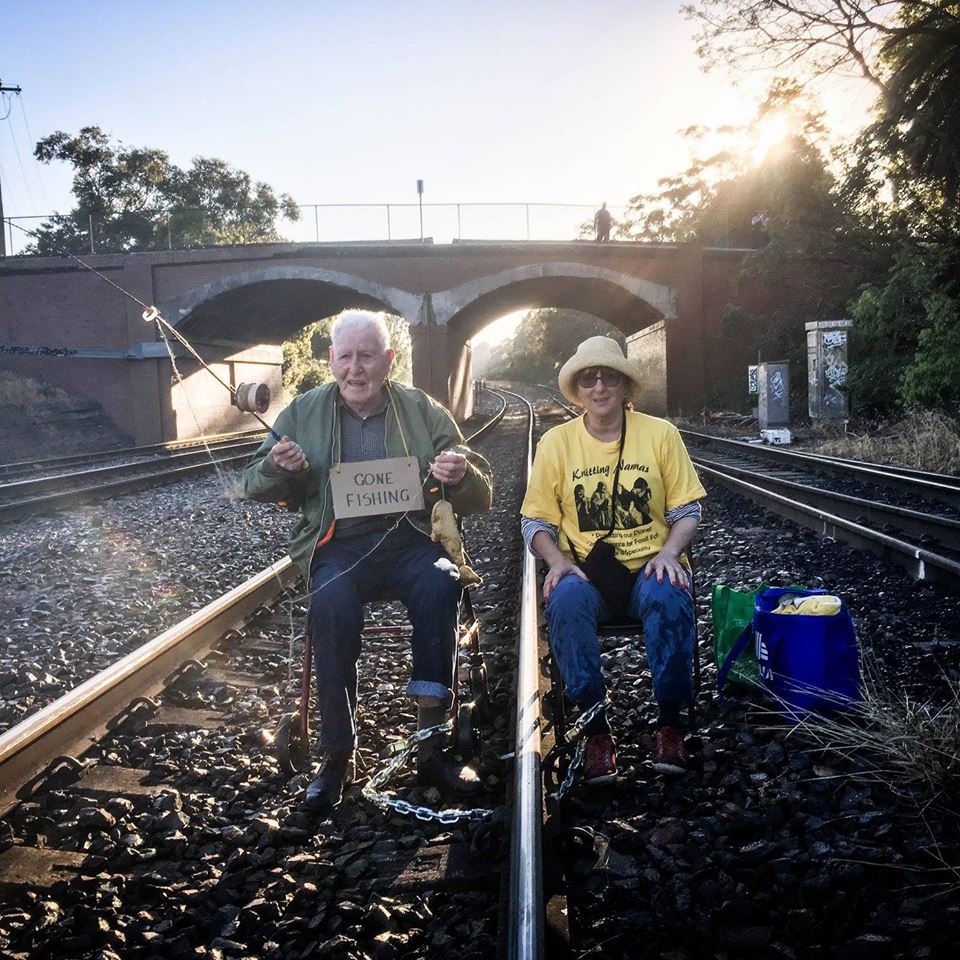 The much-loved campaigner's spirit was one of his most memorable and effective traits, according to Greenpeace Australia Pacific campaigner Jonathon Moylan.

"Bill Ryan was an absolute legend to all of us. And will go down in history as someone who never lost the determination to fight for a better world," he said.

Bill Ryan was an absolute legend to all of us. And will go down in history as someone who never lost the determination to fight for a better world

“He always said that he would continue fighting for action on climate change until the day he died, and that’s exactly what he did.”

Mr Ryan had a profound impact on many young people who he interacted with.

The climate activist was eager to inspire the next generation to participate in the democratic process, while also showing the youth that older generations were interested in their views on big-ticket issues. Ms Rhiannon recounts being at rallies with him when young people would take selfies with him, want to speak with him about his arrests and hear his life story.

This is leadership. The legendary #billryan inspiring the young. #schoolstrike4climateaction pic.twitter.com/T1fyV4hI53

RIP Bill Ryan, a veteran of world war and a warrior for climate change and environmental protection.
May you always be remembered!

“Bill is incredibly well-known, far beyond the activist movement. He inspired many people because he really was quite selfless.”

Mr Ryan's willingness to engage with all members of the community is backed up by Mr Moylan.

"One of the remarkable things about Bill is that he always spoke equally to everyone, regardless of their age, regardless of where they came from in life, because of his undying belief in justice and the need for change."